"Greasy movie"
Teen travels from the Netherlands to Bosnia in order to meet her ailing father, in this tender coming-of-age drama about the experience of immigration - on Mubi from Thursday, May 21st

Where are we? What are we looking at? Why is director Ena Sendijarević showing us this particular abstract image to open her film? Take Me Somewhere Nice opens with questions, and the sound of nature over this bland abstract image provokes our curiosity. And then, loud music interrupts the sound of chirping creatures and the camera cuts to an interior of a retail changing room, where Alma (Sara Luna Zoric), the films main character is trying on clothes with her mother. From here on in, nothing may be as it seems in Sendijarević’s film.

Raised by her Bosnian parents in the Netherlands, Alma is at that point in her life between girlhood and womanhood. While she hardly knows her father following his return to Bosnia, when she learns that he has been admitted to hospital, she decides to visit him one first and last time.

From the playful opening, the divide between Western and Eastern Europe echoes a contentious vibe throughout the narrative. Returning to Bosnia, Alma stays with her cousin Emir (Ernad Prnjavorac), who seeing her for the first time in years says with a familial affection, yet with it an air of indifference, “You’ve grown up”. She replies: “So have you”. Their relationship is a tense one, the struggle to connect palpable even, yet their familial roots are affirmed in a few moments that offers a heartfelt portrait of family. These moments are never saccharine or sentimental, rather they are earned through the genuine interactions Alma and Emir, and his friend Denis (Lazar Dragojevic) experience on their journey.

Beyond the emphasis on Alma’s return to her home country, the film addresses the theme of the globalised family. Carl Jung in his collected works wrote about how we assimilate ourselves into our society, adopting its customs and moral codes in order to belong. While the family network is there to support Alma, although Emir has to be pressured by his aunt and Denis to help his cousin, the globalised family functions as a dependable unit. There are nonetheless indications of fractures, and one can sense that Alma and Emir are from different worlds, although she does not feel wholly out of place, nor does she wholly fit in. 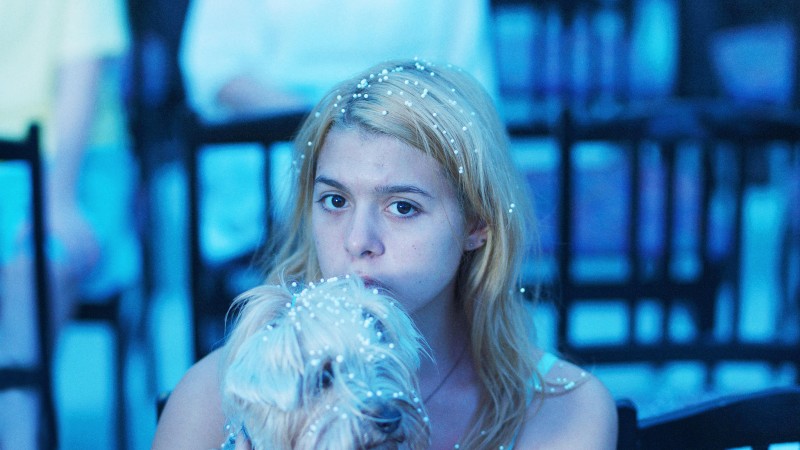 What makes her a fascinating character is that Sendijarević positions her at a contradictory in-between point. Even the way she and director of photography Emo Weemhoff shoot Zoric, it’s with a focus of the transition between girlhood and womanhood. They shoot the sexual scenes with a discretion, even as the camera frequently gazes over her body clothed only in a bikini when sunbathing, or fixating on her legs which are left exposed when she wears clothes from someone else’s missing suitcase she claims as her own. And in one scene she changes her shirt in the same room as Emir and Denis, and with her back to the camera, we see only skin and bra straps. Sendijarević determinately positions her in this period of transition, that accompanies an impression that there are shades of the fairy tale in the subtext of the story, where innocence is vulnerable and preyed upon by impure temptations.

Take Me Somewhere Nice captures a snapshot of that period of time before we know who we are. The characters may have self-doubts and frustrations – Denis questions masculinity as a dying breed, while Emir and Alma discuss the difference between nationalism versus patriotism, of hate versus pride. But outside of the political, Sendijarević captures the period of time that fuels our melancholic maturity of the youthful freedom to live, before life calls out to us: “Playtime’s over”. Once again it resists being saccharine or sentimental, and just as Emir and Denis are perpetrators of violence, so too do Alma and Denis experience the cruelty and violence of the adulthood world that awaits them, ready to humble their physical and spiritual bravado.

Take Me Somewhere Nice will offer a quiet dialogue to those familiar with the experiences of immigration and the feelings towards one’s home country. While for some, this dialogue will not be shared, Sendijarević’s film is an intriguing piece of filmmaking that is ripe for reencountering. Look beyond the story to the interactions and dialogue of the characters, the aesthetics and how the images and music express the themes and ideas, and what we may have here is a striking feature debut.

Take Me Somewhere Nice is available on Mubi from Thursday, May 21st.