Inevitably, romantic attachments occur, although these are frowned upon and quickly quashed by superior officers. Which leaves separated parties desperate for news of their transferred objects of affection. 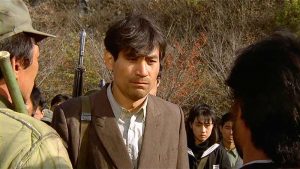 One particularly arresting sequence has Northern partisans shooting at Southern soldiers across an area of farmland until a child, seemingly oblivious to the very concept of warfare, wanders into the crossfire area. Both sides halt their shooting and come to a recognition of the humanity of the other. And that they both want the same thing: a unified Korea. Then the horrified farmer’s wife wanders into the area to rescue the child.

Elsewhere. though, the enemy are more distant: shooters to avoid and targets to hit. There are disturbing hints that Communism is an ideology to be blindly followed rather than seriously discussed. Perhaps this reflects something of the totalitarian nature of what North Korea later became as well as a South Korean perspective on the situation – very different from a more Western view of ideologically motivated conflicts elsewhere, such as the revolutionary Spanish Civil War soldiers’ left wing debates in Land And Freedom (Ken Loach, 1995). 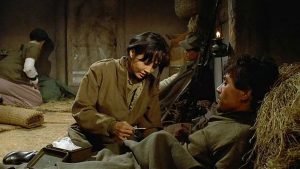 Much of the film takes place in extremely bleak, Korean winter conditions. Cold and starvation are never far away. One character has an infected leg turn black from the knee downwards. It must be amputated – and all that’s to hand is an axe. That done, it leaves the man in question unable to travel on with his fellow partisans. Should he surrender? Should he commit suicide rather than falling into enemy hands?

Despite its well over two hours running length, this never outstays its welcome. It conveys a real sense of what warfare must have been like in the mountainous Korean terrain and as such makes for compelling viewing. It was made at a time when South Korea was lurching uneasily towards democracy following the mass protests of 1987: its attempt to get inside the heads of North Korean fighters would probably not have been condoned some five years previously. The earlier Piagol (Lee Kang-cheon, 1955), also in this year’s LKFF, apparently takes a far more anti-Communist stance in its depiction of North Korean partisans.

Three families face tough times in post-war Korea, but the way their young people deal with it suggest things will improve – from the London Korean Film Festival [Read More...]