"Filthy genius movie"
German boy wishes to become an artist, but his desire is affected by the events of WW2 and its aftermath, in possibly the best narrative piece you will see this year - now available on VoD

What is art? Why do artists make art? These questions lie behind Florian Henckel von Donnersmarck’s latest film, like his earlier The Lives Of Others (2006) a German story exploring that country’s history and identity. It clocks in at over three hours, but don’t let that put you off because it needs that time to cover the considerable ground it does. Never Look Away spans the bombing of Dresden by the Allies in WW2, the liquidation of people considered by the Nazis inferior and therefore unfit to live and the very different worlds of post-war art schools in first East and later West Germany. This means it also spans two generations: those who were adults during the war, and those who were children at that time and became adults in post-war Germany.

Six year old Kurt Barnert (Cai Cohrs) wants to be an artist. He is taken to Dresden by his Aunt Elizabeth (Saskia Rosenthal from Lore, Cate Shortland, 2012) to see an exhibition of Degenerate Art mounted by the Nazis. He is fascinated. She tells him she rather likes the works displayed, but warns him not to tell anyone else. Later, he finds her playing the piano nude. She extols the mysteries of art to be found in life and exhorts him to “never look away”. She’s both creatively gifted and mentally ill. Being taken away in an ambulance to be incarcerated in a hospital she again issues that same exhortation. She will never leave the hospital system, thanks to Nazi doctors who have the power of life or death over their patients.

During the war, one night Kurt watches tin foil dropped by bombers around his home “to jam radio communication” before they drop bombs on Dresden in the distance, razing it to the ground. 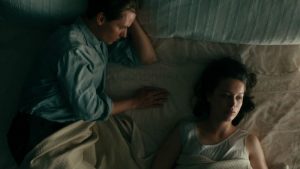 After the war, Kurt – now a young man (Tom Schilling) – works painting signs until his boss, impressed by Kurt’s artistic skill, has him apply to Dresden art school where he falls in love with Ellie Seeband (Paula Beer) whose gynaecologist father (Sebastian Koch from The Lives Of Others) regards him as inferior stock and tries to destroy the couple’s relationship. After a promising career as a Socialist Realist painter of murals, Kurt with Ellie in tow defects from East to West Berlin a couple of months before the Berlin Wall is built. Kurt becomes a student at that hotbed of modern art Düsseldorf Kunstakademie and later a famous artist.

It’s a lot more complicated than that, but it’s difficult to give away much more without spoilers. The whole is based on the life of internationally renowned artist Gerhard Richter, who has read the script by the writer-director and made one or two suggestions which were incorporated. However, Richter has subsequently disowned the film (despite not having viewed it). Kurt’s tutor at the Kunstakademie is based on equally celebrated artist Joseph Beuys. Von Donnersmarck describes the piece as a work of fiction, although a great deal of the material appears to be historically accurate with names changed. 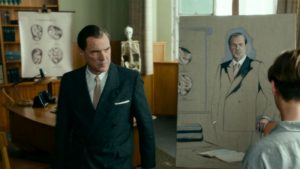 This is masterful storytelling with top-notch performances. More importantly, it seems to pick at the soul of a nation (Germany). There’s a lot of very nasty material festering beneath the surface and as you watch certain elements really start to get to you. Having watched it twice, this writer can attest to its being even more powerful on a second viewing: lots of little details elude you first time round as you grapple with the shocking overall story only to make themselves known second time around as you have a chance to take in the detail.

Never Look Away garnered two well deserved Oscar nominations earlier this year, for Best Foreign Film and Best Cinematography (it was shot by Caleb Deschanel whose impressive credits include The Black Stallion, Carroll Ballard, 1979). Alongside The Lives Of Others, which dealt with the Stasi (the East German secret police), it feels as if von Donnersmarck is building a panorama of German history through a series of historically grounded narratives of which this is only the second.

Finally, the German title Werk Ohne Autor translates literally as Work Without Author in reference to the artist’s claim that the photographs which form the basis of paintings “are just photographs”. This film suggests there’s a lot more to these apparently random images than that. Possibly the most effective slice of narrative storytelling we’ll see in the cinema this year. Supremely powerful, dirtylicious stuff.

Never Look Away is out in the UK on Friday, July 5th. On VoD on Monday, October 28th.

The (not-so-) beautiful game. A WW2 PoW who becomes Manchester City’s goalkeeper is faced with anti-German prejudice both on and off the pitch - in cinemas from Friday, April 5th [Read More...]