"Greasy movie"
Absurdist comedy mocks suburban life in the US, and the outcome is mostly cringeworthy - in cinemas Friday, November 22nd

Think John Waters doused in pastel colours and away from Baltimore. Somewhere just as American and yet more oppressively suburban. Now replace the Camp lewdness with stupefying middle-class obsessions. Everyone drives golf cars, lives in plush and spacious houses, dresses immaculately ironed clothes colour synced with other family members and wears braces, despite having perfect teeth. Welcome to the strange world of Jocelyn DeBoer and Dawn Luebbe, the writing and directing team who also happen to star in their latest movie.

The bizarre tone of the movie is set in the very first scene. Jill (DeBoer) gives away her baby Madison to her friend Lisa (Luebbe) in the middle of a children’s football game (or “soccer”, as they call it across the pond). There is no apparent reason for the bizarre gift, making it an entirely off-the-cuff gesture. Next we see Jill and Lisa kiss their respective husbands Nick (Beck Bennett) and Dennis (Neil Casey). Extreme close-up: tongues, lips and braces adorn the screen. Suddenly Lisa and Jill realise that they accidentally swapped husbands. They are engaging in labial action with each other’s spouses. Oops! No big deal, these things can happen. 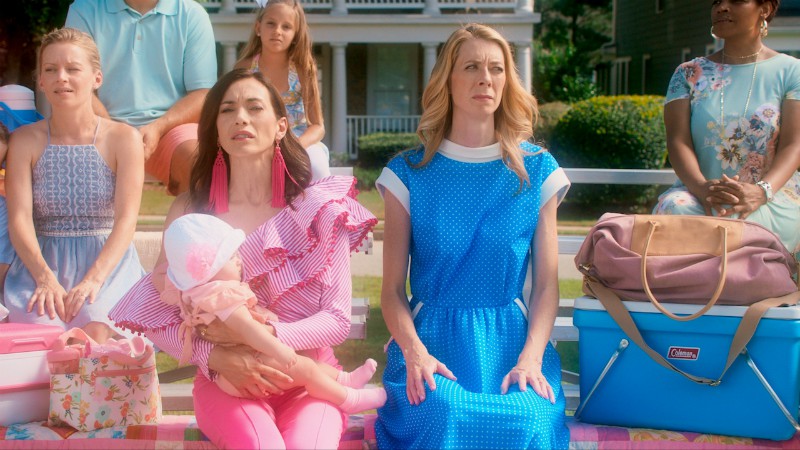 Eventually, Jill comes to regret giving away her youngest child. She asks for it back, but Lisa emphatically refuses to return it. Jill and Nick are only left with one child, a boy named Julian. But then Julian magically turns into a dog. This does not, however prevent him from living his life as usual. Canine Julian continues to go to school, and his father is keener than ever to play with his son in the garden. Meanwhile, Lisa gets impregnated with a football. Upon giving birth, she names the football Twilson. This is their third child (the second being the baby given away by Jill). The perfect nuclear American family!

Extreme politeness is a recurring topic. Four drivers stop at the crossroads because they all wish to give way to each other. Nobody budges. Jill always has an awkward smile printed to her face, and she’s never able to say no. She is the stereotypical soccer mum: jovial, elegantly dressed and annoyingly friendly. 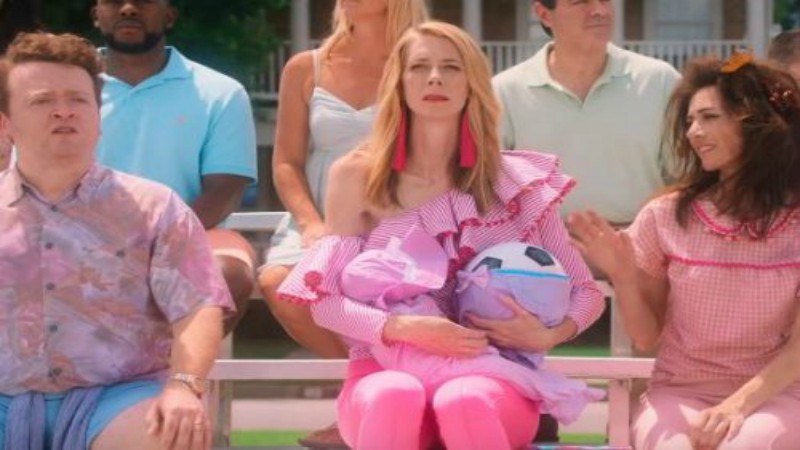 But Jill’s seemingly perfect marriage could soon come to an end. An envious and malicious female friend decides to sow discord and strife. Jill falls in her trap and snaps. In the final third of the film, we witness the collapse of wifehood, motherhood and all other attributes of the American woman from the suburbs.

The humour of Greener Grass deserves credit for its originality. A mixture of absurdity and fable, with a dash of deadpan and scatology. At first, the jokes are effective. The problem is that they gradually get a little trite and repetitive. And the absurd twists become somewhat gratuitous. It starts out as a promising critique of twisted American values, but it ends up a little lost in translation, with much of the commentary lacking any meaning whatsoever.

Greener Grass is in cinemas on Friday, November 22nd.