"Greasy movie"
New feature from Colombian filmmaker Alejandro Landes conjures up a psychedelic coming-of-age story, and a thriller with a generous dash of wackiness - now available on VoD

Growing up is never easy – but it is even tougher if you’re a member of a member of a paramilitary squad in the remote and wild countryside. Winner of the top prize on both the international fiction competition at this year’s Sundance, where it premiered, and the official competition at the London Film Festival earlier this month, the production follows the titular people – a group of youngsters who are part of a shadowy entity known only as The Organisation. When not receiving an intensive and vaguely ritualistic physical training, they are responsible for guarding one of its prisoners as well as a milking cow.

One day, trouble besets the group. First, one of them accidentally kills the cow, with the subsequent cover-up operation disrupting their sense of mutual trust. Then, in this agitated state of mind, a military advance from the Organisation’s adversaries forces them to abandon their usual post and hide in the dense jungle. From this point on, tensions escalate and, soon enough, allegiances are put to the test.

Away from society, their only link to the outside world is their American hostage, with whom they don’t speak much due to a language barrier. In the wilderness, galvanised by their belief system of their superiors, they make up their own social behaviour, sometimes defying gender norms and allowing for a free exploration of their sexuality. For all his masculinity and bravado, Bigfoot (Moisés Arias) is shown wearing fishnet stockings during a party. There’s enough to suggest that young lad Rambo (Sofia Buenaventura) has a crush on fellow squad member Wolf (Julián Giraldo) and some sexual tension runs in the interactions between Swede (Laura Castrillón) and Doctor. 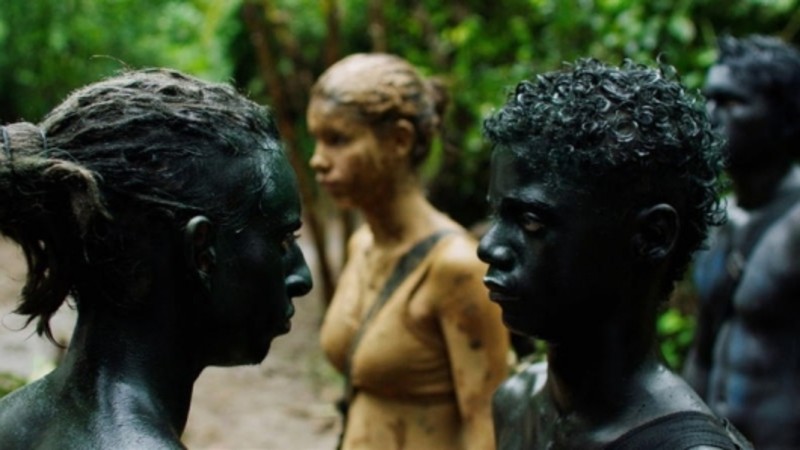 All of this takes a back seat when their relationship with each other starts to crumble. With the pulsating score by composer Mica Levi setting the tone, the fallout of the group brings to mind William Goulding’s novel Lord of the Flies with, with the individual needs of each member overshadowing collective goal. Bigfoot clearly wants power, Swede wants attention, Rambo wants comfort, and so on. Severed from everyone, including their military leaders, they dive into anarchy.

At turns, the feature resembles a less operatic Latin American answer to Apocalypse Now (Francis Ford Coppola, 1979). However, the way Landes uses the jungle as a major visual component in his protagonists’s psychological breakdown shares a lot more with fellow Colombian Ciro Guerra’s trippy Embrace of the Serpent (2016) than with Francis Ford Coppola’s classic.

Ultimately, Monos uses the growing pains of the group as a backdrop to an intense thriller that leaves a lasting impression. It is out in cinemas across the UK on Friday, October 25th. On VoD on Monday, February 17th.