"Filthy genius movie"
When a rookie cop with a body cam witnesses fellow officers commit a brutal murder, she must get the incriminating footage back to the station before they can stop her - now available on VoD!

Right at the start of this, Naomie Harris is walking along a New Orleans street when she’s stopped and harassed by two cops. For no reason. Well, there is a reason: she’s black and the cops are white. Except that, as she points out, she herself is a cop too. She’s blue. So reluctantly they have to let her go.

Alicia West (Harris) may be a rookie in her first weeks as a cop, but she’s hardly inexperienced, having served as a soldier in Afghanistan’s Kandahar. She’s joined the police at the same time as officers are being required to wear body cams and thinks these a good idea. However she underestimates the levels of violence meted out by police to members of the public and, conversely, by members of the public to police. Covering for her partner cop Kevin Jennings (Reid Scott) who had planned an evening with his wife before being asked to do a night shift at short notice, she finds herself working alongside grizzled veteran Deacon Brown (James Moses Black) and is shocked to see him use what she thinks is excessive force on a man outside a nightclub. It turns out, however, that the man had a gun and wouldn’t have hesitated to use it on her. 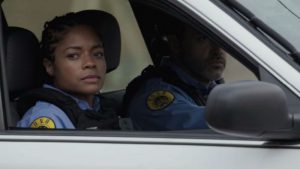 Later on their shift, Brown gets a call which leads them to a warehouse in a derelict urban wasteland. He tells her to stay in the car while he goes inside, but after hearing gunshots she goes in after him . The scene that comes next is the one upon which the film pivots. She sees someone shot – indeed, executed is not too strong a word – by a police officer before the gun is turned on her person and she falls several storeys. Worse, the bent cops have seen her body cam.

From here on in it’s a game of cat and mouse as witness rookie cop attempts to get cam and footage back to headquarters to upload it to the system while a combination of corrupt cops and criminals will stop at nothing to prevent her doing so. Shooter Terry Malone (Frank Grillo) informs the intimidating Darius (Mike Colter) that Alicia West shot Darius’ nephew Zero, so Darius puts the word out by mobile phone. So Alicia finds that not only the bad guys but the entire local community are after her as well. That includes the standoffish Missy (Nafessa Williams), the friend she couldn’t persuade to leave town with her all those years ago.

The film has a further ace up its sleeve in the form of Milo ‘Mouse’ Jackson (a memorable Tyrese Gibson) in whose general store West hides from the cops after every domestic door upon which she knocks refuses her entry. He calls the cops and consequently finds himself on the receiving end of racist abuse. Later, he turns out to be the one friend West has in her quest to deliver the footage and see justice done. 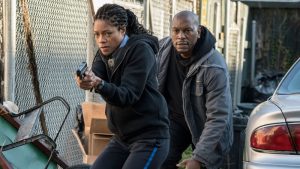 The tense action scenes which follow are skilfully choreographed and photographed and will keep you on the edge of your seat. As a gritty, cops and robbers film, this consequently does everything that’s required of it – and on one level, that ought to be enough. However, the indictment of racism underpinning the whole, with its privileged white cops and its ordinary black locals who don’t trust them because they simply can’t afford to is part of what raises the film to a whole other level. The urban deprivation of post-Katrina New Orleans further underscores all this. And better still, it’s not trying to make a Big Worthy Statement about the US and racism – the racism is simply there as an undercurrent of everything else that’s going on, a far more effective way of highlighting the issue.

Terrific performances by all concerned help no end. Naomie Harris completely convinces as the blue caught between the white privilege of her profession and the black community in which she grew up. Harris has never had a role quite like this – and what she puts on the screen is a revelation.

Finally, be advised that the trailer sells the film as a solid action film. In one sense, that’s true, that’s exactly what it is. However, churning out a run of the mill, bog standard industry trailer does the film a terrible disservice, implying it’s little more than Studio multiplex filler. Yet it’s so much more. This is a dirtylicious gem where you were expecting a mere, by-the-numbers action movie. Don’t miss.

Black And Blue is out in the UK on Friday, October 25th. Available on VoD in March. Watch the film trailer below: