"Greasy movie"
Director of Embrace of the Serpent delivers crime drama set in Colombia of the 1960s, 1970s and 1980s, as indigenous traditions are quickly corrupted by the booming drug trade - in cinemas Friday, May 17th

This family saga begins in Northern Colombia in the late 1960s, before the country became a prominent marijuana exporter. The Wayúu people are mostly untouched by modern civilisation. They speak their own language and engage in their indigenous traditions. Rapayet (José Acosta) courts his partner Zaida (Natalia Reyes) during an exuberant dancing ritual (one of the film’s most beautiful sequences). He’s then asked to pay a hefty dowry: 50 goats, 20 cows and a number of stone necklaces.

Rapayet finds a brand new approach to money-raising. That’s when the ancient culture begins to desintegrate. He sells marijuana to a young American hippie, who’s also campaigning against communism. Perhaps unwittingly, Rapayet wholeheartedly embraces the capitalistic ideal. He eventually learns Spanish and becomes a powerful drug lord, to the tribe’s matriarch’s dismay (a formidable woman called Ursula, played by Carmiña Martínez). The Wayúu traditions are quickly blended with drugs, heavy weaponry, vehicles and extensive violence. Rapayet becomes extremely rich and builds an impressive mansion in the middle of the desert fields. The building is a strange monument to wealth and tradition. 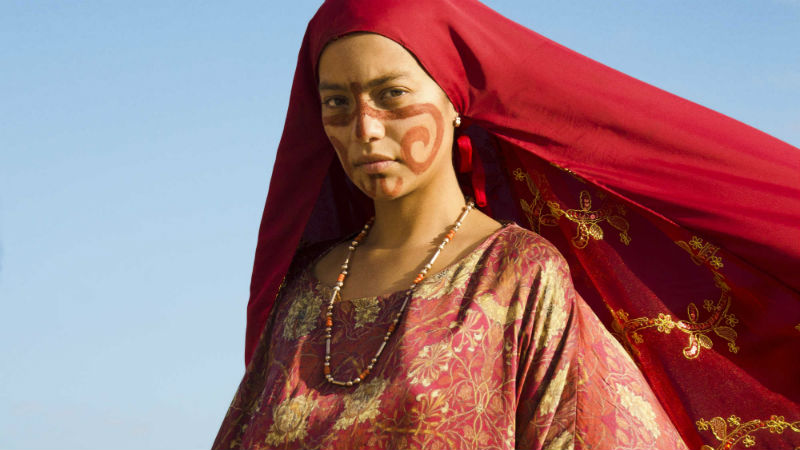 People are divided into three categories: the indigenous Wayúu, the alijunas (non-indigenous Spanish-speaking Colombians) and the gringos. Rapayet attempt to cling to his people’s traditions, but his alijuna associate Moises (Jhon Narváez) gradually defiles his native purity. Rapayet learns to kill, to negotiate with alijunas and gringos alike. Testosterone-fuelled greed spirals out of control and the threat of war between two Wayúu clans becomes a palpable danger. Very much à la Italian mafia (Scorsese’s 1972 The Godfather will probably spring to mind). The consequences of such war could be devastating. Rapayet wishes to prevent such armed conflict, but is the damage irreversible, is it now too late?

The director and crew behind the Oscar-nominated Embrace of the Serpent (Ciro Guerra, 2015) have created yet another cinematographically accomplished movie. The imagery is nothing short of breathtaking. The arid landscape provides a soothing backdrop to the fascinating indigenous rituals and also to the violent action. One of the final sequences has Tarkovsky’s The Sacrifice (1986) written all over it (I can’t tell you more without spoiling the ending for you). The film ends in the early 1980s 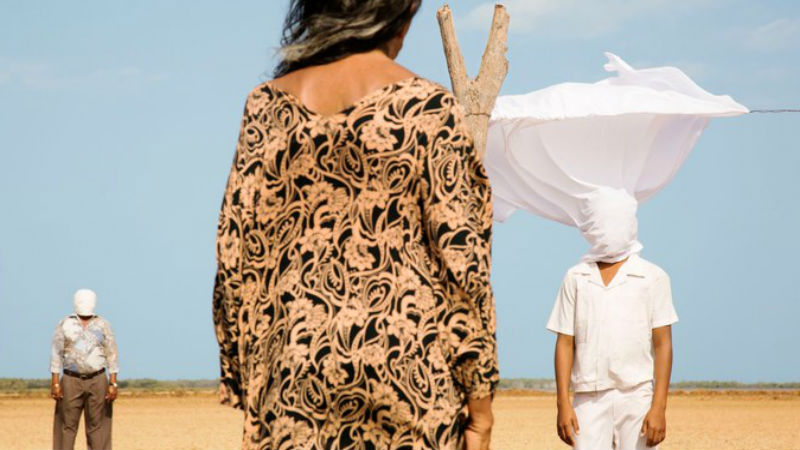 In a way, Birds of Passage is also a film about Colombia. About the country’s sudden obsession with drug trade. The Colombian economy boomed in the 1960s and 1970s after agriculture and farming were quickly replaced by marijuana plantations. But this wealth came at a price. Ancient traditions were polluted and perverted. Birds of Passage represents the twisted coming-of-age of a South American nation. Like a dysfunctional teenager who deep-dives into adulthood intoxicated with drugs.

Birds of Passage, however, does have a few problems. At 125 minutes, it does overstay its welcome. At times, the story becomes lethargic and laborious. Some of the acting is a little contrived. The film’s visual excellence is not on a par with the vaguely clunky storytelling devices.

Birds of Passage is out in cinemas across the UK on Friday, May 17th.