After making two big studio films, in 1994 Tim Burton opted for a change of pace with the real-life story of one of Hollywood’s most notorious directors in Ed Wood. The film, celebrating its 25th anniversary in 2019, is a loving recreation of 1950s Hollywood – but it’s not the glamorous town we’re used to seeing in fare like Singin’ in the Rain (Gene Kelly/ Stanley Donen, 1952) but instead the more drab and desperate workplace of the struggling filmmaker.

That filmmaker is Edward D. Wood Jr, said by some to be the worst to ever pick up a director’s megaphone. Played by Johnny Depp, Wood’s perception of his work is clouded by unflappable enthusiasm and determination. He is a man who is able to turn set-backs into opportunities: “Worst movie you ever saw?” he says in an exchange with a studio chief, “Well, my next one will be better!”

A failed theatre director and studio lot worker, Wood’s dreams one day of making his own films finally come to fruition after a chance encounter with one of his childhood idols, the Universal horror star Bela Lugosi (Martin Landau), who has hit one of the lowest points in his life.

Though Wood is overjoyed to have Lugosi in his corner, he is not as big a pull in the film world as he once was. Many in the industry think only of him as a has-been, others are surprised that he isn’t dead. At first Lugosi is in it for the money and the chance to work again, but he soon comes to see Wood as a friend. Landau’s scenes are among the most effective in the film, powerfully showing the tragedy of a faded film star.

Much of Ed Wood’s remainder follows the making of the director’s three-peat: Glenn or Glenda (1953), Bride of the Monster (1955) and Plan 9 from Outer Space (1959), as well as the bizarre and hilarious behind-the-scenes incidents that went on during their production.

Wood uses his first script to come out as transvestite, steals a giant model octopus in the dead of night and persuades the entire Plan 9 crew to be baptised in order to secure the funding of a church group – and all of this actually happened! 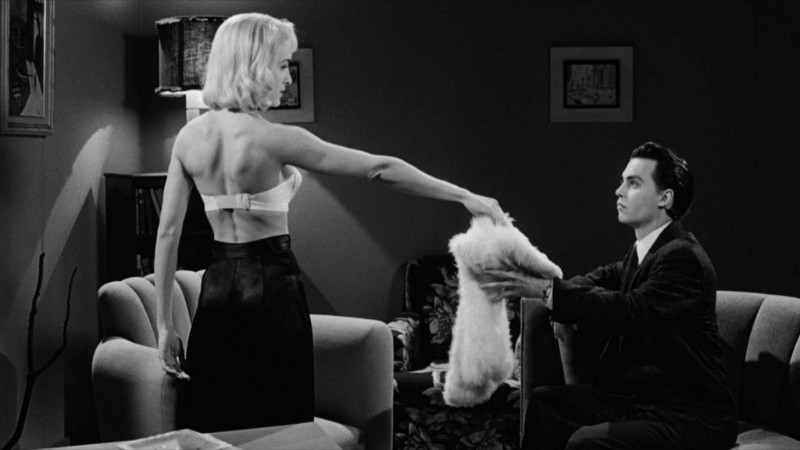 This is one of those films where you can feel the passion and enthusiasm just coming off the screen. It’s easy to see why Tim Burton responded to the project and directs it with such vigour: the story of a filmmaker, who befriended ageing film stars (Burton himself was friends with Vincent Price late in his life), breaking away from studios after bad experiences (Burton had previously been fired by Disney and Warner Bros.), determined to see out his vision.

Burton isn’t the only one who is on form here; Stefan Czapsky’s black-and-white photography is impressive to marvel at and there’s a well-crafted screenplay from the ever-dependable screenwriting duo of Scott Alexander and Larry Karazewski.

As Wood, Johnny Depp is full of fervour and energy and has no hang-ups in the cross-dressing scenes, which help him create a well rounded and thoroughly convincing character. The supporting cast, including Patricia Arquette, Bill Murray and Jeffrey Jones, also give their all.

What makes Ed Wood unique is that it isn’t the normal biographical film that follows its subject from their early struggles to their later superstardom, as Wood does not become the renowned director he aspires to be. Instead the film follows him from struggle to struggle until he reaches what would have been the happiest point in his life – somewhat cruelly, it then ends without showing his later years, which weren’t quite so happy.

On original release it was critically acclaimed but was not a financial success – a real injustice but one befitting its subject matter. Burton continued this B-movie inspired streak with his next film, Mars Attacks! (1996). Later, he returned to the hyper-stylised gothic fare he made his name with.

Even with some aspersions that have been cast over its historical accuracy, Ed Wood remains a boundlessly entertaining film made with true passion and expertise, and a quarter century later it remains one of the best and most overlooked films of the 1990s.

This review was written to coincide with the film’s 25th anniversary in October 2019. No re-release has been planned, but the film is widely available on various VoD platforms.