"Dirty gem"
Put on a happy face. Batman spinoff is a remarkable origin story / character study of one of that franchise's great villains, starring Joaquin Phoenix - on Amazon Prime (and now also on Netflix)

Arthur Fleck lives in a cramped apartment with his ageing single parent mother. He dreams of being a successful comedian. They regularly watch the nightly Murray Franklin Show on TV together. One time Arthur was on the show in the audience and was a big hit as a heckler. Later, a video recording of him doing an act in a club, described by Murray as proving you can’t be funny just by laughing, gets such a strong audience reaction that he’s invited as a guest on the show.

There’s such a lot going on in this film that you could omit certain elements and write a number of very different – but accurate – synopses. One would involve rich entrepreneur Thomas Wayne running for mayor, believing that any poor person can improve their lot just by trying harder, inspiring a Gotham-wide protest which culminates in anarchic riots by people wearing clown masks. Another would involve Arthur’s being mugged by a gang of youths, being given a gun by fellow clown Randall (Glenn Fleshler), shooting three well-heeled but seriously out of order suits on the subway and becoming a serial murderer who brands himself Joker on prime time TV. A third would involve a vulnerable woman being taken advantage of by a predatory male, with terrible consequences in the fullness of time. And so on.

Just as Batman Begins (Christopher Nolan, 2005) spent much of its running length on Bruce Wayne before he became Batman, so Joker is a film about Arthur Fleck before he became Joker. Joaquin Phoenix completely owns the character with his finely nuanced performance which might be reasonably said to put him in the same class as Robert De Niro. 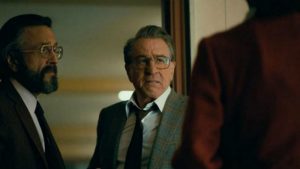 As it happens, De Niro here gives a performance in a bit part that, apart from its short time onscreen, is up there with his great screen roles. As Murray Franklin he plays a talk show host, so comparisons with The King Of Comedy (Martin Scorsese, 1982 – like this film, not in fact a comedy) are inevitable. They’re two very different films, but would make for a great double bill with the smaller scale The King Of Comedy playing first. Rep cinema programmers please take note.

There seems to be a racial undercurrent in that numerous people with whom Arthur communicates who seem to actually listen to him in the course of his everyday life are black, including his love interest in the form of Sophie (Zazie Beetz), the single parent mum in the apartment next door. The only white person Arthur feels really listens to him is a dwarf named Gary (Leigh Gill). 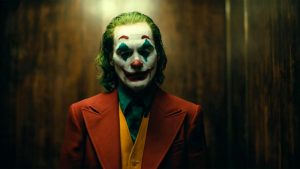 The film is extremely violent in places, though it never descends to the callousness of Making A Pencil Disappear in The Dark Knight (Christopher Nolan, 2008). That said, and even though it is effectively a Batman spin-off, its win at Venice may bring in a wider audience than your average DC superhero movie.

Sadly, it loses half a star for the bad decision to include a Gary Glitter song on its soundtrack. But otherwise, there is a remarkable, melancholy score. Indeed, everything else here is equally remarkable. (I would use the word ‘masterpiece’ were it not for the Glitter blunder.)

Joker is out in the UK on Friday, October 4th. On Amazon Prime in March. On Netflix on February 3rd, 2021.