This unique 2D animation opens with a discussion about how to catch a fly before splitting into two parallel narratives. In one, a severed hand goes on a quest in search of the body from which it has become detached. In the other, boy meets girl. This is the boy who at a later point in the film will lose his hand in an accident. The opening fly discussion turns out to be a flashback of the boy.

The hand shows great ingenuity as it escapes rats in a subway, climbs medical skeletons in a storage room and duels with an aggressive pigeon in a roof gutter. It has a pretty hard time of it physically. And when it eventually finds its body, reuniting with it proves far from simple. 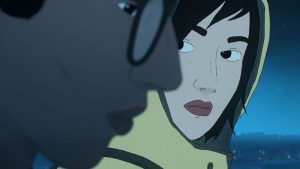 The boy, Naoufel (voiced by Hakim Faris in the seen French version and Dev Patel in the upcoming English dub), is working as a pizza delivery boy, a job to which he isn’t particularly suited. One night, he gets involved on a minor road accident which means he’s late with a delivery. The customer for whom he’s late is a girl, Gabrielle (Victoire Du Bois in French, Alia Shawkat in English), living in a block of flats. He gets into a long and involved entryphone conversation with her and, without knowing what she looks like, falls in love with her voice.

Naoufel then sets about trying to track Gabrielle down. This leads him to her ailing grandfather who he talks into giving him a woodworking assistant position in the man’s workshop. This turns out to be his dream job. But he initially wants the job to be near the guy’s granddaughter. And then these relationships go horribly wrong. 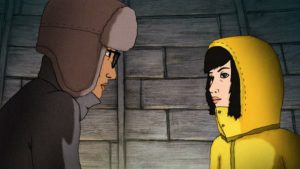 This will keep you guessing as to how the hand got severed and how the whole thing is going to work out. En route, the plight of the hand searching for its body will keep you riveted as it undergoes a series of perilous scenarios, while the parallel story of the boy, the girl and the grandfather proves genuinely affecting. Assorted flashbacks revealing elements of the boy’s childhood and his relationship with his father also prove illuminating.

It’s difficult to know how the film would play out as special effects live action – but as 2D animation, it works just fine. It’s not a horror film, more a sort of action-adventure, existential romantic drama, captivating in the relationship parts and thoroughly compelling throughout.

Dying in the middle of a busy road, a dog looks back on her life and the series of people who owned her in this unusually vibrant and colourful animated movie from Annecy [Read More...]