"Filthy genius movie"
Think clowns don't get dirty? Real-life story of Brazilian television clown exudes charm, nostalgia, swagger and, dare I say, sensuality, plus it's one of the best films you will see this year - in cinemas Friday

We regret to inform you that Pennywise has been uncrowned and also stripped of his title as the dirtiest clown ever. The accolade has been rightly claimed by Brazilian Bingo. The difference is that instead of scaring and killing children, his South American counterpart subverts childhood in a very unusual way. He infuses it with swagger, malice, sensuality and a dash of naughty humour. And he’s also a little Camp. Most Americans and Europeans would cringe at the teachings of this very unusual prankster.

The character is in based on the real story of Arlindo Barreto, the first Bozo (The American clown character, which never featured on British media) on Brazilian television, back in the 1980s – his name was changed to Bingo on the movie in order to avoid legal trademark issues, and also for the sake of more artistic freedom. Bingo: The King of the Mornings is a partly fictionalised account of how Barreto had to twist the American clown in order to fit in with Brazilian culture. 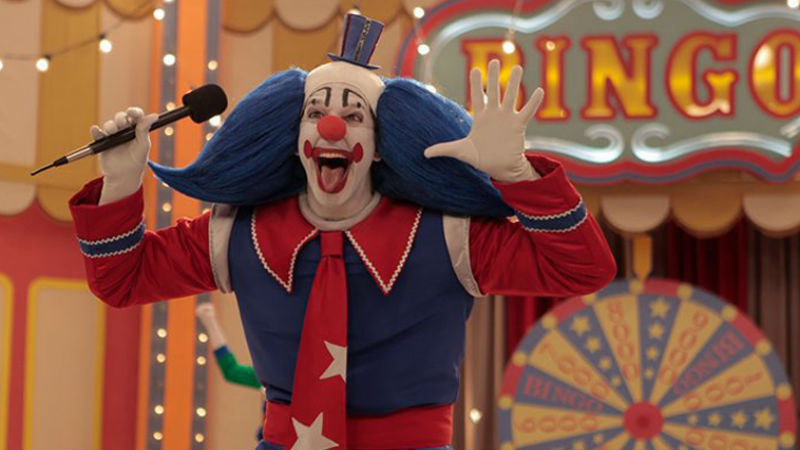 Instead of the well-behaved American presenter, his Brazilian franchise actively encouraged children to be naughty and used bizarre antics, which would be mostly frowned upon nowadays. He ordered children at home to engage in pillow fights, invited the Brazilian Bum Queen Gretchen to shake her booty, and occasionally challenged, mocked and even humiliated the small members of the audience of the TV show, which was transmitted live every morning for about four hours. At first, the producers panicked at the unorthodox practices, but the soaring rates mandated that they allowed Augusto to carry on.

This is a masterpiece of Brazilian cinema, blending nostalgia, sensuality and failed fatherhood. Vladimir Brichta delivers an energetic and profoundly moving performance as Augusto/ Bingo, a young performer keen to make it big in order to please his mother (an artist of yore who feel into oblivion, played by an equally touching Ana Lucia Torre), while also neglecting his own child. His son Gabriel regrets that his father has time for every child in the world, except for him. To make things worse, he’s not allowed to disclose his father’s job to his friends, as Bingo’s real identity is legally protected. The child actor Caua Martins also does an outstanding job, not particularly easy for a multilayered and complex role.

Bingo: The King of the Mornings delves with a topic familiar to Brazilians and the world: the hyper-sensualisation of pop culture in the largest country of Latin America. Brazilians exude passion, suggestiveness and even voluptiousness, and a children’s TV show is also game. The real-life children’s TV presenter Xuxa Meneghel had to adapt her sexy wardrobe once recruited for a American show, in a classic example of how Brazilian sensuality is often a no-go abroad.. The film doesn’t discuss this, except that it quickly alludes to Xuxa, replacing her real name with “Lulu”. 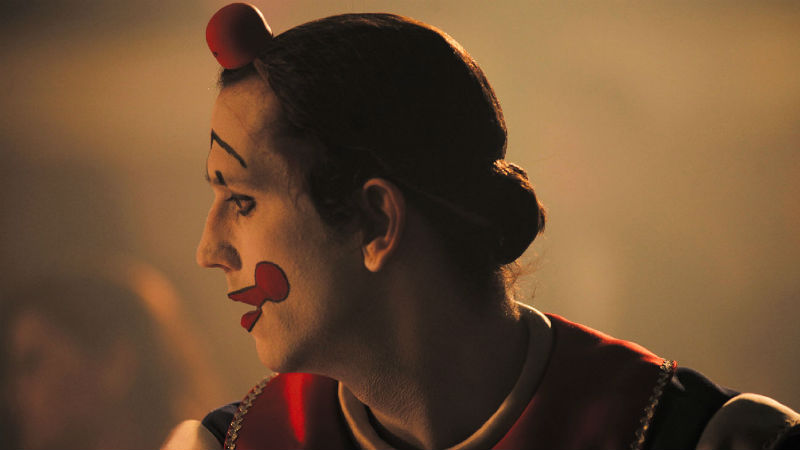 This sensualisation, however, is not synonymous with sexual freedom. Brazilians are not as sexually liberated as the world perceives. In fact, Brazil is a very conservative society, in many aspects. Augusto himself encounters such paradox when he tries to bed his beautiful producer Lucia (Leandra Leal). She’s an evangelical who refuses to have sex before marriage.

The second half of the film sees an abrupt change in Augusto’s life, as his relationship with his son collapses and another tragedy suddenly strikes. He quickly hits the bottle and also begins to snort copious amounts of cocaine, in preparation for his show. This is no laughing matter. Brichta’s performance is impeccable. He’s sexyand , he’s able to make audiences laugh and also cry. The trappings of fame and a sudden fall from grace will have a major impact on his life. Will Augusto have to abandon television? Will his character live on? You might be surprised with the answer. Go watch Daniel Rezende’s first film. It’s simply unmissable!

Bingo: The King of Mornings is out in cinemas across the UK on Friday, December 15th. Stay tuned for our exclusive interview with the filmmaker in the next few days.