"Dirty gem"
Five decades after its original release, the New Hollywood trailblazer with kitchen sink flavours remains as powerful and evocative as ever - BFI re-edition is in cinemas Friday, September 13th

On May 12th 2019, the New Hollywood era – arguably the greatest epoch in cinematic history – categorically entered its fifties, for it was on this day in 1969 that Dennis Hopper’s Easy Rider premiered at Cannes. Bonnie and Clyde (Arthur Penn, 1967) and The Graduate (Mike Nichols, 1967) may have preceded it, but Easy Rider would become the initial bookend of the era.

However, just 13 days later, on May 25th 1969, John Schlesinger’s Midnight Cowboy opened in New York City. It had neither the indie micro-budget nor the free-spirited zeitgeist of Dennis Hopper’s film, but it still seeped transgression from its every grimy pore. Five decades later, the BFI’s stunning 4K restoration reminds you that Midnight Cowboy’s coming-of-age story retains much of the wit, sadness and visceral squalor that makes it a foundational entry in the New Hollywood canon. 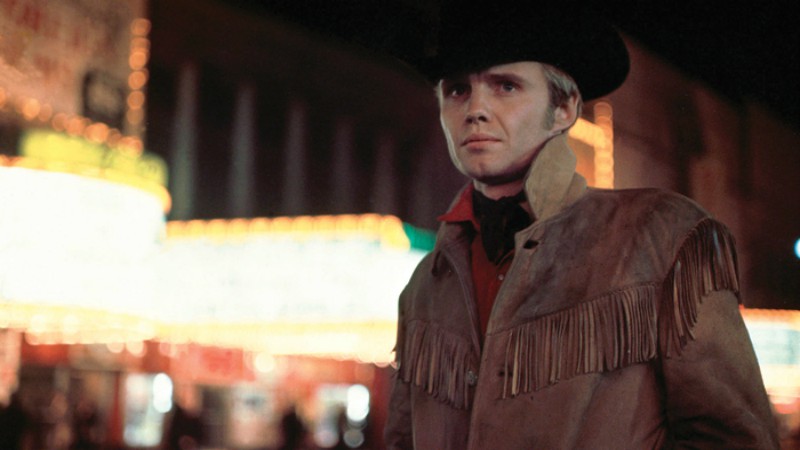 Very much a New York film, one is hard-pressed to remember a colder, bleaker depiction of the city, even after The French Connection (William Friedkin, 1971), Serpico (Sidney Lumet, 1973) and Taxi Driver (Martin Scorsese, 1976). This is because Schlesinger took the stark realism of the kitchen sink movement and applied it to this decidedly American context. Indeed, it may not have captured the pan-cultural moment like Easy Rider, but Midnight Cowboy certainly preserved the zeitgeist of 42nd Street – a shifty, sleazy place before the gentrification of the early 1990s.

This gritty aesthetic, however, is also imbued with surreal dream sequences that are sometimes eerie, often ambiguous – always sad. We first see them as Joe Buck (Jon Voight) begins his cross-country trek; he brims with enthusiasm and ingenuousness, yet the recesses of his psyche reveal a sinister, withdrawn family and a terrible assault upon himself and a young girl – the consequences of which are unknown.

The best of these sequences occurs when Joe and Ratso Rizzo (Dustin Hoffman) are established hustling partners dreaming of Florida – it’s a bittersweet joy. Their dank, desperate gamble in a New York hotel is juxtaposed with the ethereal Florida scene that they hope will result from it, but as Joe’s presence causes a ruckus in the hotel, the vision in Ratso’s head also tumbles in a crescendo of snappy edits aided by the quirky tempo of John Barry’s Florida Fantasy. 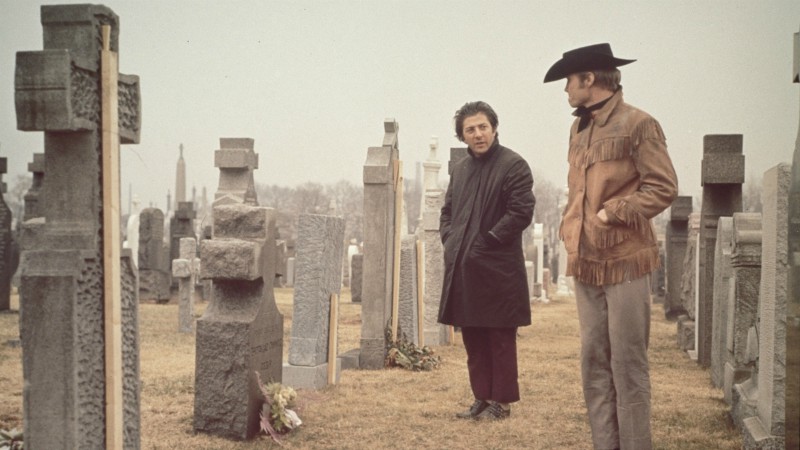 Indeed, it is John Barry’s hauntingly evocative score – along with Harry Nilsson’s wistful Everybody’s Talkin’– that leaves the largest impression on many viewers, and rightly so. However, I hope that the BFI’s deft re-mastering of Midnight Cowboy will remind audiences of just how absorbing Joe and Ratso’s relationship is, of how the layers of pathos and humour pepper their abject condition with hope, albeit a mere semblance. After all, Voight and Hoffman deliver some of their finest work here, and Waldo Salt’s screenplay is laced with wit and free of narrative baggage. This, teamed with Schlesinger’s realist yet experimental style, causes Midnight Cowboy to be a defining, resonant classic of the New Hollywood period.

The 50th anniversary 4k re-edition of Midnight Cowboy is in cinemas Friday, September 13th. Below is the original film trailer from 1969:

Still riding fast half a century on!!!

As Dennis Hopper's classic Easy Rider turns 50, Steve Naish examines the film's influence on the work of other directors (such as Tarantino) and argues it still resonates now, in the light of Trump's racist rhetoric [Read More...]

Is violence the only way out?

Jack Hawkins lists five dirty films where the characters resort to shocking violence as an unexpected cathartic device, as they snap under various types of pressure [Read More...]