"Dirty gem"
A single building in Cambodia is used to interrogate a changing nation, in this quiet yet deeply affecting movie - live from Locarno

The White Building, built in 1963 by the Cambodian government in collaboration with the French-Russian architect Vladimir Bodiansky, was once a true example of proper low-cost housing and New Khmer architecture. In 1975, the building was abandoned when the brutal Khmer Rouge cleared the capital city of Phnom Penh, only for it to become a hub for artists and civil servants after 1978. Afterwards the once grand building fell into disrepair, lined with prostitutes and drug addicts. Documentary Last Night I Saw You Smiling shows us the final days of the building after it’s bought by a Japanese company with help from the Cambodian government and all 493 families are slowly cleared out.

Like in Hotel Jugoslavija (Nicolas Wagnières, 2017), this single building is used to explore the state of a nation; both as it exists in reality and as it existed in the people’s popular imagination. Old ladies show us pictures of the building as it used to be, their warm nostalgia aptly complemented by sentimental songs playing over the radio. 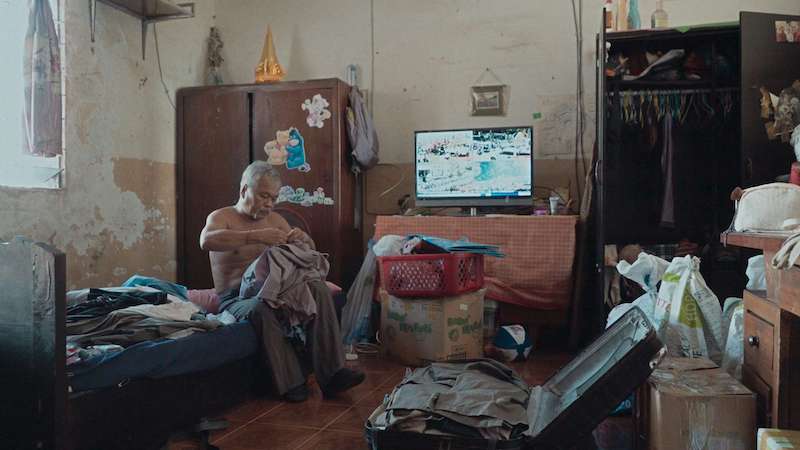 Cambodian resident Kavich Neang may have a personal stake in the matter — his own father is a resident of the building — but he takes an inclusive approach to depicting its residents. Spanning from young, seemingly oblivious, kids running up and down the hallways to old ladies complaining that they have nowhere else to go, Last Night I Saw You Smiling paints a panoramic and melodic picture of a place slowly fading from view, doubling up as commentary on a world that ultimately favours capitalist over socialist values.

For inhabitants who have strong memories of the brutal Khmer Rouge regime, these developments are doubly-painful. It’s as if the government hasn’t learned any lessons from its past. As one inhabitant says, it feels like the same thing, only this time they have trucks, have to clear out the rooms themselves, and are getting paid for their troubles. While the government may use the money payout as justification for the redevelopment, it’s evident that the cheques aren’t big enough. Some even arrive too late for some residents who cannot afford to move any of their things. Additionally, while the disused nature of the building may have justified its redevelopment, the fact that these residents are given little say in the matter leaves a sour taste in the mouth.

Using boxy, static frames, Kavich Neang allows his subjects to speak for themselves, even when they’re not saying anything at all. Whether its watching TV, listening to the radio, bickering amongst themselves, or cleaning up, we get a true sense of an authentic lived-in place. By slowly accumulating these images on top of each other, the failures of government policy are quietly laid bare. Now construction has begun on a new 21-storey building, totalling $80 million. The film doesn’t directly state whether any of these former residents will be able to afford one of these fancy new apartments. Yet it doesn’t need to. It speaks entirely for itself.