Tell It To The Bees

"Greasy movie"
A lesbian, romantic drama set in post-war Scotland, a time when such things were frowned upon and never discussed, is on VoD on Monday, November 11th

In 1952, Jean Markham (Anna Paquin) returns to the small Scottish town where she grew up to take over her father’s medical practice as the local doctor. She left in her teenage years under scandalous circumstances which, we’ll learn later, involved falling in love with another girl in an age when such things were frowned upon. When young Charlie Weekes (Gregor Selkirk) turns up at her surgery with a minor injury, recognising he may be going through something of a hard time she takes him back to her house to show him the bee hives she keeps in her garden. She tells him you can share any secret with the bees and they’ll understand.

Charlie’s mum Lydia (Holliday Grainger) isn’t having an easy time of it either. Her husband Robbie (Emun Elliot) became a changed man during the war and their relationship is over. He has to all intents and purposes moved out of the family home. Lydia holds down a factory floor position at the mill where her less than sympathetic sister in law Pam (Kate Dickie) works, but is behind on the rent and eviction is not far off on the horizon. Lydia’s fury at the new doctor taking her son to his house is mitigated when she meets Jean and discovers the latter is a woman, not a man. 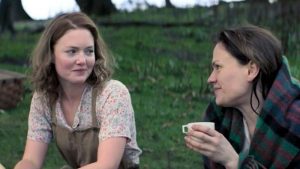 Once Lydia and Charlie are evicted, Jean gives them lodging. When Lydia is laid off, Jean gives her a job as housekeeper. On news of her eviction, Lydia – a keen dancer – heads to a local pub, hits the drink and is all over the first man to join her on the dance floor. Charlie spots her through the window and feels betrayed. If you’ve seen the trailer or publicity stills which accurately pitch the film as a lesbian romance you’ve got a pretty good idea where this is going – although the narrative has a few surprises in store towards the end.

Henrietta and Jessica Ashworth’s adaptation of Fiona Shaw’s novel proves effective for the most part, capturing the feel of a small town where everybody knows everybody else and no secrets stay hidden for long. In passing, it delivers believable portraits of bailiffs working for landlords and the harsh, shop floor working conditions of (mostly female) mill workers. Doctors working within the newly founded NHS find that patients can’t quite get used to the idea that medical treatment is free and consequently are slower in seeking advice or treatment than they might be today (at least, while we still have an NHS free to all at the point of need). Finally, in an unexpectedly harrowing subplot, a backstreet abortion goes wrong threatening to kill off a minor character.

Beyond the young Charlie, the few other male characters are deftly sketched if mostly on the fringes of the narrative. Lydia’s husband Robbie is a brute given to occasional bouts of violence, unable to relate to his wife yet still tragically in love with her. He contrasts sharply with Jean’s kindly solicitor friend Jim (Stephen Robertson) who proposes to her then remains genuinely interested in her well-being even after his advances have been rejected. Elsewhere the boy with whom Charlie plays in the woods talks to him about “a dirty dyke”, the only words on offer to describe Jean’s sexual preferences. 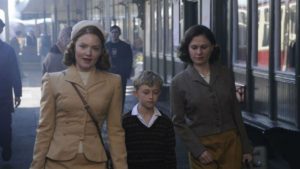 All the performances are top notch (why doesn’t Kate Dickie get more decent roles?). A mention should also go to the decision to shoot with real bees rather than special effects: the bee wrangling and cinematography yield spectacular results.

The one place the film trips up follows a scene in which the outraged Robbie plunges his fist through one of Jean’s hives. If you kept bees and discovered someone had done this, you’d most definitely have a reaction. But, inexplicably, Jean doesn’t ever appear to notice this has happened. (It may not be a script error – it’s possible this material was there and either not shot or cut out after shooting to bring down the running length.) It’s an irritating plot hole that knocks the film down at least a star on our rating. Which is a shame because, that sole misstep aside, the whole thing works as a serviceable, small town, post-war, lesbian, romantic drama. With a young boy’s perspective thrown in alongside those of the two women for good measure.

Tell It To The Bees is out in the UK on Friday, July 19th. On VoD on Monday, November 11th.

The history of LGBTQ+ Britain in the past 50 years is the central pillar of this sobering doc, which both celebrates and raises questions about the achievements of the community - now available on VoD [Read More...]