So Long My Son

"Dirty gem"
Wang Xiaoshuai's weepie is a highlight of Berlinale, with a vastly and rapidly changing China the political backdrop for intense family tragedy - now also available on Mubi

It’s not uncommon for a film festival to leave its crowning jewel for near the end of the festival, and Berlinale 2019 may just have found theirs in the form of So Long, My Son, the epic (in terms of both content and duration; the film has 180 minutes) family saga tearjerker from Chinese Wang Xiaoshuai. Across four decades of turbulent Chinese society, Wang studies a married couple, using the death of their son as a focal point around which to subtly explore the single-child policy and the impact of the Cultural Revolution.

The unconventional structure zips back and forth through different time frames, gradually moving along a central timeline. The story occurs in episodes which each have the feel of their own short story, but which fill in the details of the other things we have seen. Wang leans heavily on dramatic irony, raising the tension as we wait for truths to emerge. One wonders if he couldn’t have found a way to cut 15 minutes or so from the run time, so languid are the first two hours. It isn’t until the final 50 minutes that So Long My Son really pays off every beat he’s set up. Like a Koreeda film, revelation is piled upon revelation, disarming you with one bombshell and then slapping you with another. Wang even uses the flashbacks to abet this by undercutting the outcome of one scene with the reality of the past or present. 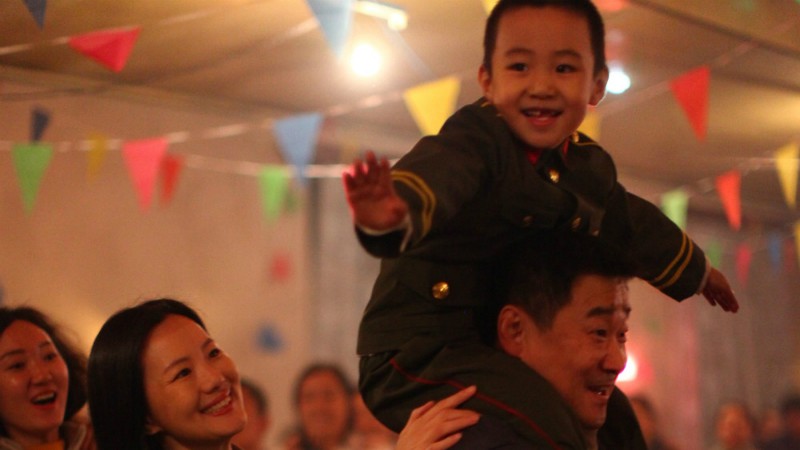 The seriousness and the attention to naturalistic detail allows for slight detours into almost hallucinogenic images of memory. After the central couple go looking for their missing adopted son in a thunderstorm, they return to their flooded house and the family photograph floats towards them as though Baby Moses in the basket. When that boy is a little older we meet his punk, motorbike riding friends, who hang around the family house and appear like a mad apparition before the trash heap landscape. It’s a nod by Wang to the drifter youths he depicted in his earlier films.

Sometimes Wang takes the distance of a public spectacle. He rhymes shots by framing corridors in a particular way to remind you of a particular day in the lives of the characters, and repeatedly uses the Scottish poem Auld Lang Syne to haunting effect. Occasionally he’ll follow a peripheral character from this incredible ensemble cast and reveal their hidden depths. Then it ends with a note of blissfully ignorant hope, which recalls Make Way For Tomorrow (Leo McCarey, 1937) in its graceful affection. This is challenging in its length and bleakness, and probably won’t find much of a cinema life in the UK, but it should, because So Long My Son is one of the most skilful and rewarding films of the competition, and a guaranteed tearjerker.

So Long My Son showed at the Berlinale in February, when this piece was originally written. It won both the Best Actors and Best Actress prizes. In cinemas Friday, December 6th. On VoD in April. On Mubi in July/August