"Dirty gem"
Is this Big Brother's grandfather? The surviving members of a very strange social experiment are brought together nearly a century later: the 11 strangers were made to live on a raft for three months cut off from the rest of the world - now available on VoD

You can take a human out of civilisation, but can you take civilisation out of a human? This was the key question anthropologist Santiago Genovés asked himself during his work as a professor and scientist of human nature. He was on a plane to Mexico City in the early ’70s when terrorists hijacked the controls and landed in Cuba. Most people would be terrified by the experience. Instead, these optimum conditions gave him the idea for a radical experiment. What would happen if you put a bunch of people together completely removed from the rest of humanity?

His idea sounds like a mix between reality TV and Werner Herzog. He put out a call in international newspapers for 10 people to join him on a motor-less raft sailing from the Canary Islands to Mexico. The key question he wanted to answer: “How do we achieve peace on earth?” To simulate the world, he ensured gender balance (five men and six women) and a mixture of religion and ethnicities, with participants spanning from Uruguay to Angola to Japan. This very unorthodox initiative took place in 1973, and it was called the Acali Experiment. 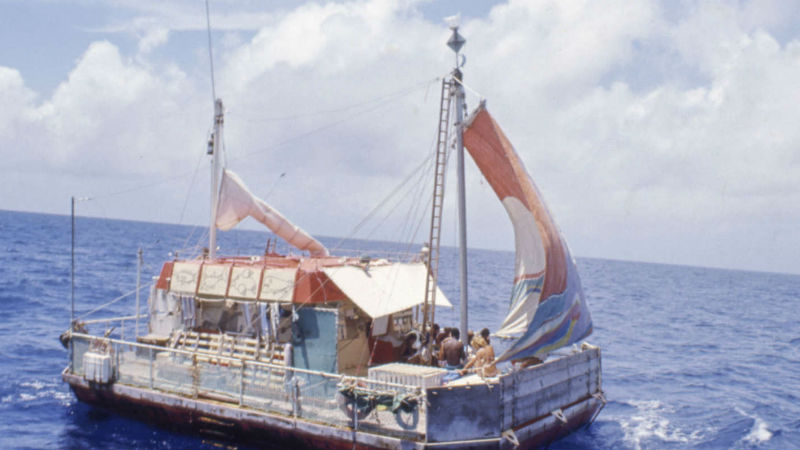 The Raft looks back at this bizarre social experiment, which inquired into the very heart of human nature and found some startling results. Mixing silent film footage of the expedition with the surviving members recreating key moments on a life-size reconstruction of the boat, it’s a fascinating look into human nature, and not in the ways one would conventionally expect.

He flipped patriarchal norms by giving all the important jobs to women. He found the only female sailor in Sweden to helm the ship. Men were left to scrub and clean. He wanted to see if the world would be a more peaceful place if women were in charge. It seems to be so, but not in the way the domineering scientist expected – who is smartly revealed to be a character of exceptional hubris. Sadly, with the exception of Japanese participant Eisuke (who boldly claims he would’ve gladly dated all the women) all the men have died – so we don’t get to hear their side of the story.

Santiago’s writings, long dead, serves as narration, read by Daniel Giménez Cacho (the star of Lucrecia Martel’s 2017 Zama). He makes observations on every aspect of the trip; spanning from participant’s moods to their sex lives and menstrual patterns, analysing if the environment, including the weather, wind speed and lunar movement, has an impact on their activities. He waits and waits for violence to break out, and when it doesn’t, he finds novel ways to ramp up the tension. 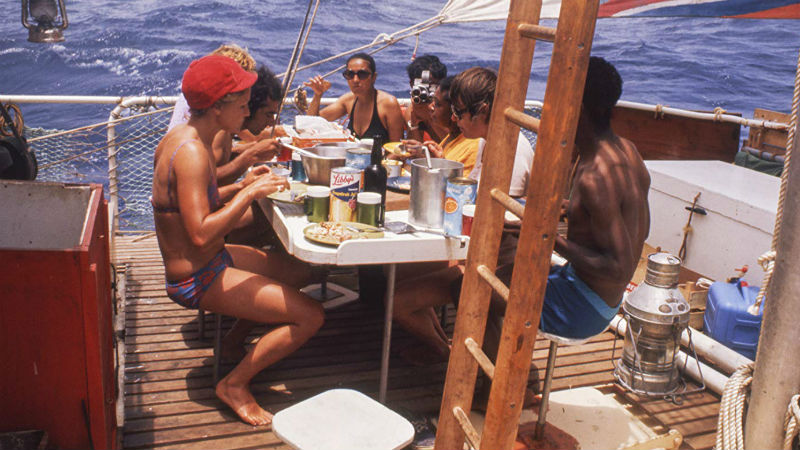 In many ways the experiment predates modern reality TV, shows such as Big Brother which put people together in an isolated situation to see how they interact. Like Big Brother, which at first started as a fairly innocuous human experiment before ramping up the competitive aspect, Santiago quickly realises that he has to manufacture conflict in order to get the result he wants – including revealing everyone’s worst secrets and true thoughts about each other. He identifies sex as one of the main things men fight over, but sex is treated on the boat as a fun dalliance rather than anything worth getting stressed about. Most memorably, an Israeli doctor claims she slept with two of the men for “friendship” rather than anything else. The whole thing would work brilliantly as a movie directed by Swedish filmmaker Lukas Moodysson.

Between recreations, director Marcus Lindeen (who’s also Swedish) has his subjects talk to each other instead of asking them questions himself. This effective approach allows them to really open up and share their feelings about the experiment. Their experiences all differ and are informed as much by character, religion and ethnicity as much as anything else, proving that optimum testing conditions can never truly exist. My sneaky feeling is if you put 10 completely different people on the same raft, an entirely different story would emerge. I just hope someone at Channel 4 has seen this.

The Raft is in cinemas across the UK on Friday, January 18th. On VoD Monday, May 13th.