"Greasy movie"
Late-career biopic following a UK tour of Laurel and Hardy successfully rescues and celebrates slapstick and old Hollywood nostalgia, but it also lacks a little punch (or slap?) - in cinemas on Friday, January 11th

This is as profound and intimate as a professional relation gets. The comedic duo Stan Laurel and Oliver Hardy enjoyed a special relationship (Stan was British and and Ollie was American). A bromance. An intense love and affection for each other. They were truly inseparable. Stan & Ollie follows the two artists on what would unwittingly become their swan song tour, as it’s loosely based on AJ. Marriott’s book Laurel and Hardy: The British Tours.

Nearly all the action takes place on this side of the pond, as the artists perform in medium-sized theatres across the UK and then Ireland (although we never see the Irish performances, just their arrival by boat and a rapturous welcome at the port). The world’s greatest comedy team were then both in their 60s, and the years have taken their toll on them. Particularly on Hardy (John C. Reilly), who’s obese and suffering from heart problems. Stan’s (Steve Coogan) health is far more robust, but it’s unlikely he could ever perform without his other half. Or could he? 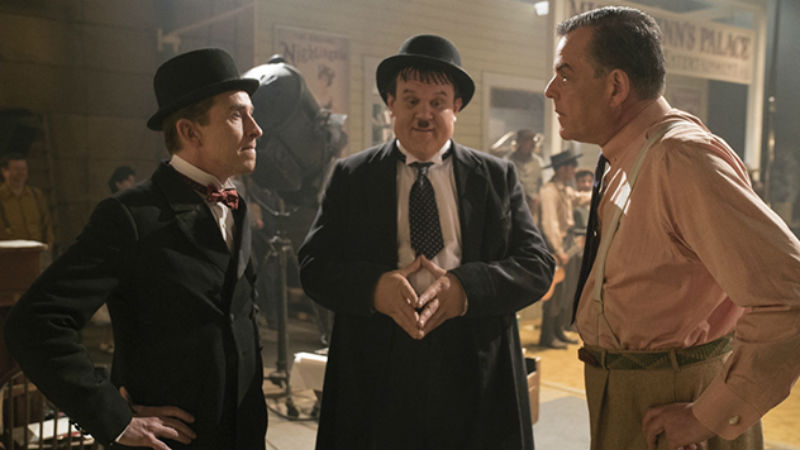 Most people in Britain in 1953 (the year in which the film takes place) believed that the duo had already retired. Some fans are met with surprise upon finding out that the real Laurel & Hardy are touring the UK (they had assumed it was a tribute act). At first Stan and Ollie are disheartened at the half-empty theatres, but the number begin to soar as the tour gains visibility and momentum. Plus, there’s also a film on pipeline. Could this adventure culminate in yet another addition for their extensive portfolio of more than 250 films?

Stan & Ollie deserves credit for rescuing old-fashioned slapstick for modern audiences. Our humour has changed enormously since. Our jokes have become darker, more cynical and complex. Someone kicking someone in the buttocks or dropping a large suitcase down a flight of stairs is hardly funny these days. Yet the film renders the humour nostalgic and charming. You will catch yourself smiling throughout the film. Yet, you will never bawl your eyes out with laughter like audiences in the 1950s would have done. But that’s ok. Stan & Ollie is not intended to be a comedy, but instead a tribute to the comedies of yore.

It’s not easy adding colour (in both senses) to such a classic black and white act, often described as the biggest comedy duo of all times. Stan & Ollie has an effective colourful vintage feel. It never feels tawdry and cheap. I do, however, have an issue with Hardy’s make-up. Not only was it unnecessary (Reilly would spend on average four hours a day on the make-up chair), but it doesn’t look realistic. Reilly’s Hardy looks like Shrek or the fat guy from Monty Python. Why the insistence in using top-drawer cast? Couldn’t the role be given to someone slightly less famous and with a greater physical resemblance to Oliver Hardy? 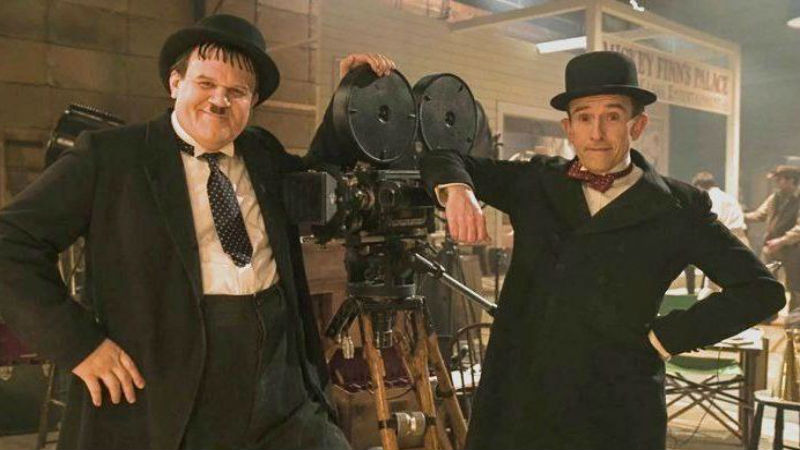 Ultimately, Stan & Ollie is a film about ageing and camaraderie. The greatest testament of the indestructible bond between the two artists is the fact that Stan never performed with anyone else after Hardy became too ill to go on stage, and he continued to write sketches for the duo even after Hardy’s death.

While effective enough, Stan & Ollie also lacks a little spice and wit (aka. the dirty factor). It’s never a chore to sit through, but it’s never riveting, either. The strongest performance is delivered by Nina Arianda as Stan’s Russian wife Ida. She is bitchy, formidable, vaguely doting and also extremely charming. Plus, there are wonderful sights of Britain in the 1950s, including a fully operational Strand tube station. Overall, worth a visit to cinema.

Stan & Ollie is in cinemas across the UK from Friday, January 11th. On VoD Monday, June 3th