"Dirty gem"
Comedy isn't always in colour: doc reveals that the life of stand-up artists and comedians is often fraught with sadness and loneliness - in cinemas Friday

Comedy is a basic part of the human experience. Finding its origins in the works of Aristotle and ancient Greek society, according to theorist William Hazlitt in On Wit and Humour, “the nature of laughter and tears, is to account for the condition of human life; for it is in a manner compounded of these two! It is a tragedy or a comedy — sad or merry, as it happens.”

The new documentary Dying Laughing, co-directed by Lloyd Stanton and Paul Toogood, explores Hazlitt’s profound notion in specific reference to stand-up comedy. Akin to an ensemble of comedic avengers, Stanton and Toogood’s talking heads interviewees include a wealth of American stand-up talent such as Kevin Hart (pictured at the top), Jerry Seinfeld (pictured below), Jerry Lewis, Amy Schumer and Chris Rock. Closer to British waters, icons as Steve Coogan and Billy Connolly are also utilised in order to explore comedians and their obsession towards stand-up comedy. 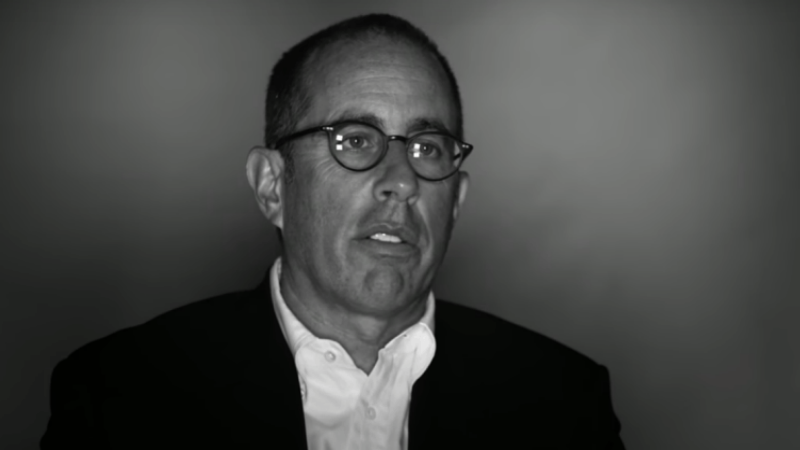 Filmed in monochrome, all the comedians are a juxtaposition to colourful footage of the real world, stand-up stages and audiences laughing. Together, the conversations of Seinfeld et al and Stanton and Toogood’s footage interpolates the viewer into the head becoming a party of this discussion on the essence of stand-up comedy. In this arrangement of interviews and footage, the documentary and its anecdotal nature could have meant a repetition of funny stories from some of the biggest names in comedy.

Stanton and Toogood succeed in creating a documentary with a clear narrative focus on ‘this group of nutters’, as Connolly himself states. The director’s creative decision to film some of the world’s most enigmatic and colourful personalities in black and white underlines the harsh realities of their stories, unlike the colourful reality.

Gripping you into a state of curiosity, initial probing questions such as “Do you remember an early time when things went really well?” establish a base for the documentarians to build upon in terms of drawing out every comedian’s specific response to stand-up and its strange attraction. Continually, inside information is given on the motivations, techniques and focal topics. For any aspiring comedian, consider this film your bible, dictionary and dummies guide. Though you gain the sense that such questions are part of the overall script, they don’t feel repetitive or mundane in the uniqueness of their answers. Probing the comedians to their deepest roots, the film asks such people to scrutinise their own lives and professions – not an easy task for anybody. 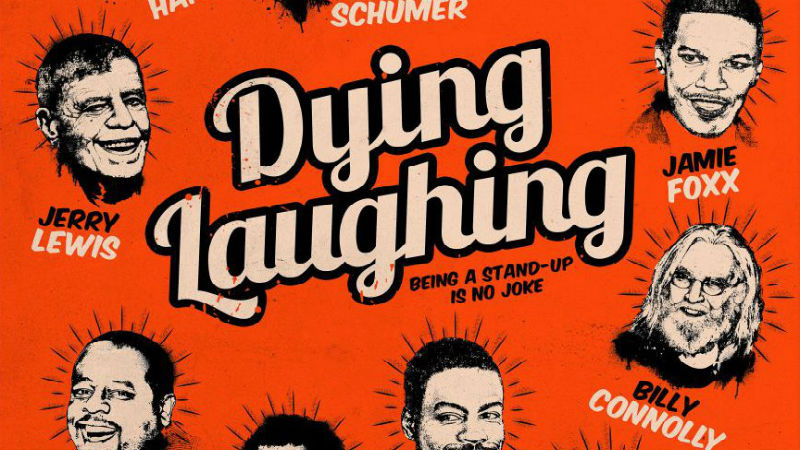 The stillness of interviewing is not normally associated towards cinematic panache or nuance. Yet, in occasionally shooting the interviewee with a wider lens, the filmmakers achieve a tactile sense of the real world. Situated to the left or right of the large blank canvas behind a comedian, their house’s skirting boards or hallways are positioned in the frame. Reiterating their position as human beings, just like the audience, their privileged position in creating laughter for a living is never exalted.

Like William Hazlitt’s theories, Dying Laughing uncovers the fundamental truths of stand-up comedians and their obsessions with performing, regardless of its impact upon their physical or mental state. The loneliness of travelling between difference venues over weeks and months aptly underscores Hazlitt’s “It is a tragedy or a comedy — sad or merry, as it happens.” Nonetheless, asking an audience to have, as Paul Provenza states, “an involuntary physical response… simultaneously – it’s fucking weird” perfectly encapsulates what is so great about stand-up comedy. Instead of reading Hazlitt’s theories on comedy, watch this documentary for a genuine reflection upon this splendidly peculiar set of people and their relationship with stand-up.

Dying Laughing is out in cinemas across the UK on Friday, June 16th.