"Mostly clean movie"
A tale of two kingdoms. As Queen of Scotland in the turbulent 16th century, Mary must contend with her cousin Elizabeth I of England in order to stay alive, in po-faced historical epic - now available on VoD

This 16th century historical epic starts off promisingly enough in England with the imprisoned Queen Mary of Scotland (Saoirse Ronan) being taken out and beheaded. The rest of the film is a flashback covering events leading up to a rerun of this execution scene. Following the death of her 16-year-old royal husband the French Dauphin, 18 year old, Roman Catholic Mary comes to Scotland to rule as Queen surrounded by powerful male advisors, in which respect her position is not dissimilar to that of her Protestant counterpart Queen Elizabeth I (Margot Robbie) South of the border in England.

As Elizabeth is without heir to the English throne and showing no imminent sign of marrying, the English establishment fears Mary may remarry and produce a Catholic, Scottish heir to the Protestant, English throne. In the course of the narrative, Mary survives an ill-judged marriage to English nobleman Henry Stuart/Lord Darnley (Jack Lowden), the odd military uprising and various court intrigues before being captured and imprisoned by the English. 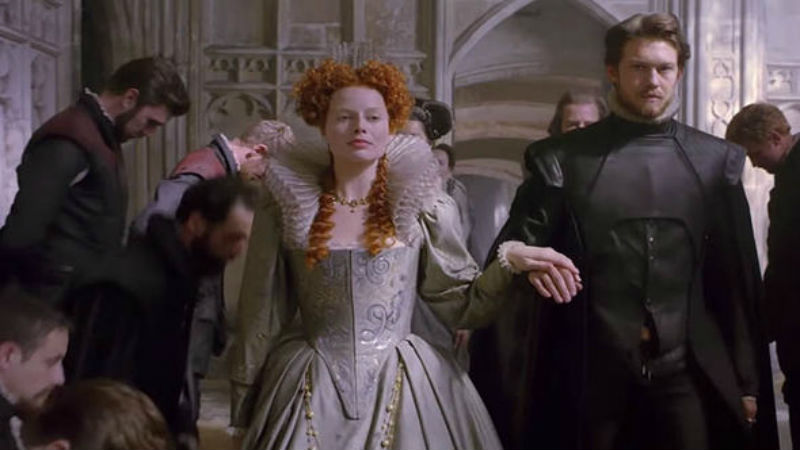 Unlike The Favourite (Yorgos Lanthimos, 2018), which wilfully and gleefully employed the merest bare bones of accepted historical fact as a springboard for compelling flights of fantasy and episodes of sexual intrigue, Mary Queen of Scots is much more po-faced even as it throws in, among other things, a gay affair between Darnley and a cross-dressing member of Mary’s court, an overwrought birthing scene with epic music to match and – moving towards the grimmer end of human behavioural excess – a marital rape scene. It also puts a couple of black actors into Mary’s and Elizabeth’s courts – the reign of Elizabeth I indeed saw Britain’s very first black community, yet there is no indication that they worked at court level.

In real life, the two Queens never actually met but the screenplay can’t resist having them do so – just like in Charles Jarrott’s rather more compelling 1971 version with Glenda Jackson as Elizabeth and Vanessa Redgrave as Mary. The relationship between the two women ruling the two neighbouring countries is however what drives the narrative, whether they actually meet or not. Mary is a creature of the heart, rejecting or accepting suitors for love (including pre-marital cunnilingus performed on her person by the persuasive Darnley) whereas Elizabeth advises admirer Robert Dudley (Joe Alwyn) as he tries to put his hand up her skirts that such things are not going to happen. 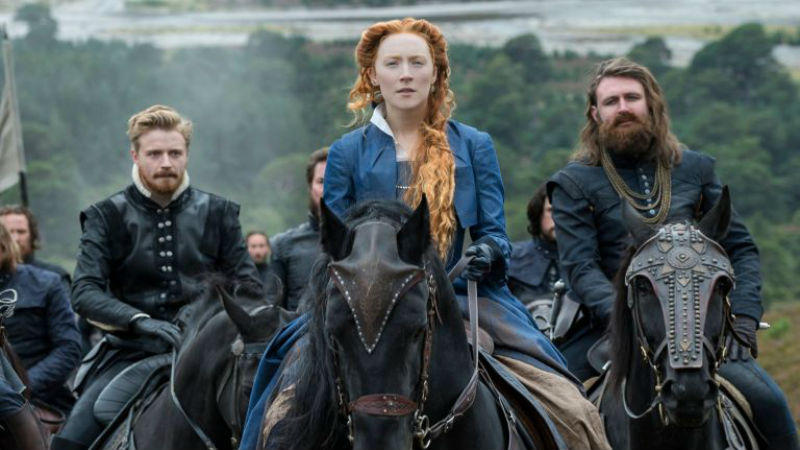 Elizabeth fights off the pox, which briefly threatens her life (and the succession) before coming to a realisation that, in a world of men, she needs to act like a man rather than a woman. To conceal the ravages of the disease after her recovery, the English queen regnant wears white face paint and sports a garish red wig, contrasting sharply with Mary’s unspoiled beauty – although of the two, it’s ultimately Elizabeth who survives. Mary gets far more screen time however.

The plethora of English and Scottish noblemen scarcely help make the convoluted plotting easy to follow while the script’s cramming of a considerable amount of material into its running length means that some promising elements race by without being given the necessary space to be explored, a cramping effect that also hampers the two lead actresses’ performances. That’s a pity, because the characters they play are truly fascinating historical figures who deserve better while the power play between them and the powerful men around each of them is rich material indeed which ought to be exploited much more effectively than it is here.

Mary, Queen of Scots is out in the UK on Friday, January 18th. On VoD on Monday, May 20th.

Robert the Bruce's 14th Century ascendancy to the Scottish throne in the face of despotic English rule is the subject of latest film by the director of Hell or High Water - in cinemas as well as on Netflix from Friday, November 9th [Read More...]