Yorgos Lanthimos's latest film was heavily influenced by Stanley Kubrick's often overlooked masterpiece, which has inspired a number of period dramas in the past 40 years, argues young writer and director Dan Daniel

Asking somebody to pick their favourite Kubrick film is like asking a parent to name their favourite child. The Kubrickian genetic code means you possess a strong affection for all of them but – let’s be honest – there are some films that give you more satisfaction than others. Barry Lyndon (1975) is the neglected child. The one most fans shove aside. In the playground line-up, Barry Lyndon is the thin, bespectacled kid who is only ever chosen when everyone else has already been picked.

Yet, Barry Lyndon‘s legacy is momentous, and not limited to its technical wizardry. Stanley Kubrick’s 1975 film is an epic story, a profound character study and a razor-sharp satire of the British aristocracy. It has influenced many period dramas since. For example, the ornate, Carnivalesque atmosphere of Amadeus (Milos Forman, 1985; pictured below) echoes Barry Lyndon. Katherine (Florence Pugh) of Lady Macbeth (William Oldroyd, 2017) has a predicament very similar to Barry’s, of a social climber entering the aristocracy. Sense and Sensibility (Ang Lee, 1995) shares costume and locations that consistently remind me of the beautiful tableaux of the 1975 film. Martin Scorsese and David Chase (writer of television series The Sopranos) both single it out as a major inspiration. 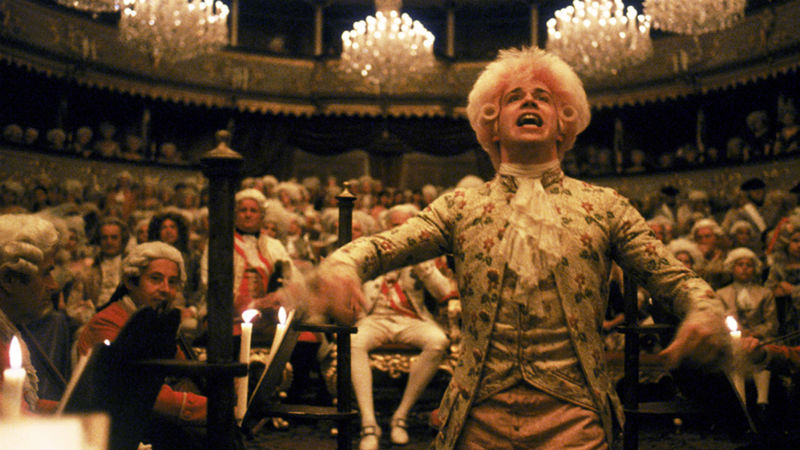 Yorgos Lanthimos, Greek auteur and figurehead of the weird wave of Greek cinema, has made a welcome addition to the list. The Favourite (which is out in cinemas right now) portrays a triadic power struggle in 18th Century England between Queen Anne (Olivia Colman) and sycophantic Abigail and Sarah (Emma Stone and Rachel Weisz, respectively). And it has Barry Lyndon written all over it, at least in my opinion. Even if Lanthimos doesn’t recognise it.

In a short YouTube video, the Greek director talks about some of the films that inspired The Favourite. They include Peter Greenway’s The Draughtman’s Contract (1982), Ingmar Bergman’s Cries and Whispers (1972) and the aforementioned Amadeus. Lanthimos’s omission of Barry Lyndon is blatant and conspicuous. For starters, both films take place in 18th century Britain. But that’s just the tip of the iceberg of similarities. Perhaps Lanthimos wanted to avoid the comparisons because the similarities are so glaring, and he could be branded unoriginal. 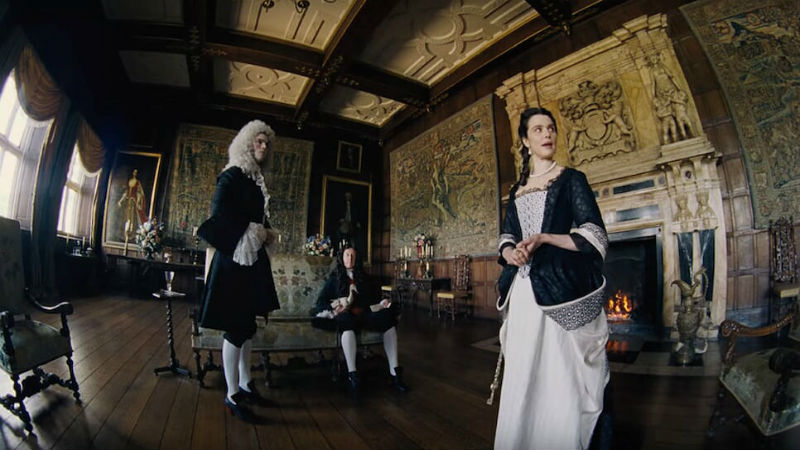 The boldest visual choice in The Favourite is Lanthimos’s liberal use of the fish-eye lens. The film is dotted with warped shots, giving the it a feeling of deformity and eccentricity. One such example is pictured above: Robert Harley (Nicholas Hoult) tries to convince Sarah to grant him an audience with the Queen. The whole sequence has a humorous quality – including a duck in the middle of the table – that counters the sly political manoeuvring.

Barry Lyndon uses similar tricks. The best example is in a fist fight between Barry and a soldier. The camera rests above Barry’s shoulder but remains wide enough to make his opponent look at once imposing and ridiculous. This happens again during Lady Lyndon’s suicide attempt. Her grief-stricken convulsions are disturbing yet there is pitch-black humour to be found in her failing to take enough poison. We watch her flail about frantically, like a fish out of water. When Barry’s father is killed in a duel, the death is so distant that it’s almost insignificant. Kubrick starts small, and zooms out until the subject becomes a little detail on the silver screen (pictured below). 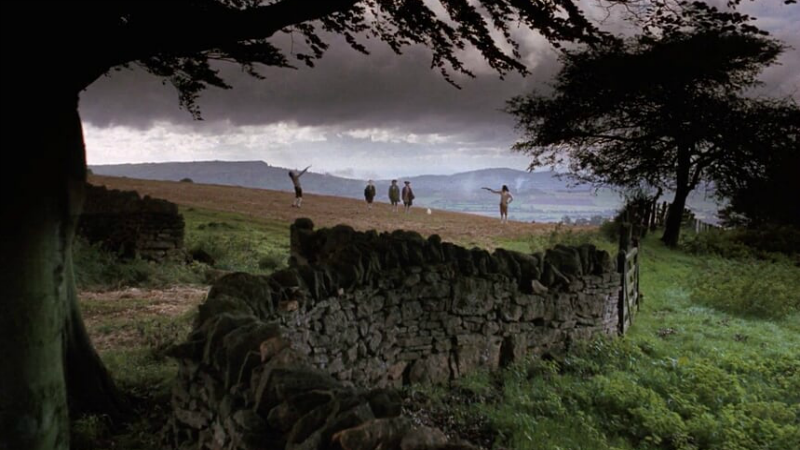 Both The Favourite and Barry Lyndon are brimming with comedic elements, with ample opportunities to mock aristocratic rituals and sense of grandeur. In Barry Lyndon, John Quin makes faces to the camera as he marches. In The Favourite, Abigail (Stone) dances with her soon-to-be lover (pictured above). Both sequences are so absurd they border on parody.

Kubrick often mocks the perceived sense of superiority of the British aristocracy by placing people in the background, standing gallantly despite being completely redundant to the action. Lanthimos peppers his film with bizarre events such as duck racing and oranges being thrown at a naked, obese man. Both directors seek to criticise the aristocracy by parodying their inflated sense of self-righteousness. And both are equally successful. 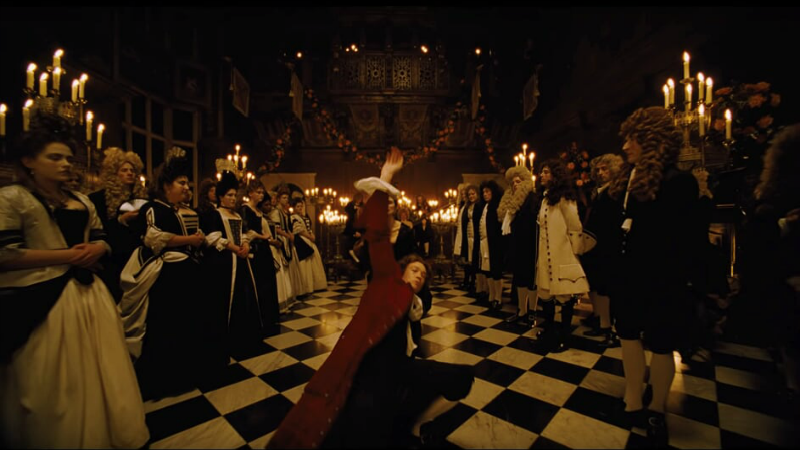 Perhaps more significantly, both films portray “common opportunists” who use their charms and wit in order to climb to the top of the aristocracy.

Both Barry and Abigail (pictured above) are underdogs in the beginning of the movies. Both of their fathers perished in a freak incident and both of them have our sympathy. Both have a large potential to cause harm and gradually lose our allegiance as they climb up the social ladder. Sarah’s eventual demise mirrors Barry. And they both meet a hapless ending.

Despite the Kubrickian influences, The Favourite remains a very original film. It adds new twists and flavours to many of the techniques Kubrick created, and the outcome is something entirely novel.

Whining and wailing are futile! The Greek director of Dogtooth and The Lobster returns with an unforgiving tale of sacrifice, with his usual absurdist streak - finally in cinemas! [Read More...]