"Mostly clean movie"
British public school spin on Cyrano de Bergerac features a dazzling Alex Lawther as the school runt, yet it fails some of the rules of a good farce - now available on VoD

Who is this desperate young man with a look of anguish on his face, wearing a head-shaped hat with loose straps, rather like the ones victims of the Holocaust wore when the concentration camps were liberated, combined with a stripy top rather like those of the same camps, wading up a river? Is he fleeing from Auschwitz before the guards catch up? No, he is actually a boy at a British public school, participating in an idiotic game called “Streamers” (obviously modelled on the Eton Wall Game), which involves wading up and down a river and spending the afternoon being crushed against a wall. He is not about to become another statistic of the Holocaust. Instead, he is in danger of ruining the game for his school, which according to its macho ethos is probably worse than getting caught up in the Holocaust – hence the look of anguish.

Caldermount is the dreadful school in question (motto: “Viriliter Age” – “Act Like a Man”) and the poor boy is Amberson (Alex Lawther), the school runt, much put upon because he is a scholarship boy (and therefore not quite upper class). Caldermount is a mad, uber-macho establishment, where the boys are expected to stand up and rumble their feet in the chapel when the founder of the school’s name is mentioned. Pathetic boys like Amberson get their heads stuck down the lavatory. None of the boys or staff have any sensitivity. 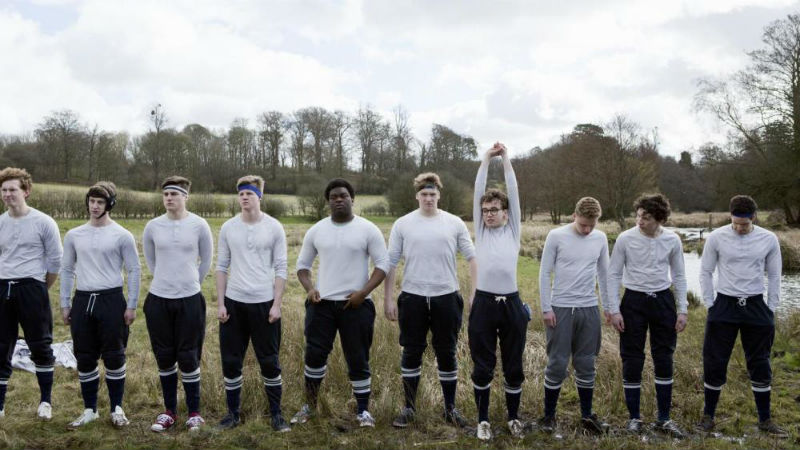 Poor Amberson has got to try to survive all this and is forced to go on something called the “bucket run”, where he is woken up in bed by having a bucket of water thrown over him, has to jump out of bed in his pyjamas, run all over the countryside still in his pyjamas and refill the bucket and bring it home again. During one of these exercises he falls down in a farm yard and encounters a mysterious young French woman who lives with her father in the farm house. Her father is Monsieur Babinot (Denis Menochet). The French teacher at Caldermount imagines himself to be a French intellectual, and he is impossible to live with. His daughter Agnes (Pauline Etienne) is the femme fatale figure, or perhaps the Roxane character (the film is a retelling of Edmond Rostand’s play Cyrano de Bergerac). Agnes does a little bit of cruising in the school grounds, sailing mysteriously past the class windows and espies the gorgeous Winchester (Jonah Hauer-King), who is entirely devoid of emotional intelligence.

She commissions Amberson to deliver a videotape (this is the 1980s) to Winchester in order to to tell him how much she is interested in him. Agnes is all arty and intellectual and the tape totally stumps Winchester. Amberson, who is emotional intelligence on two legs, helps Winchester to make equally pretentious tapes. She falls in love with Winchester through the good offices of Amberson. So far, so very Cyrano de Bergerac and this is where my plot and spoiler information should come to an end.

This film sets out to be an enjoyable farce, yet it fails the rules of good farce. Farce (think of Fawlty Towers and Feydeau) thrives on situations and characters that are recognisably true and yet exaggerated. The exaggerations of the characters bump into one another and the hilarity and farcical situations are produced. Old Boys abounds in stereotypes and yet it is so exaggerated that the credibility that sustains farce is lost. There stereotypes include the mad English, the arty farty, sexy French, manic schoolteachers, and so on. Basil Fawlty is a recognisable sort of neurotic Englishman, Feydeau is based on old-fashioned adultery. Everyone in “Old Boys” is so mad that farce is replaced by the merely frantic. Only Mr. Huggins (Joshua McGuire) is a recognisably desperate teacher. 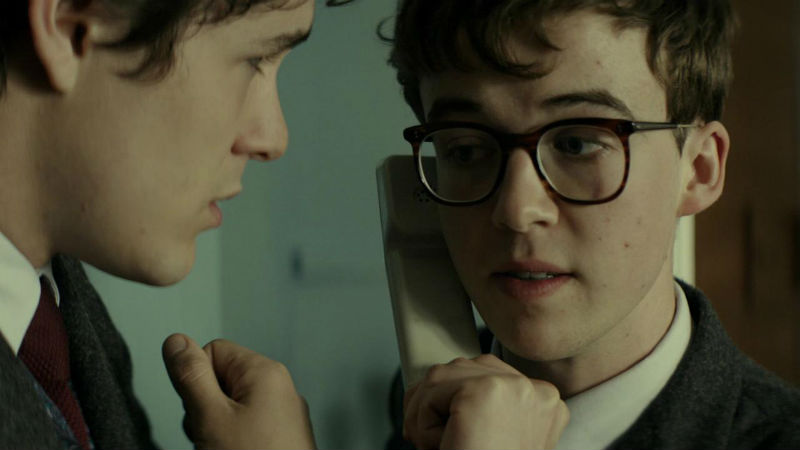 Winchester is so emotionally challenged that, when he does get into Agnes’s bedroom, he has to be prompted to hold hands and kiss her. Even Agnes is a bit strange. Does she really think that the man who sends her fascinating videos is the same man who has to be prompted to kiss her? One is left wondering about Amberson as well. Where did this willowy teenager, who seems so decent and virginal, gain all his knowledge about the females? He even knows the advice to “treat ‘em a bit rough”, which he passes on to Winchester when she sends him a cake.

The Cyrano de Bergerac story is time honoured and popular because it is about a permanent human dilemma. How does honest and heartfelt love match with the dictates of attraction and human status? Cyrano de Bergerac is a good man. He helps out a friend with wooing a beautiful and fascinating woman, whom he also loves, and in the process sacrifices himself. The problem is his dreadful nose. Quasimodo loves Esmeralda, yet he is misshapen and very ugly. Watch Charles Laughton in the Hunchback of Notre Dame (Gary Trousdale/ Kirk Wise, 1939) declare his love and I challenge you not to be very moved. Amberson is not ugly yet he looks like jailbait. Lawther is in reality 23 years of age, but keeps getting teeny roles, a bit like Leonardo de Caprio in his early days.

Alex Lawther is a seriously talented actor. You only have to look at him as he sees Agnes for the first time to know that he can deliver the goods in sensitivity and depth. He has to carry the weight of a film which does not really match his talents. I felt this was also the case in British television show The End of the F**king World, where he just wanders around looking like a teenage waif and certainly not an imaginary psychopath. It’s time he rang up the RSC. I am sure they can give him something to do.