"Greasy movie"
A thousand shades of grey. Four friends take a barge holiday on the canals of Southern England, captured in glorious black and white cinematography - in cinemas from Friday, December 7th

This is one of those films that barely has a narrative (it does have one, but it’s very slender). That’s often a recipe for disaster, but not so in this case. The story, such as it is, is this: a group of four fortysomething friends rent a barge for three days’ holiday on the waterways of Southern England.

From its opening where he sits on the side of a canal staring at images on his mobile phone, Jon (Jon Foster) is struggling to cope with personal loss. He and Zooby (Jamie Zubairi) sign the barge hire contract, go through the basics of safety and cancel rules and regulations, stock up with supplies of booze and food then pick up Red (Robyn Isaac) who can only stay one night as she must attend a wedding. Later, they are joined by Simon (Simon Meacock). 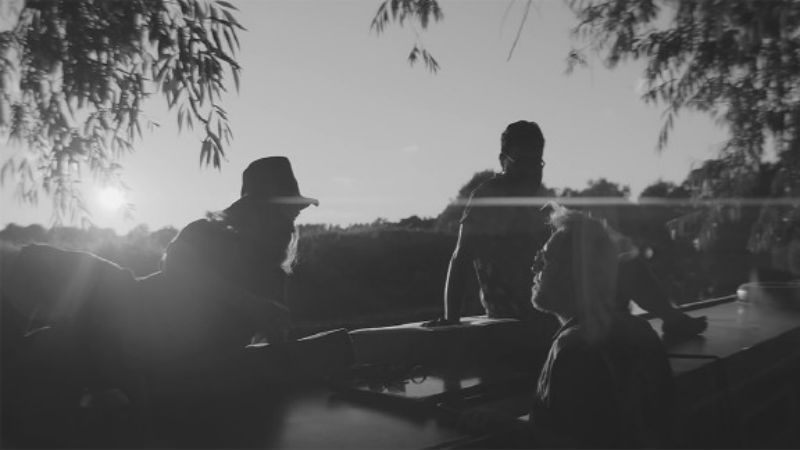 The weather is good and the four (or three, after Red leaves just over an hour in to the 90-odd minute running length) traverse canals, visit pubs, hang out both inside and outside the barge, consume copious amounts of alcohol and other substances and generally chill out with one another, take it easy and have an enjoyable, relaxing time.

Although Felber scripted the whole thing, the helmer got his cast to improvise heavily over the one weekend shoot and the results feel very natural, like you’re watching a bunch of mates spending time together rather than actors acting (although, to be fair, at least some of the characters are scripted as actors). And his pre-scripting has locked down what each of the four characters is about, so that when the cast come to improvise, they know what has to underpin whatever they do. An editor himself with considerable experience in 90 second commercials and the occasional documentary, Felber edited the thing down from a mammoth 15 hours and somewhere in the course of that process has arrived at this remarkable and beautifully paced little movie.

It’s helped no end by superb black and white cinematography by seasoned cameraman Paul O’Callaghan. Actually, black and white isn’t the most appropriate phrase to describe Tides. There is no real deep, dark black. Instead, you will see an incredible range of greys and white, dark greys, light greys and everything in between. Many of the film’s best moments (and there are lots of them) are perfectly captured by his eye… two people talking on deck at night outside a lighted cabin interior, their darkened faces outlined by wisps of backlight… the sudden ducking for an oncoming low bridge… numerous moving boat point of view vistas travelling along waterways between trees on either side. 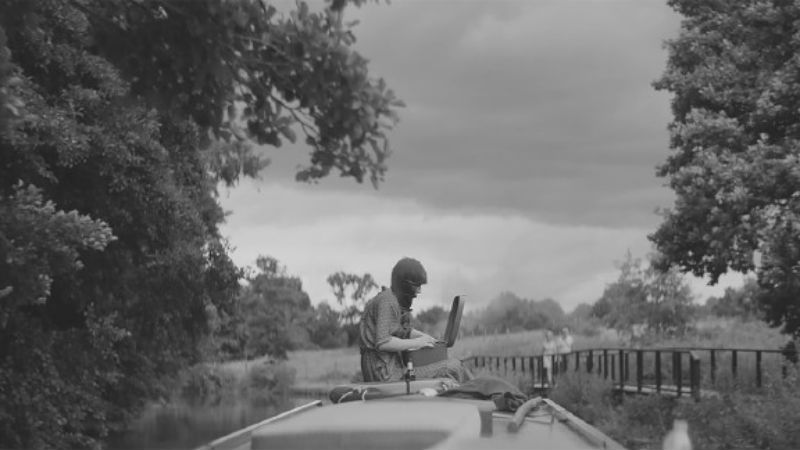 The results are very different from (and looser than) this year’s earlier, equally impressive Anchor And Hope (Carlos Marques-Marcet) making you wonder if there’s room for a whole new subgenre of independent UK/Irish canal movies because not only are both films terrific and very, very different, but also suggest there are an awful lot more stories to be told and feelings to be conveyed in the milieu of barges and canals. Both feel like they’ve been made by people just getting out there, not worrying about the rules and simply making movies on a wing and a prayer. Both have a freshness to them, so if a ‘canal’ subgenre does emerge it bodes well for independent British and Irish film. Barges and canals can clearly deliver high production values at minimal cost using a wonderful British/Irish natural resource we never realised we possessed. For the time being, though, Tides will do very nicely. Like its subject matter, the film is cool and refreshing. Something of a gem.

Tides is out in the UK on Friday, December 7th, and then on VoD on Monday, December 10th. Watch the film trailer below:

A Love That Never Dies

How can I go on without you? Documentary made by grief-stricken parents after the tragic and untimely death of their 18-year-old son deals with pain and modern ways of keeping someone's memory alive - available to watch online for free between January 11th to the 16th [Read More...]

December is the month of European cinema!

ArteKino is back with a selection of 10 dirty gems from every corner of Europe available until December 31st, and it's entirely free to watch! [Read More...]