"Dirty gem"
Screen adaptation of 1960 autobiographical novel by Romain Gary follows the Lithuanian-born French-writer as he flees Nazism and engages in the French Air Force, with a dazzling Charlotte Gainsbourg as his mother - from the Jewish Film Festival

There is a maxim that says: “Never let the truth get in the way of a good story”. It applies very neatly to this highly personal novel, written by of France’s greatest writers Roman Gary. He’s also the sole writer to have won the Goncourt Prize for French literature twice. The romantic retelling of his life story translates extremely well into film. The film details his youth in Lithuania, his move with his family to the south of France in order to escape the imminent threat of Nazism, as well as his career in the French Air Force.

The name of his mother is changed from Mina to Nina and fact is embellished to emphasise the central love story between a mother and son. Director Eric Barbier brings the essence of this story to life with an extended flashback after Roman (Pierre Niney) grudgingly allows his current partner Lesley Blanch (Catherine McCormack) to read his latest manuscript. Each scene is deftly shot by Glynn Speeckaert, who rises to the challenge of the broad historical canvas required by the time period. A particular mention must go to Pierre Renson and the Art Department in taking us to places from Polish run down apartment buildings to war torn Europe and pre-war Riviera glamour with us never once doubting that this is where we are. 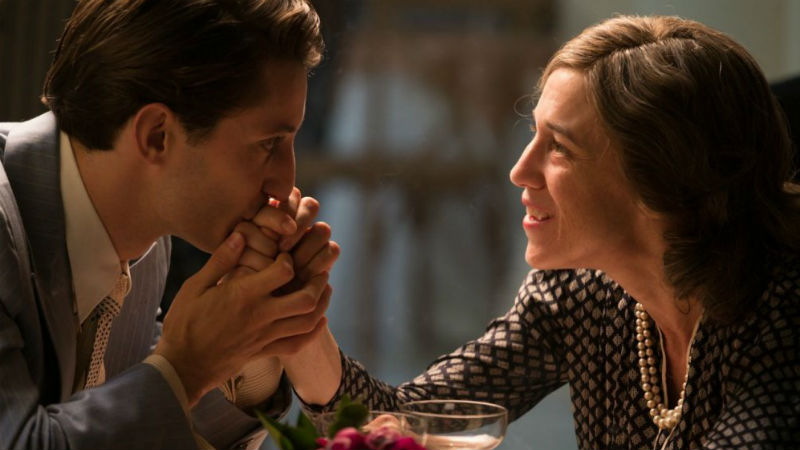 Roman at each stage of his life is compellingly brought to life by Pawel Puchalski, Nemo Schiffman and Pierre Niney. Each of the actors so embody this boy, adolescent and man that we barely notice the change of portrayal. One of these transitions seamlessly takes place during a swim in the Mediterranean when mother and son realise their dream of moving to France.

Roman’s mother Nina Kacew (Charlotte Gainsbourg) drives the action of the story with her inflated and sometimes unrealistic ambitions for her son. The young boy is told “I want you to be famous while you are alive” and demands from him a loyalty and commitment to her various ‘get famous by any means’ schemes. Her imagination and talent for poetic deception come into their own each time the pair are thwarted by anti-Semitism or poverty.

It is a joy to see Gainsbourg in a role that does not require her to be a beauty. Nina’s beauty comes from within and is enough to carry both herself and her son through any barriers set against them. Lack of vanity for an actor is a powerful tool that enables the viewer to see deeply into the soul of a character and the cost to them of the choices they make. We see Nina basically bullying her son to comply with her will, we see her down and out, lying, desperately ill and also her fierce and consuming love for her only offspring. Her chameleon ability to change profession and use her earlier acting experience to convince an antique dealer that she has Romanov treasures is a glorious example of this. Didier Bourdon playing Alex Gubernatis gives a wonderful ‘turn’ pretending to be a famous fashion designer to enable Nina to wreak revenge on her prejudiced neighbours in Poland. 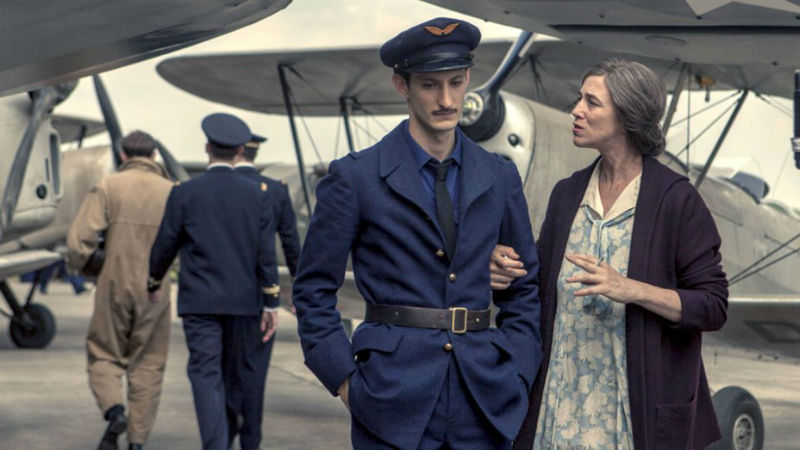 At times his mother’s ambitions weigh heavily on Roman and he finds himself hating his mother as she pays a visit to his regiment and embarrasses him in front of the other men. Every decision he takes is a step to realising Nina’s need for him to attain glory in war and fame as a writer. He declares at one point: “No one should be allowed to love anyone this much, not even your mother”. However the impetus he receives from her enables him to keep moving forward. When he is denied an officer’s commission purely on the grounds of being Jewish, his mother’s need to celebrate his achievements gives him the energy to fly to England and join De Gaulle’s “free French” fight against the Nazi’s.

While engaging in missions for his squadron, he deprives himself of sleep, driving to finish the novel A European Education. He is able to return to Nice as a recognised author and a war hero, having successfully guided his blinded pilot back to the runway after a mission. The power of the connection between mother and son is explored in every way in this film. His optimism when he hopes his mother may find a husband and give him the sexual freedom he craves. His frustration with her schemes and inflexible strictures. Her love for him that proves to be stronger than death itself. We are left wondering whether Gary would have become a writer were it not for his formidable parent, but also questioning what gaining plaudits of this kind gave him as, in reality Roman took his own life with gun a in 1980.

Promise at Dawn shows at the UK Jewish Film Festival taking place this November. Expect no less than a feast for your eyes.

Three triplets, separated at birth from one another are rekindled to find each other, just as they find out more about one another and about themselves - now available on Netflix [Read More...]