"Dirty gem"
No independent thought. Consume. Do not question authority. But who are the people sending these messages and what do they want? - John Carpenter's often overlooked dirty gem is in cinemas from Friday, October 26th

It’s by no means consistent, but when They Live is dirty it’s very dirty. John Carpenter is known for horror fare like Prince Of Darkness (1987), The Fog (1980) and Escape From New York (1981) – all three of which are also about to be rereleased in cinemas. They skilfully build atmosphere and tension to a climax to the accompaniment of creepy, rhythmic music co-composed by Carpenter himself. So admired are his scores that in recent years he’s been able to reinvent himself as a musician doing albums and tours.

The score in They Live plays a particularly important role building from a slow, repetitive blues riff. Blues was originally the musical vehicle African Americans used in order to express their woes in a country where white men were privileged masters and blacks decidedly second class citizens.

Carpenter doesn’t quite go as far as to have his main protagonist as a black person (his protagonist and sidekick are men not women). Instead, Carpenter builds a decidedly stratified social image of the US with haves, have-nots and a privileged financial elite using dirty tricks to maintain their position at the top of the heap.

The film was made towards the end of Ronald Reagan’s second term, the beginning of the whole neo-liberal era in which money was consistently channeled from the poor to the rich. In retrospect, it’s amazing Carpenter got away with as much as he did here – possibly because on the one hand this was a small, independent production rather than a big Studio one and on the other Carpenter was known for directing horror and sci-fi and since this fell within those categories no-one took it seriously. 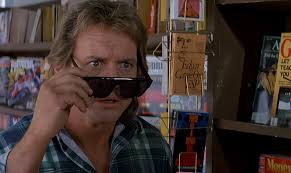 A drifter Nada (pro-wrestling star Roddy Piper) is part of an underclass travelling the US in search of work. Arriving in a city and finding employment on a building site he meets Frank (Keith David) who directs him to a camp where people can find immediate food and shelter. Gilbert (Peter Jason), who runs the camp, periodically disappears into the Free Episcopal Church nearby and Nada follows him out of curiosity. He discovers that the church, where services are actually tape recordings played through a sound system, is a cover for a resistance organisation who interrupt broadcast television with messages about a small group keeping the rest of humanity in submission. The authorities worry about these people enough to raid the premises. Following one raid, Nada finds a box of sunglasses.

Wearing these sunglasses in the street proves a revelation. Suddenly the world is black and white. Billboards advertising consumer goods of holidays abroad are reduced to simple black print on a white background comprising capitalised slogans like “Obey” and “Marry and reproduce” – instructions to submit to the prevailing order. Street signs become “No independent thought”, “Consume” and “Do not question authority”. The advertising and mass media are pushing out subliminal messages designed to keep the population submissive. This has rarely been portrayed so effectively either in the movies or anywhere else.

More surprises still are to come from the glasses when they also reveal that not all humans are, in fact, human. Some appear an entirely different species whose heads look more like skulls with muscle attached. They are the ruling elite and they’re different from us – aliens, perhaps, or beings from another dimension. If ever you wanted to see an image of the financial elite behaving like a privileged race apart, look no further. The film is less concerned with what type of creature they might be and more with what they might be up to.

For the remainder of its running length, They Live veers off into action territory with a ridiculously long if highly entertaining back alley punch-up between Nada and Frank when the former tries to get the latter to put on the sunglasses… i.e. to see through his eyes. This is followed by a daring raid on the TV station broadcasting the signal that both makes the elite appear like ordinary people and brainwashes the audience. Like the hilarious sexual sight gag on which it closes, They Live’s second half is ultimately disposable although enjoyable enough while you’re watching it. And being a John Carpenter film, it has a driving score to move it along nicely.

The whole could do with a greater share of female characters (Meg Foster plays a TV executive as unmistakable third fiddle to the two men) and being a 1988 production there’s a complete lack of mobile phones which give a distinct period feel today. Even so, the sociopolitical images will stick with you, as powerful now as when Carpenter shot them, the rich and powerful making everybody else conform, the glasses providing the wherewithal to see through their deception and manipulation.

Neo-liberalism has been the dominant political model in the world in the 40 years since Thatcher and Reagan although there are definite signs that all that may be about to change (Sanders, Trump, Corbyn, Brexit). In the intervening years, They Live has had its finger on this particular pulse like no other movie this writer can think of – and has lost none of its power to shock and unsettle. To find it back on the big screen is an unexpected, dirty political treat. The other three reissued Carpenter movies are welcome too, but this particular one is really special.

Watch the trailer for the 4K restorations here:

And here’s the They Live trailer from 1988, recut:

A Citizen Of Nowhere? A Transnistrian national (a self-proclaimed country no other nation recognises) travels between various Eastern Bloc countries and talks about national identity with the people he meets on the journey, on hypnotic black and white film – in cinemas from Friday 20th July [Read More...]