"Dirty gem"
A Citizen Of Nowhere? A Transnistrian national (a self-proclaimed country no other nation recognises) travels between various Eastern Bloc countries and talks about national identity with the people he meets on the journey, on hypnotic black and white film – in cinemas from Friday 20th July

Conversations. In Russian. At border checkpoints between countries in the former Soviet Union. And at places in between. Monuments, striking architecture. Much less arresting locations, too. Some of these conversations are accompanied by black and white footage. Very occasionally, someone’s lips move and you see and hear them speaking at the same time, but most of the time, you don’t. Other conversations are accompanied by blank, dark blue footage, nothing but the uniform colour on the screen (unless you count the white, English language subtitles), just people talking on the soundtrack. Monologues discussing various aspects of modern, Russian history and the ethnic diversity of the countries bordering it also appear on the soundtrack along with unsettling music ranging from avantgarde orchestral to drone.

Kolja comes from Transnistria, formerly part of the Moldavian Socialist Soviet Republic (now a self-proclaimed republic, not recognised by any other countries). He has a passport, so he’s travelling, the interpreter on a film crew making a film about Russia and borders and ethnicity. It might be this film or it might be a film we never see. For much of the time we see him driving to or from Eastern Bloc border checkpoints or being questioned by officials in rooms about his nationality and loyalty. Although it clearly has its own identity, with which he identifies, Transnistria doesn’t appear to be recognised by any other country. 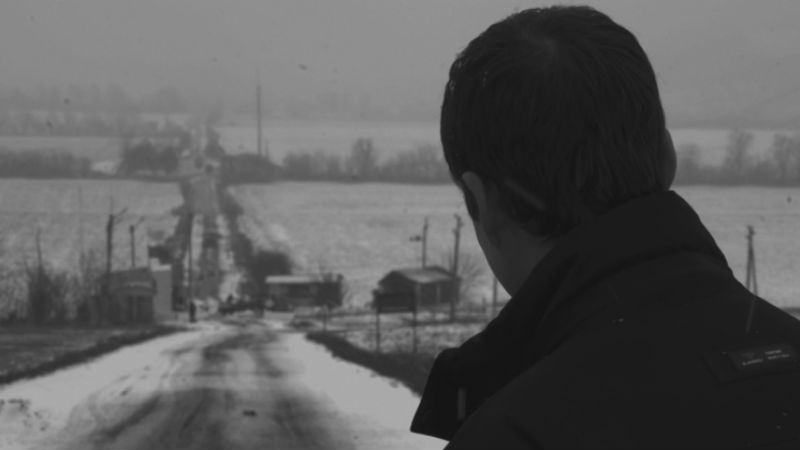 As Kolja crosses over and waits in between a seemingly endless series of borders between one country and another – actually five in number – the very idea of nationality, of separate nation states, seems to diminish in significance to the point of evaporation into thin air. Although when at one point he dismisses the suggestion that he might want to live in the EU, you can see him complying with the idea of borders inside his head. A citizen of nowhere? A citizen of somewhere?

In places shots are held for some considerable length of time, whether it’s the opening shot of Kolja’s face against a background of white walls in a waiting room somewhere as we hear him questioned at length by border official on the soundtrack or a passenger seat shot of him driving through nondescript territory.

Much of the time, nothing really happens. It’s a lot like the effect of 2001, watching someone perform mundane tasks or, more often here, wait around for officials to perform their functions so the people in question can move on. As I wrote of Kubrick’s SF outing on its recent reissue, there’s something quite hypnotic about the mundane. If anything, that effect is even stronger here – the vivid black and white images lend an almost dreamlike quality to the whole thing and there are no dramas to suddenly leap out of the humdrum. 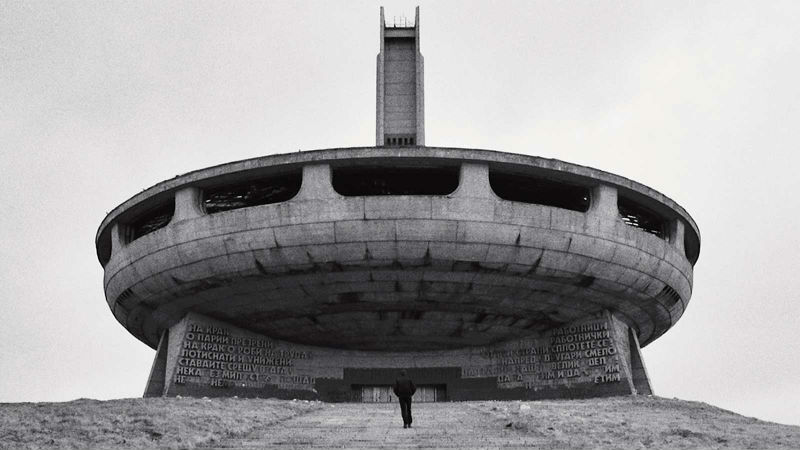 It’s barely even a narrative, more like a very strange and empty yet somehow unforgettable surreality, memorable as much for the places in which events (don’t) occur as it is for the things people say and the ideas that float around within their words. At their most focused and extreme, the content of those words explore incidences of genocide under Stalin.

Anyone looking for cinematic equivalents might recognise the feeling of the languorous waking dream from Tarkovsky narratives (Ivan’s Childhood/1962, Stalker/1979) or the bleak architectural images and mom-synchronised voice over of early, pre-feature film Cronenberg (Stereo/1969, Crimes Of The Future/1970). But again, both these examples look positively action-packed by comparison with Extinction – a film which might, just might, be destined for cult status.

Nation states seemingly have mechanisms to exert control over people, but in the end that really doesn’t matter in vision of the female Portuguese filmmaker Salomé Lamas: no matter how much states try to confine those who reside in or pass through them, people and their words, thoughts and consciousness potentially transcend all that.

Extinction is out in the UK on Friday, July 20th. Watch the film trailer below: