"Filthy genius movie"
Acquitted by mirrors! Rereleased two thirds of a century on, Cocteau's reimagining of the Greek legend of Orpheus remains as dirtyliciously magical as ever - in cinemas from Friday, 19th

Jean Cocteau (1889-1963) was a self-styled ‘poet’, a versatile, avant-garde French artist who worked across a number of different media – novels, visual art, design, theatre, cinema as well as poetry. 1950’s Orphée is one of his most celebrated films. And rightly so.

Famed poet Orphée (Jean Marais) is going through a bad creative patch when newcomer rival Cégeste (Edouard Dermithe) is killed by two speeding, leather-clad motorcycle riders. Orphée becomes obsessed with messages transmitted over the radio of the car belonging to Cégeste’s patron the Princess (Maria Casarès) which seem to him better than any lines he’s written recently.

So obsessed with these broadcasts does Orphée become that he fails to pay enough attention to his wife Eurydice (Marie Déa) who becomes increasingly restless. Every night as he sleeps, the Princess – who a voiceover (read by Jean Cocteau himself) informs us is actually Orphée’s death – visits his room through his wardrobe mirror to watch over him. When Eurydice dies following her too being hit by the motorcyclists, Orphée must venture through the mirror and across the Zone to get her back from the underworld. But once there, he’s confronted by a panel of men judging the Princess for trying to seduce him into going there… 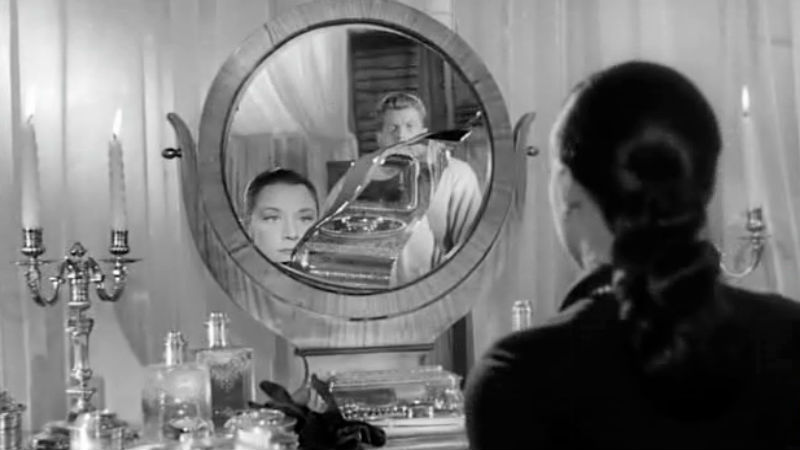 It’s a fairly basic production by today’s standards. The director’s understanding of the mythology are profoundly inventive. Cocteau’s ideas easily transcend not only its budgetary limitations but also the contemporary 1950 French café society setting in which it was made. As well as the motorcycling Angels of Death, some of the amazing visuals include running the camera backwards so that, for example, dead people are resurrected for their journey into the underworld by reverse falling from horizontal on a bed to an upright standing position. People travel through the surface of mirrors, with one extraordinary close up image created by rubber-gloved hands being plunged into a vat of mercury, a special effect that would probably not be allowed today for health and safety reasons. And in the Zone, Orphée and the Princess’ chauffeur Heurtebise (François Périer) pull themselves along walls as if climbing or are sucked past them as if towards a vacuum.

Orphée is an extraordinary special effects fest, underpinned by Cocteau’s poetic sensibility, storytelling ability and visual flair. There’s no obvious reason why such seemingly extraneous material of radio messages such as “a glass of water illuminates the world” should make such an impression on both Orphée and us, but they do. Once we realise that not only is the Princess in love with Orphée but Heurtebise has fallen for Eurydice, we sympathise with each of them in their various plights as well. Plus, the film is packed with incredible images that, once seen, aren’t easily expunged from your head.

It doesn’t hurt that Cocteau knows how to cast actors who are visually striking in addition to giving compelling performances. Leading man Jean Marais is just as memorable in Orphée as he is in full beast make-up in the director’s earlier Beauty And The Beast (1946) while Maria Casarès is both elegant and enigmatic as Death.

You could beef up the effects by spending more money – but Cocteau’s inventiveness with the minimal resources available to him remains more impressive than most if not all contemporary megabudget movies. In the cinema of magic, mythmaking and enchantment Cocteau has no equal and has left a lasting imprint on film cuture. You can see Orphée‘s influence in works as diverse as Vertigo (Alfred Hitchcock, 1958) and Eraserhead (David Lynch, 1977). Orphée’s pursuit of the Princess who vanishes into thin air in a colonnade anticipates the sequence in Vertigo where the pursued woman vanishes into thin air in the McKittrick Hotel, not to mention the setting of a colonnade at the Spanish Mission later on. And the dogtooth pattern on Orphée’s bedroom floor prefigures the one in the protagonist’s dream in Eraserhead, not to mention the room where the dwarf appears in Lynch’s later TV series Twin Peaks (1990-91). 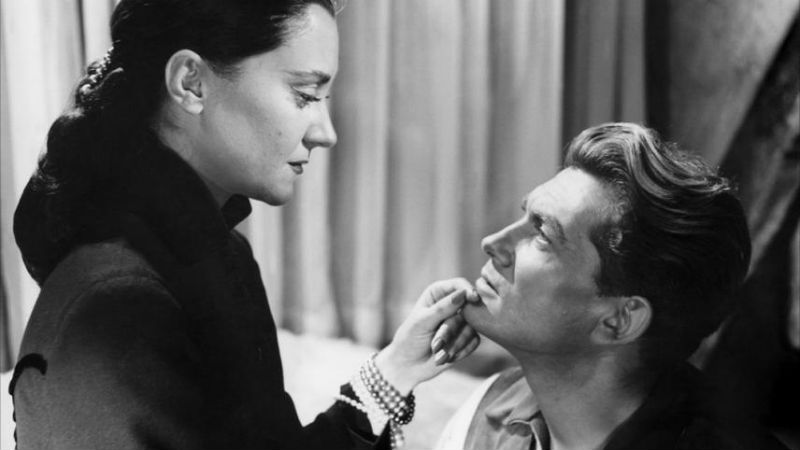 Society has changed a lot since the 1950s. You might think the relationships in the film would benefit from being more explicit, but somehow the lack of bodily flesh on display here adds to the film’s charm: why be explicit when you can do it all with subtle hints and suggestion? The one area where the film might be made differently today is in its portrayal of women. If the strong willed Princess is impressive enough, Eurydice does little beyond pine for her husband and desire to make him happy. Also, the committee that sits in judgement on the Princess consists entirely of men, whereas today one would include both sexes. And although Cocteau himself was openly homosexual (no-one used the word ‘gay’ in his lifetime), there are no LGBT characters as such here. Perhaps in today’s more open society he’d have realised his characters slightly differently.

Nevertheless, there’s really nothing else in cinema quite like Orphée just as there’s really no-one else in the wider world of the arts quite like Jean Cocteau. Orphée is just as dazzling today as it was when first released two thirds of a century ago. The BFI’s new 2K restoration of this classic in cinemas provides the perfect opportunity either to revisit it for the umpteenth time or to view it for the very first.

Orphée is out in the UK on Friday, October 19th. Watch the BFI’s brand new film trailer below:

It’s also showing as part of Fantastique: The Dream Worlds of French Cinema

at BFI Southbank from Tuesday, October 23rd to the end of November

and a Jean Cocteau retrospective at the Institut français

The Eyes Of Orson Welles

Pawn, Knight, King, Jester. A spoken letter to the great director in which Welles’ own, hitherto unseen drawings and paintings provide a radical new entry point into his life and art - previews with director Q&A from Sunday August 12th, in cinemas Friday, August 17th [Read More...]