"Filthy genius movie"
Uppers and downers – either way blood flows. Arthouse enfant terrible Noé combines technical skill and singular focus with some of the most spectacular dancing ever put on film to produce a dark and challenging vision of hell on earth - now available on VoD

Cinema at its purest. Bright white on a screen. A woman starts crawling from the top of the screen. Extreme audience disorientation. We realise she’s crawling through snow. She appears to be in a bad way. Traces of blood. The camera follows her forward movement down the screen. Slowly a tree comes into shot from the bottom. We are watching the same overhead camera movement.

A series of vox pops on a television screen with shelves of books on one side and piles of DVDs on the other. Dancers answer questions on why dance is important to them. Would they do anything in order to make it big? What would they do if they weren’t able to dance?

Then the narrative proper begins. It’s 1996. We’re inside a building with a dancefloor watching the most amazing dance routines we’ve ever seen. It’s the final rehearsal for a dance show. After which the dancers will let their hair down in a party with a DJ. Unaware that someone has spiked the punch. The party will turn into bad trip and an in-your-face vision of hell on earth. 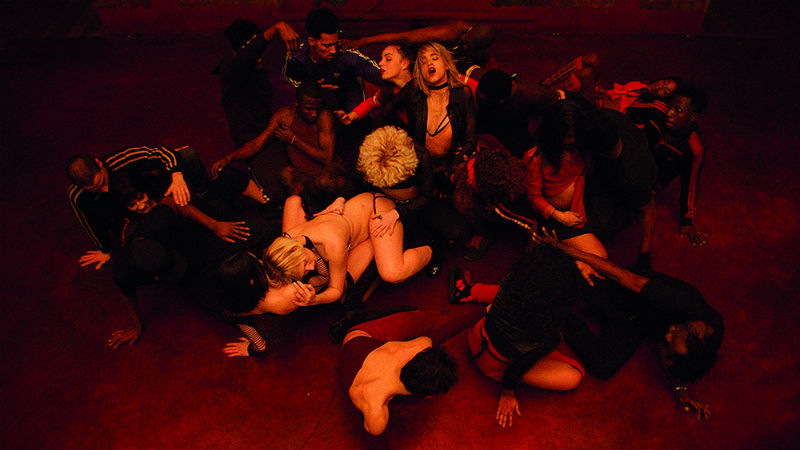 Welcome to the extreme and confrontational cinema of Gaspar Noé (Irreversible, 2002; Enter The Void, 2009). He likes, say the press notes, to set up situations of anarchy and chaos and then commit them to film. Which sounds like a recipe for tedium – and might well be so in lesser hands – but Noé possesses an incredible eye and cinematic aesthetic and what he puts on the screen is never less than extraordinary.

He is equally adept at showing a deeply distressing scene in which men talk about potential sexual conquests among the women nearby or a compelling episode wherein one woman admits to another that she’s pregnant with no idea as to the identity of the father. If such scenes play on our prejudices and probe our sympathies for different characters, they slowly give way to something much more supercharged and kinetic even as they invest us emotionally in what we’re about to watch.

As Noé’s camera follows characters around the dance studio floor and the various rooms adjoining it, including a power supply room with high voltage equipment and ‘Danger Of Death’ notices on the door, he uses the full arsenal of cinematic tricks at his disposal. The camera rolls on its own axis so that sometimes, down is up, up as down and the floor is the ceiling. As the party gets increasingly out of hand, and a couple of performers decide to have sex in the background (that’s real sex, by the way, not the simulated for the cameras variety), the disorientated viewer is vaguely aware of them doing so on the floor in a top corner of the upside-down image above him or her.

There’s an intense physicality throughout running a whole gauntlet of states of being from intense sexual arousal, copulation and post-coital relaxation right the way through to anxiety, isolation, despair and death. Noe is a materialist: he thinks what matters is the here and now, the flesh, the carnal. His heaven and hell is found in our present existence, with the heaven of fleeting or lasting sexual relationship no more than a temporary respite from the hell comprising all the bad stuff, which is the only alternative. 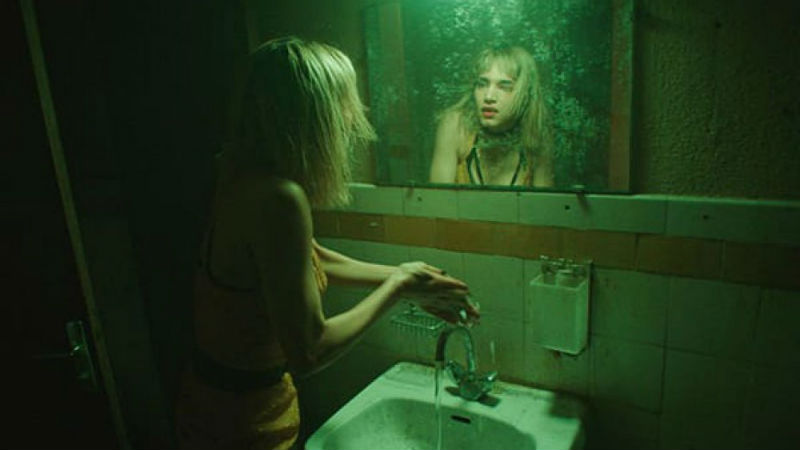 The title Climax suggests a narrative aspiring to and reaching some sort of peak, hinting perhaps at an ecstatic, sexual group orgasm. That’s a sort of tease, because for many of the characters here the climax that they reach via their frenzied, drug-fuelled, dancing excess is more like the hurtling over the edge of a bottomless abyss rather than anything they might actually want. Or perhaps the characters here really do desire something like that. Who knows?

Yet in terms of both dance and cinematic technique the film has the feeling of someone grappling with the very foundations of the languages of both art forms to say something which has never been said before. Such wilful and controlled articulation of form, for this viewer at least, plays against the nihilism. That’s not to say the film is a pleasant experience exactly, but it certainly grabs the attention from its opening frame and never lets go, pushing the viewer into sensory overload and beyond even as it descends into madness and disorder.

Noé is extremely gifted, knows exactly what he’s doing, pulls out al the stops and never misses a trick. The result is both profoundly exhilarating and deeply depressing: an upper and a downer all in one. Most definitely not recommended for those of a nervous disposition: quite possibly, however, the dirty movie of the year.

Climax is out in the UK on Friday, September 21st. On VoD on Friday, February 8th.