"Greasy movie"
Toni Collete, Rossy de Palma and a luxurious dinner going terribly wrong, what else could you ask for? French dramedy is out on DVD, BD and VoD on Monday, September 17th

There are no actual shaggy dogs in the movie, but Sthers’s plot is really only a shaggy dog story, that is a long-winded anecdote with extensive narration of irrelevant incidents that ends in an ironic anti-climax. But it is a graceful and satisfying shaggy dog story. Sthers is certainly good on the high level of build-up and in complicating the action.

You don’t expect to find Toni Collette and Harvey Keitel to be playing a married couple, but here they are, and very convincing they are too as Anne and Bob Fredericks, a rich, well-connected American couple, who move into an almost obscenely lavish manor house in romantic Paris.

Paris is the sixth star of the movie, looking just great, and of course romantic. That is its job and Sthers sees to that. She wants us to be jealous of the lifestyle of the rich, and of living in Paris. She makes a very good job of that. But Anne and Bob aren’t so romantic. They are in a waning’ loveless marriage. Still, they are enjoying themselves, in their fashion, indulging in their rich lifestyle. 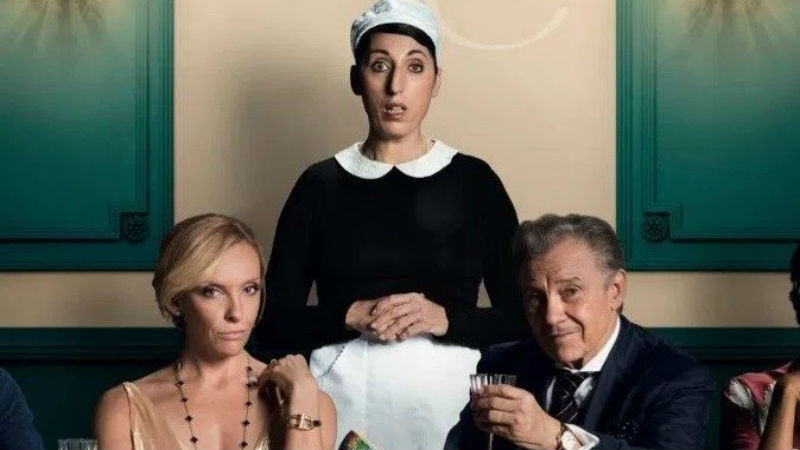 Anne has eyes for one of her dinner guests, Antoine Bernard (Stanislas Merhar), whose marriage to Hélène Bernard (Violaine Gillibert) isn’t going to get in the way of them meeting up clandestinely, any more than Anne’s marriage to Bob is going to stop her either. But that is an irrelevant incident and isn’t the story we have here. Anne is preparing a luxurious dinner for sophisticated international friends. Well, actually, she isn’t preparing anything at all. Her staff are. Ah, staff! How lovely to have staff! Sthers so wants us to be jealous of the lifestyle of the rich.

Anyhow, at that moment in pops English writer Steven Fredericks (Tom Hughes), Bob’s son and Anne’s stepson. You’d think Anne might be pleased, but no, she’s scandalised. Though unshaven and grungy, he wants to stop for dinner. That would mean there are 13 guests, which is unlucky.

In a proper posh panic, Anne improvises and gets her loyal Spanish maid Maria (Rossy de Palma) to disguise herself as a mysterious Spanish noblewoman guest. A hilariously reluctant Maria is ordered to go easy on the food, talk and the wine, and she’ll be OK. Anne dolls up the weird and drab-looking Maria in a posh frock, and Maria is of course the belle of the ball, funny and charming as she knocks back the chateau vintage expensive wine, and accidentally endears herself to a dandy Irish art broker David Morgan (Michael Smiley).

Ah, so this is the story. David chases after Maria, sending Anne into an unqualified repressed fury, and Anne ends up chasing her maid around Paris. Even with wealth, a husband and nookie of her own, Anne can’t stand the idea of this unexpected budding joyful love affair, and maliciously sets about plotting to destroy it and destroying Maria too. 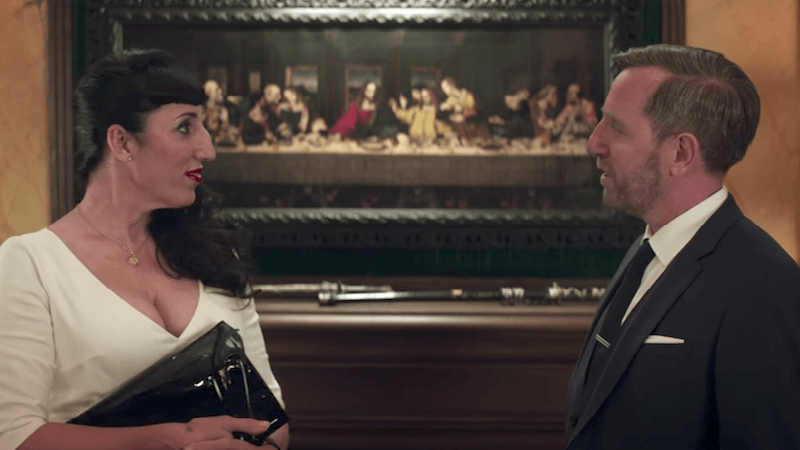 Obviously Anne is a great role for, well for whom? That nice Toni Collette doesn’t seem to fit the bill at all. But here she is relishing every moment of it, cast gleefully against type as a heartless rich bitch in great frocks. Come to that, Harvey Keitel hardly seems the type of actor for Bob, but Keitel settles down nicely, comfortably, into the complacent old husband role. He suggests he has the measure of Anne, and is quite canny enough himself.

You don’t expect to find Collette stripping off for a nude bathing scene, like she is Joan Collins in The Stud (Quentin Masters, 1978). Perhaps you expect Keitel to do the naked thing. But old Harvey has calmed down since the Scorsese films/ Bad Lieutenant years. Away from those ghastly TV ads, he has become a graceful, charming actor in his old age. Collette is up for anything, and she seems good at everything.

But the star of the show is of course Rossy de Palma. She is brilliant, funny, charming and touching, quite adorable. Collette gives her a good run for her money, but ultimately de Palma wins the prize. Keitel is sandwiched between the two, but his entirely different, unshowy acting keeps him alive in the picture. Smiley and Hughes give low-key, naturalistic performances that just about keep them in the picture, but they are kind of just ciphers, though key characters. It turns out Hughes’s character is writing the story we are seeing unfold, another irrelevant incident.

Although it isn’t an Agatha Christie, there are plenty of clues dotted along the way to the film’s likely ending. Fortunately, even if you guess it, even if it is anti-climactic, deliberately underwhelming, throwaway ironic or ultimately meaningless, it is still satisfying. Thanks to the Spanish treasure who is Rossy de Palma. And to Amanda Sthers, who manages considerable Oscar Wilde-style wit along the high level of build-up way.

Madame is available DVD, Blu-ray is also on all major VoD platforms on Monday, September 17th.