Do you think that the best testosterone-fuelled thrillers and noir films are across the Atlantic? Think again. They are right here on this continent, in the Men of the Edge collection

Many people think of Hollywood when they think of action movies, and they forget that Europe is also teeming with gangsters, bank robbers, crooks and all sorts of dirty criminals. These rogues are everywhere: in Southern Spain, on the roads of France, in the dark and derelict suburbs of Berlin and even in virtually “crime-free” Scandinavia. You just have to look! Thankfully, the Men on the Edge Collection, which is part of the Walk This Way initiative, is here to help us. Walk This Way is funded by EU Media (a sub-programme of Creative Europe) and is aimed at fostering and promoting straight-to-VoD European cinema.

We spoke again to Muriel Joly, Head of the Walk this Way, and asked her where the idea for Men on the Edge came from. She explained: “our aim is to create a collection of thrillers that would more embody the European film noirs in all their diversity. A typical genre carried out by a great tradition of famous authors and scenarists. Thriller is a genre for audience everywhere in the world thus this is one of the most successful Walk this Way Collection. We wanted to highlight the characters more than the genre, as all these films have in common to have heroes and plots that are intense, but each story is so different, as they take place in France, Scandinavia, United-Kingdom…” 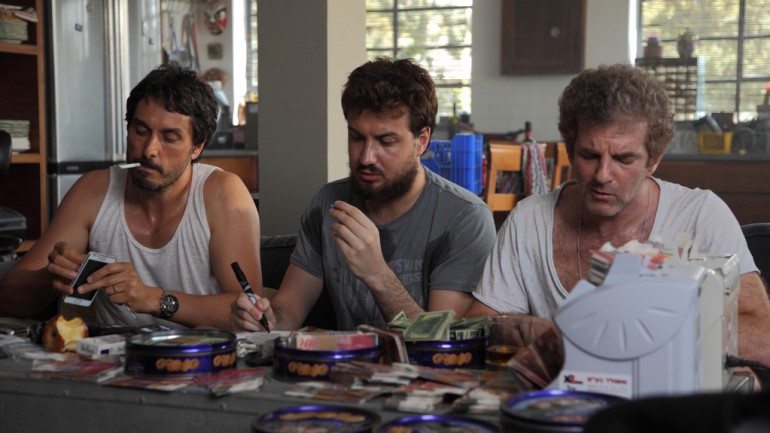 She goes on to described how the films are compiled: “Since 2015, 17 films (including this year’s releases) have been part of the collection. Each film is available in at least three European countries and we ask for the movies to be also available in at least one of the three priority areas outside Europe: United States, Latin America and Japan. We select them on both editorial and sales criteria, thanks to our network of sales agents partners.”

So let’s now change this notion that European cinema can’t go fast, wild and dirty. Our men too know how to shoot and misbehave. Long live our robber, swindlers and racketeers! Click here for the full catalogue of the Men on the Edge collection. And check out the two latest releases just below, both from – dirty reviews of both movies will follow soon!

A “go fast” convoy shipping a ton of cannabis Malaga in southern Spain is disrupted following a shoot out that results in the kidnapping of a tourist. The picture at the top of the article in from Fast Convoy.

Biography based on the life of conman Gilbert Chikli who invented the “CEO scam” and was able to persuade bank and company officers to transfer money by simply ringing them and impersonating their CEO. He is now living in luxury in Israel. The second picture illustrating this piece was taken from Thank You for Calling.