"Greasy movie"
Belgian duo create a colourful and plush tribute to the sexploitation genre, set somewhere in the sunny Mediterranean - from the BFI London Film Festival

Blood is red, the sky is blue and gold is yellow. All are plush and violent. The colours here are so bold that they will enthrall you from the very first minute. Aesthetically, this is a fascinating and audacious experiment. It will probably remind you of Dario Argento, giallo films and European caper thrillers from half a century ago (such as Jacques Deray’s Borsalino & Co, from 1974). In fact, Let the Corpses Tan is probably a tribute to all of them.

The movie opens up with bullets being shot on paint on canvas, on top of what looks like the semi-arid Mediterranean coast (despite this being a Belgian film, and the country being nowhere near the Med). The artificial colour palette neatly complements the natural hues and shades. Plus the montage is rather inventive, with fast editing, jump cuts and intertitles in very vivid red. 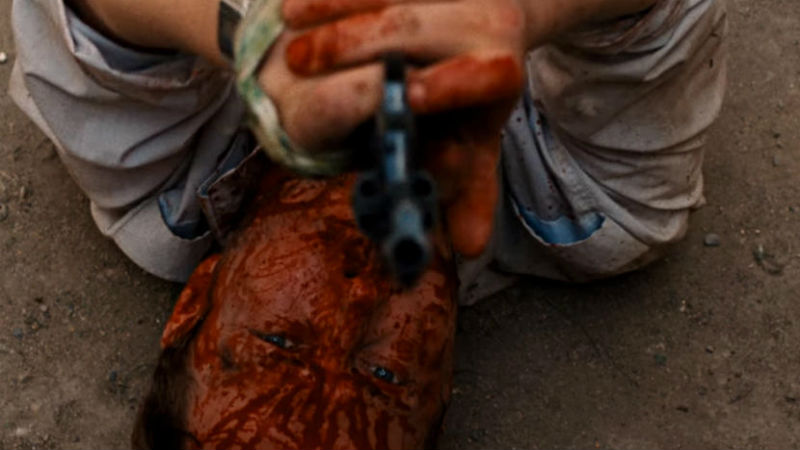 The story goes more or less like this: a small group of gangsters finds refuge (or perhaps they are just holidaying?) in a forlorn and near-ruined building complex overlooking the sea, where they also harbour a large amount of stolen bars of gold. These people include the middle-aged and sexy Luce (Elina Lowensohn), her younger lawyer-lover (Michelangelo Marchese), the alcoholic Bernier (Marc Barbe) and their big boss Rhino (Stephane Ferrara). Soon they are joined by Bernier’s beautiful Black wife, son and maid, who are blithely unaware of their criminal activities. The police shows up, and that’s when the bloodshed infused with a very dirty libido begins to unravel

This is also a vintage sexploitation movie. The violence is unabashedly extreme, and sex is almost invariably associated with the male gaze and rape. Both sex and violence are highly fetishised. Some people will undoubtedly find this a gratuitous and poor choice, particularly a shooting rape fantasy sequence. Yet this is not a vulgar movie, and I don’t think it’s an ironic tribute to bad taste, either. The portrayal of sex and violence is so exaggerated and caricatural that the movie even feels a little camp, in the Susan Sontag sense. In another context, this would come across as a sexist and cheap movie. But here it feels like a lavish and dirtylicious twist of the sexploitation genre.

Let the Corpses Tan is showing at the 61st BFI London Film festival taking place from October 5th to 15th.