"Dirty gem"
Biopic of the legendary French filmmaker Jean-Luc Godard and his former wife Anne Wiazemsky is a very touching, funny and yet profound tribute to the revolutionary fervour of the late 1960s in all of its wonderful contradictions - on Mubi in June 2020

Jean-Luc Godard epitomises the dilemma of the revolution like no one else does. He knows that cinema is a tool for liberation from capitalism, but he also understands that by making films you become a (by-)product of the system. He spent his life attempting to be different and audacious, and yet he was often accused of becoming a commodity and a caricature. So what does it take to be a revolutionary filmmaker? Godard has grappled with this question for decades. He’s probably still questioning, “redoubting” himself.

Michel Hazanavicious’s latest movie is a gentle, comprehensible and easy-digestible film about a very complex artist, who is often very difficult to stomach. Godard thrived on controversy, paradoxes and even rejection – he both loathed and admired his most ferocious critics: the students and activists. His fiery, rowdy, peremptory, arrogant and blasé temperament are efficiently delivered by the actor Louis Carrel (who also looks a lot like the director at young age). His sharp humour and caustic wit are successfully inserted in the movie script. 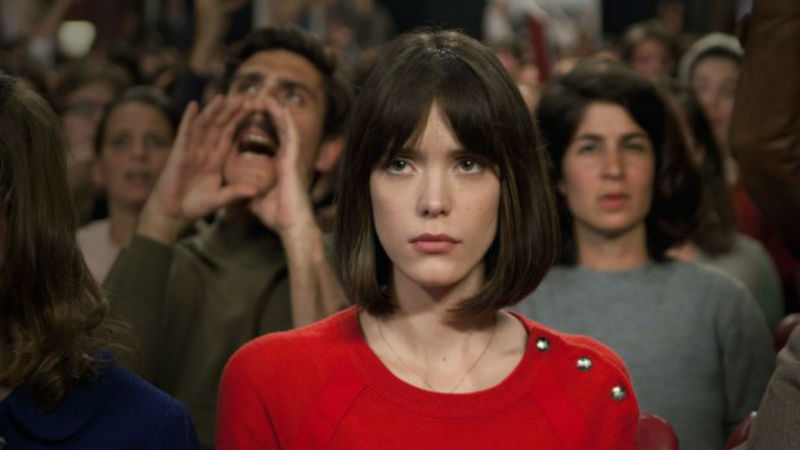 France has recently encountered a backlash of extreme right-wing politics in the shape of Marine Le Pen. So it’s refreshing to see a film that’s prepared to remind the country of its revolutionary streak, and its Marxist-Leninist leanings. One of Godard’s remarks in the film is very prescient and representative of the past few months in France: “politics are like shoes, you have the left and the right, but sometimes you just go barefoot”. It’s almost as if the director knew the country was about to shun both the left and the right and instead elect the centrist Emmanuel Macron as president.

The Redoubtable takes place in 1967, a year before the student protests erupted in Paris, and when Godard to married Anne Wiazemsky (Stacy Martin, pictured above) – that’s NOT Anna Karina, whom he divorced two years earlier. The film focuses on both his unpredictable demeanour and Anne’s difficulties in putting up with his cold and confrontational style, which extended from politics to bed. Beneath the enfant terrible façade, on the other hand, dwelled a very insecure man fearsome of his limitations. Plus the awareness of his fallibility and intrinsically paradoxical aspirations caused him to attempt suicide. Luckily he didn’t make it to the famous Claude Engel/Serge Gainsbourg song Chatterton. 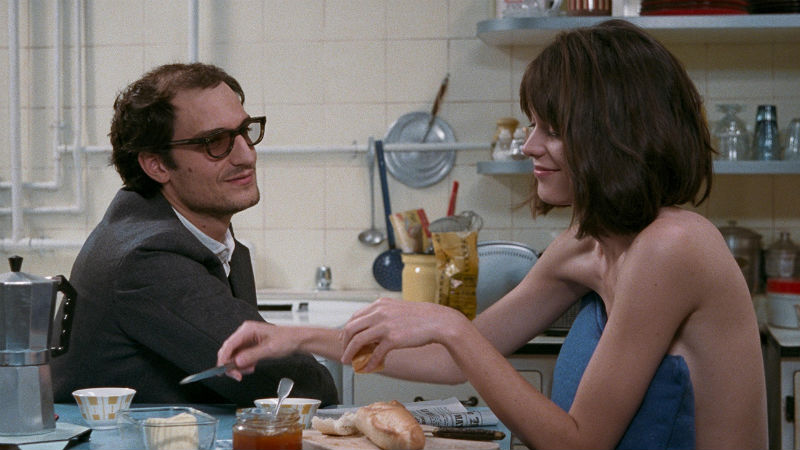 The movie also discusses the duality of Cannes, the very event where it’s premiering right now. Godard had many reservations about showing his films there, as the Festival in many ways represent a powerful establishment and was disliked by students and activists. Reconciling artistic freedom with commercial objectives is a challenge not just for Cannes, but for any film festival anywhere.

Don’t expect to see, however, an audacious movie experimenting with language in the way Godard did (and still does). There are bite-size references to the ingenious devices created by the director, such the faux raccords, the jump cuts and film negative. But they are a charming tribute to the director, and do not drive and define the film (which is a pity). This is not a brassy biopic of a subversive genius, like the outstanding Gainsbourg: A Heroic Life (Joann Sfar, 2010) about the (in)famous French musician. Instead this is a very straightforward eulogy to a living legend. Still a very pleasant, didactic and commendable one.

Redoubtable showed 70th Cannes Film Festival in May 2017, when this piece was originally written. It is also showing at the 61st BFI London Film Festival, taking place from October 5th to 15th. It is out in cinemas on Friday May 11th, 2018, and available for digital streaming later in the month. On Mubi in June 2020.