"Dirty gem"
Should I stay or should I go? Smart thriller wherein a man’s life is literally split in two as he chooses between an ill-advised road trip to Vegas or staying at home with his hated stepfather - now on DVD and VoD

Opening with a lengthy, single locked off camera shot title sequence of a woman pole dancing, this then switches to law student Harper (Tye Sheridan) visiting his comatose mother in hospital. He’s convinced his stepfather is cheating on her using out of town business trips as a cover. Hitting a bar to drown his sorrows, he overhears a conversation in which Johnny Ray (Emory Cohen) explains how his girlfriend Cherry shot a man who cut her face. Johnny Ray berates Harper for eavesdropping and drags him to the pole dancing joint where Cherry works and whisky gets Harper talking.

Brief echoes of Strangers On A Train (Alfred Hitchcock, 1951) are played up in the film’s trailer (at the bottom of this review) as Johnny Ray offers to take care of his stepdad at a price. But Johnny Ray has a different deal in mind: he wants Harper to accompany him on a shady, out of town journey to Vegas. He refuses to introduce Harper to Cherry (Bel Powley) when she approaches the table.

Next morning, the hungover Harper answers his door to find Johnny Ray, with Cherry in tow, calling to pick him up. The screen splits into two images, one for each man. Will Harper go with Johnny Ray or retreat to the safety of his house and shut the door behind him? The second split screen image cuts to Harper. In one image, he goes, in the other he stays. Thereafter, two parallel narratives follow what happens to him in both cases. Where he goes, it’s a cross country drive into hell featuring a roadside encounter with a suspicious state trooper (Gbenga Akinnagbe) that goes bad and, in a nod to Blue Velvet (David Lynch, 1986), a visit to a dubious friend of Johnny Ray’s named Frank (John Lynch). Where he stays, the antagonism between him and his stepfather Vincent (Stephen Moyer) will escalate into murderous mayhem involving a kitchen knife, recalling films by not only Hitchcock but also Brian De Palma. The film also references Detour (Edgar G. Ulmer, 1945) with its bleak narrative of being in the wrong place at the wrong time. 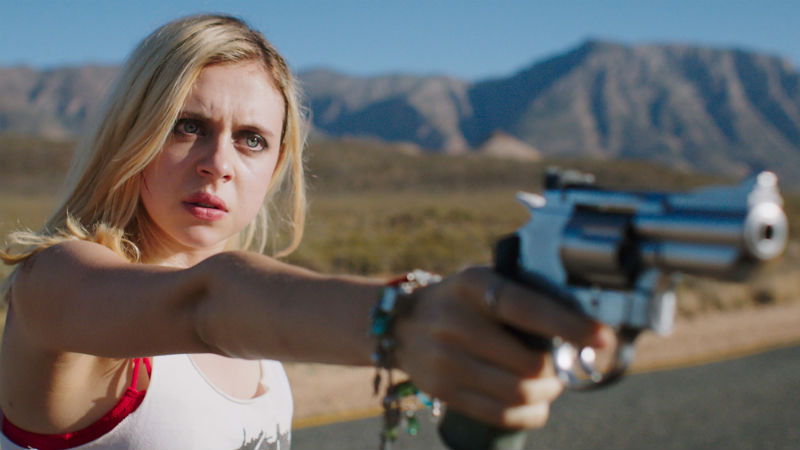 The movie develops into a split narrative, which follows a character’s life in more than one direction after a decisive incident – similar to Blind Chance (Krzysztof Kieślowski, 1987), Run Lola Run (Tom Tykwer, 1998) or Sliding Doors (Peter Howitt, 1998). But while his film is crammed with cinematic references, Bristol-born writer-director Christopher Smith (Triangle, 2009; Black Death, 2010) makes the territory very much his own and has a lot of fun both creating memorable characters and playing around with the narrative form(s) in which he places them. At the centre is the concept of the decision which changes things – and of how things might have worked out if a different decision was made. It’s this concept for which Smith so brilliantly utilises split screen, to emphasise the moment of the decision.

But there are other, dirtier pleasures here too. The plot/s is/are a mix of sleaze, manipulation, deceit, threat, abduction, violence, murder and more. It’s a genre-busting crime movie par excellence, switching between personal crime between family members in the one narrative strand and professional crime between cops and robbers in the other. For good measure, Harper’s best mate Paul (Jared Abrahamson) spends his time doing drugs or consuming internet porn, rendering him rather less helpful to Harper than he might otherwise have been. (There’s the film’s main “if only” theme again.) This thoroughly satisfying little picture even has the wit to throw in an hilarious outtake which adds another minor element to the overall package as the final credits roll.

Detour was out in UK cinemas in May, when this piece was originally written. It’s out on DVD and VoD on July 24th.

A runaway teenage boy in a constantly raining Tokyo falls for a girl who can replace rain with sunshine – animated Japanese feature is now available on VoD [Read More...]