A bravura opening shot pulls from rainswept Tokyo in through a hospital window to a girl waiting by patient’s bedside recalling nothing so much as the heroine of everyone’s favourite anime identity thriller Perfect Blue (Satoshi Kon, 1997) reflected against a train carriage window with a Tokyo cityscape visible beyond, but where Kon uses such imagery as an entry point to multilayered realities, Weathering With You’s vision never really extends beyond trying to recreate and repeat the formula that rendered its director’s previous Your Name (Makoto Shinkai, 2016) such a runaway success.

Like Your Name, Weathering With You centres on a teenage boy/girl romance but instead of the gender body swap and time travel devices in the earlier film – which probably shouldn’t have worked but somehow did – Weathering has an equally flimsy plot device about a girl named Hina who possesses the ability to turn rain into sunshine. This is set against a far more interesting backdrop of Tokyo being permanently shrouded in rain with echoes of global warming thrown in for the closing epilogue, two years after the main story, in which large parts of the city have disappeared beneath the rising sea level. 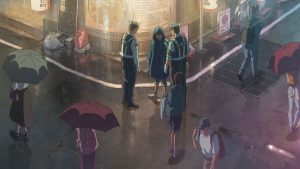 Most of the film centres around 16 year old runaway Hodaka who has come to Tokyo presumably to escape the type of small town existence portrayed in the rural sections of Your Name as Shinkai tries desperately not to repeat himself, a goal at which he succeeds admirably for about the first reel or so, arguably Weathering’s most engaging section. An early highlight during Hodaka’s inbound ferry journey sees him rush onto deck just in time to be caught in an exhilarating downpour only to be saved from being swept away by the swift action of unkempt, grownup Kei who subsequently gives the boy his card and tells him to get in touch if he ever needs help.

Hodaka knows better, so walks away – but after living as a homeless person on Tokyo’s mean and rainswept streets for a while and being unable to secure work to support himself because of Japan’s stringent minimum working age laws, he changes his mind and ends up the technically illegal and poorly paid if housed and fed dogsbody at Kei’s magazine publishing company where alongside a young woman named Natsumi he starts to research supernatural and paranormal stories for possible publication.

Kei sends Hodaka out to investigate the phenomenon of the sunshine girl, who can temporarily cause the rain to stop and the sun to come out, in turn pushing the plot towards boy meets girl romance when Hodaka befriends sunshine girl Hina and her primary school age little brother Nagi. Here Weathering repeats Your Name’s teen romantic clichés without holding the audience’s attention quite as effectively. 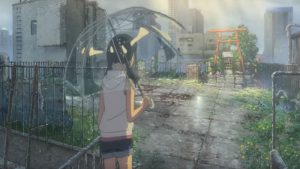 Shinkai also falls back on a visual, fantasy device, a temple which turns out to be a portal to another world where Hina floats in the sky as if underwater surrounded by mysterious shoals of sky (or are they sea?) fish. Your Name cleverly wove its not dissimilar visual conceits into a complex tapestry but Weathering can’t quite to pull its various constituent parts together, leaving the viewer to founder somewhat even as he or she admires its more impressive elements.

However the rain and sunshine imagery, while it may be a sideshow to the main romantic event, proves itself a considerable and genuinely captivating asset. Much artistry has gone into animating rain dripping down window panes or splashing in multiple drops onto pavement surfaces – and there are a great many such sequences. Equally, when Hina halts the rain for a few hours which she does with Hodaka as they attempt to earn a little extra money, the blue sky, sunshine and bright light provide a welcome contrast to the constant downpour and drab colour elsewhere.

The final flooding of Tokyo builds effectively on all this, but sadly it’s too little, too late. You can’t help feeling that far more could have been done with this flooding concept in both script and overall design. Despite the promise of that opening shot, Weathering ultimately fails to deliver the multiple reality levels of Kon’s Perfect Blue. Worse, it never integrates its ideas into a coherent whole the way Shinkai’s own, earlier and superior Your Name did while its romance simply isn’t as engaging. A great pity.