A film of chaos and mayhem, but also one that’s as poetic as anything I’ve ever seen. This might be the most accurate way to describe Moonage Daydream, a film that transports us to another realm where we become mere passengers in the journey of this arthouse anomaly. To capture the life of David Bowie as he would have wanted is no easy feat, a man who lived his life with so much vibrancy and creativeness, and with a need to enjoy life no matter what, because as Bowie says in this film “I worship life, I love living”. Brett Morgen (the man behind the acclaimed 2015 documentary Cobain: Montage of Heck) has created a cinematic marvel, this film is the embodiment of everything that Bowie professes; it is unhinged, it is not affected by a need for acceptance or tethered down by cinema’s restrictive ropes, nor should it be because it’s near to being perfect the way it is.

The film was created in a way that Bowie liked to think of himself: as a blank canvas of creativeness with no limits to what could potentially be achieved. Moonage Daydream features never-before-seen footage and performances of the man himself, while taking you on a journey of exploration to investigate Bowie’s creative, spiritual, and musical adventure. There is no real structure to this film in terms of narrative progression. It is an arthouse film in every sense of the word; it attempts – and succeeds – to break new boundaries, parading as multiple genres, and never adheres to one particular mode of a documentary.

There are several moments throughout the film where you are taken out of real life and transported to a brand-new inter galactical realm of thought; the visuals are magnificent if not slightly intense, but it’s all part of the experience. There is the potential to become lost in an ocean of vibrance if it wasn’t for the calming influence of Bowie’s voice that narrates this epic adventure. Bowie guides us on a pathway of thought, but he never forces us into any particular train of thought (even though the visuals have the potential to hypnotise us into feeling that way) – he is a mere guide, and everything is still left up to interpretation. 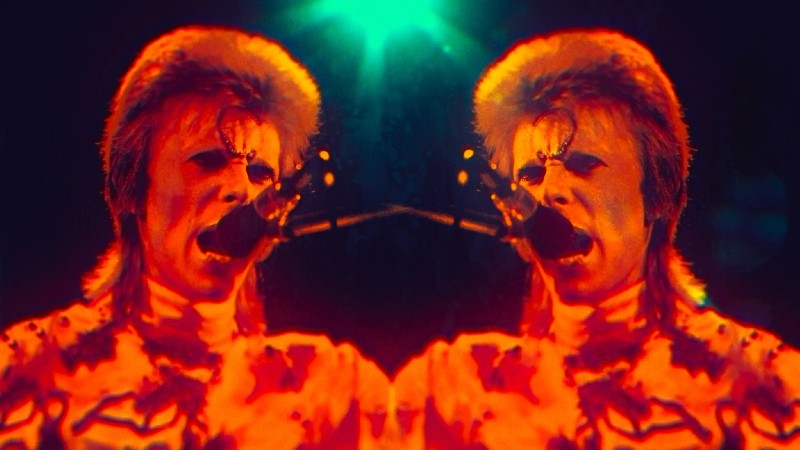 But even with Bowie’s narration being such a calming influence on this film, the visuals really are otherworldly, and it is easy to become engulfed by sensory overload – LSD was a prominent tool in rock music, and these montages feel like one big acid trip. The creativity behind it all lends techniques from several other films, incorporating them into the very narrative while effortlessly syncing up with the commentary. How can something filled with so much disorganisation feel so seamless and in tune, we hear you ask? Well, it’s down to the editing; editing of such high quality by the film’s director that it’s almost hard to believe it has been done by a human. It’s manic but incredibly polished, filled with rapid cuts, lengthy sequences, moments of animation or tranquillity, a shed full of photographs intertwined, and so much juxtaposition that it makes the stuff in 2001: A Space Odyssey look like amateur hour.

Moonage Daydream is effective at isshowing the moments of Bowie’s life that are worth presenting; there is never a need to deface his character by highlighting his drug use or any of his other past demeanours, which is a good thing because we don’t need to watch them, this is a film about his creativity and his genius.

If you are one of those people that wasn’t a fan of Bowie, possibly thinking of him as too off the cuff and untethered, then this film is brilliant at highlighting the true personality of the man – that’s if there was ever one specific personality, of course, something he makes clear throughout the film. It never attempts to paint him as this godly figure that so many fans envisioned him as, I think it does the complete opposite, it creates an incredibly human version of Bowie, one that we can all relate with. The film’s construct harnesses the power of multiple personalities, much like Bowie and his plethora of characters, passions, and hobbies that he experimented with over the years. This might not be a perfect film (although it is very close to being so) but it’s definitely the most perfect film that can be made that explores the life of David Bowie, one that the man himself would have loved to create.

Moonage Daydream is in cinemas across the nation 0n Friday, September 23rd.