The year is 1862. Ireland is still recovering from the Great Famine, which claimed more than two million lives and left the country’s morale devastated. A young girl named Anna (Kíla Lord) has inexplicably stopped eating, and somehow remains mysteriously alive four months later. English nurse Lib Wright (Florence Pugh) is recruited by the local authorities in order to guard her, ensuring that she is indeed not taking any food. They wish to establish whether her parents are committing fraud, or if a miracle of some sort is indeed taking place. Some people suspect Anna is feeding on magnetic waves or some unknown particles. The girl claims that she’s eating “manna from heaven”.

In the beginning of this 103-minute, Anna is strong and standing on her feet. Three quarters of the movie later, she can barely talk. And barely anything happens at all, in a tediously flat narrative arc and melatonin-inducing plot. Lib sets out to convince locals that the mother has been secretly mouth-feeding her daughter “like a bird” when she kisses her good-morning and goodbye. Having lost a child herself, the English “Nightingale” cannot bear the thought of allowing Anna to die. She is determined to save the young girl’s life. They create an awkward bond, with Anna calling her “Nan”, which is fact short for “Nancy” (a nickname she has pulled out of nowhere, as with most of the narrative devices in this movie). They exchange philosophical platitudes, with the film purporting to establish some dialogue between faith and reason, or perhaps some comment on the consequences of the Famine, or the relationship between England Ireland. I have no idea of the director’s real intention

The parents play an ambiguous role. It is never entirely clear whether they are trying to profit from the commotion generated by their child’s ordeal (a cunning writer from the Daily Telegraph is on standby, attempting to score a journalistic scoop) or if they genuinely think that their daughter has become some sort of saint (in Catholic faith, sacrifice is always the route to sainthood). At one point, Anna says that she won’t allow her late brother “to burn in the flames of hell”. She is referring to a younger sibling who tragically passed away year earlier. Yet another loose end that doesn’t seem to tie with anything else in the story. 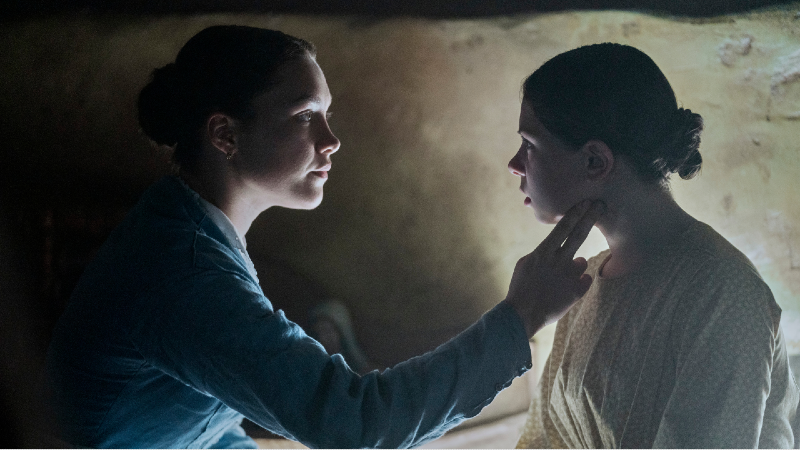 Anna is painful to watch. And not because her malnutrition, which worsens by the day. But instead because of her insufferable devotion. Her lines are cliched, her delivery is repetitive and dull. The final twist isn’t entirely predictable, yet it’s hardly original. Plus Lelio starts and ends the film in the actual studio setting, trying to make some statement about the subjectivity of characters and the active role of audiences. As with much of the film, this denouement has very little to say. The outcome is a profoundly pretentious and downright boring movie. You are welcome to try and milk some deep philosophical meaning, yet you may might end up succumbing to filmic malnutrition.

The photography of rural Ireland with its consistently gloomy climate is largely effective, complementing the sullen atmosphere of the drama. But this isn’t enough to save an otherwise mediocre production. Irish poet and playwright Oscar Wilde famously wrote in Cahiers du Cinema in the year of 1948: “cinematography of the weather is the last refuge of the unimaginative filmmaker”. He was absolutely right!

I ask myself why a talented and audacious filmmaker such as Lelio left his native Chile, where he authored masterpieces such as Gloria (2014) and A Fantastic Woman (2017), and crossed the Atlantic in order to create such an empty and redundant film. Not to mention the tragic Hollywood remake of his very own 2014 drama. Sometimes you just wish people would stay closer to their roots.

The Wonder showed in the Official Competition of the 70th San Sebastian International Film Festival/ Donostia Zinemaldia, when this piece was originally written. It is out in the UK in October, as part of the BFI London Film Festival. In cinemas on Friday, November 4th. On Netflix on Thursday, December 15th

A promiscuous and rootless woman who has escaped from the strict North London Orthodox Jewish community returns following the death of her rabbi father - on Mubi on Sunday, June 5th; also available on other platforms [Read More...]