"Mostly clean movie"
Lelio remakes his Chilean drama about the eponymous 50-something divorcee with Julianne Moore in the title role - in cinemas from Friday, June 7th

When I saw the Chilean film Gloria (Sebastián Lelio, 2013) some years back, I was blown away. The story of a 50-something divorcée going out and finding herself sounded like the sort of movie I’d hate… and yet, against the odds, Lelio’s film, particularly its feisty central performance by Paulina Garcia, completely won me over. I recall it having a pretty decent Latin music soundtrack too, culminating in Umberto Tozzi’s triumphant disco anthem Gloria.

Leilo having in the interim carved himself out a respectable international movie career – an Oscar for A Fantastic Woman (2017), an impressive change of pace with the British drama Disobedience (2018) – he’s had the inevitable offer to remake some of his Chilean output for the US market. In Gloria Bell, adding the character’s surname to the title for the remake, he collaborates with sometime Oscar-winning actress Julianne Moore.

So all the ingredients should be there to deliver something very special, whether you’ve seen the original and are going for the comparison or you are coming to the story for the first time here. And yet, somehow, the new film feels flat. It lacks the magnetic quality of the original. 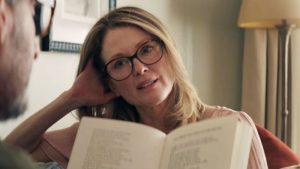 Maybe it’s the difference between Chile, rarely seen on the screen here in the English-speaking world, and the US whose movies have flooded our cinemas. Maybe it’s the 80s’ US disco music on the soundtrack which replaces the original’s far more vibrant Latin selection. Certainly, it peps up at the end when the title song (this time the American version recorded by Laura Branigan) comes on, but it’s far too late by then.

Apart from shifting the story from Santiago to Los Angeles and the heroine from Chilean to American, the story is pretty much identical. So it’s hard to believe the problem is the script adaptation. This even applies to the trailers – the trailer for the original Gloria can be seen for comparison further down the page below the Gloria Bell trailer.

The plot has 50-something Gloria (Moore) go to discos in search of love and eventually embark on a relationship with divorced father Arnold (John Turturro). Cue unflattering, over-fifties sex scenes in which he has to remove a medical girdle he wears round his waste, all very commendable in terms of visual representation of that demographic. 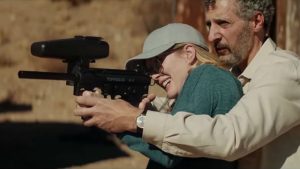 Gloria has pretty much learned to let her grown up kids get on with their own separate lives while she gets on with hers. Her son Peter (Michael Cera) is dealing with an absent partner who has left home for a while to find herself and leave him to bring up their child. Her daughter Anne (Caren Pistorius) is on the verge of moving to Sweden to make a life with a surfer she met via the internet. By way of contrast, Arnold seems to be constantly under pressure from his two daughters who we never see but are constantly making demands of him over the phone.

After much resistance, Arnold is persuaded to come over for a meal and meet Gloria’s family – not only her kids but also her ex-husband. The evening proves too much for Arnold and marks the beginning of the end of his and Gloria’s relationship. Except that, try as she might to cut him off, Arnold doesn’t want it to let her go…

Julianne Moore is on the screen most of the time. Where the original film and Paulina Garcia’s seemingly effortless performance in it felt like a welcome breath of fresh air, however, if you’ve seen the original, this one feels like a pointless retread with Moore failing to add that certain something that Garcia brought. Which is a pity, because on paper this remake sounded like it might be really quite something.

Gloria Bell is out in the UK on Friday, June 7th. Watch the film trailer below:

And here, for comparison, is the trailer for the original 2013 Chilean film Gloria:

A promiscuous and rootless woman who has escaped from the strict North London Orthodox Jewish community returns following the death of her rabbi father - on Mubi on Sunday, June 5th; also available on other platforms [Read More...]