"Dirty gem"
A promiscuous and rootless woman who has escaped from the strict North London Orthodox Jewish community returns following the death of her rabbi father - on Mubi on Sunday, June 5th; also available on other platforms

Highly respected rabbi Rav Krushna (Anton Lesser) addresses his synagogue about the qualities that make mankind different from the animals and the angels. Man, he says, has free will. Alone in creation, he is able to disobey his creator. Then, as if struck down for preaching some treatise in defence of apostasy, he collapses.

Ronit Krushka (Rachel Weisz) is a British portrait photographer working in New York. She is promiscuous, rootless and seems to be looking for something although she’s no idea what. One day she gets a phone call which makes her return to London and the Hendon orthodox Jewish community which she left years ago. She heads straight for the house of Dovid Kuperman (Alessandro Nivola), at once her father’s favourite pupil (and likely successor as Rav) and an old childhood friend. She’s a little surprised to find he and her other great childhood friend Esti (Rachel McAdams) are now man and wife. The couple agree to put Ronit up during her stay. 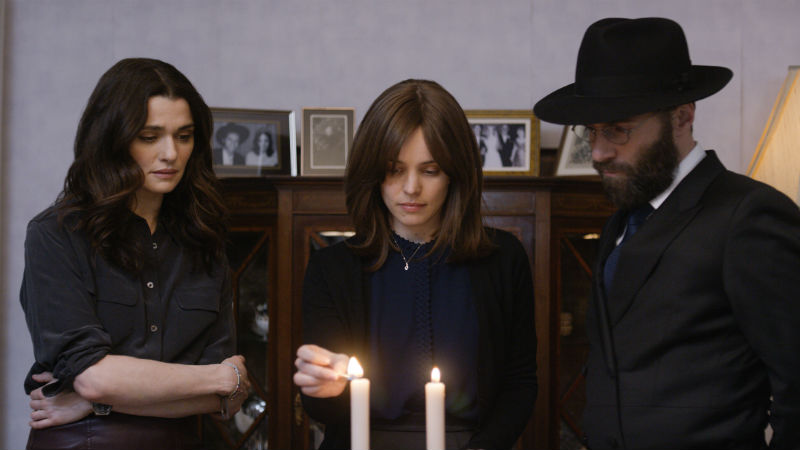 Two things become clear as the narrative plays out. One, Dovid’s relationship with the Rav is the father/child relationship that Ronit never had with her father. Dovid spent hours discussing Jewish religious texts with him while Ronit wasn’t really interested. But now she’s back, she wants proof that her father really did love her. Scant evidence is forthcoming on that front. Two, Ronit and Esti were in love back in the day. Ronit chose freedom from the religious community and got out; Esti married a husband as the community expected and made herself fit in. However although Dovid is a good man who cares deeply for Esti, there’s a certain spark missing in the relationship. A spark which threatens to ignite when Ronit returns.

There is much to admire here – tortured performances which plumb the depths of the soul from its two female leads, a feeling that the Orthodox Jewish background has been researched and put on the screen at a very deep level, unresolved issues with a departed father. It’s a world unfamiliar to the movies and to most cinemagoers, but the film plunges you right in. Director Sebastián Lelio and cameraman Danny Cohen seem completely in sync in their dealings with the cast, ensuring that those amazing things that actors do end up on the screen without the mechanics of film making getting in the way. 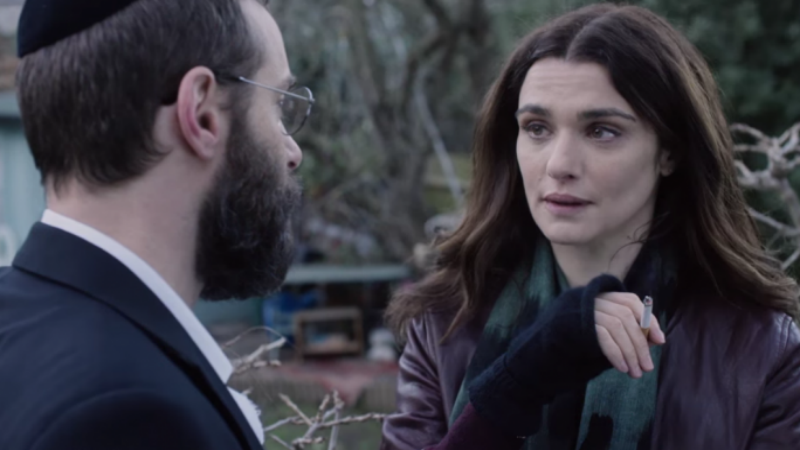 The theological and human contradiction of the Rav’s opening and final address underpin everything that follows. What is obedience? What is transgression? What’s more important – the community or the individual? As the two women struggle with their feelings for each other and events take their predictable course, you can almost feel the boxes of a contemporary Western individualist view being ticked off. Almost. The piece seems to be at its strongest where its characters struggle with these tensions.

Weisz is one of the instigating producers behind the project and has chosen well both in source material and director. It’s a surprisingly effective and cinematic movie adapted from a novel, a process which all too often produces the exact opposite outcome. Leilo having proved himself highly adept at stories involving women’s issues such in Gloria/2013 and transgressive sexuality in A Fantastic Woman (2017) here delivers a compelling story in a completely convincing, parochial North London environment. The result could so easily have been a tedious plod, but somehow, it all comes together. An impressive achievement.