"Mostly clean movie"
Meandering western led by a stellar performance covers some important themes, but it struggles to grip hold of its audience - in cinemas on Friday, May 13th

Adetermined mother with her back against the wall: “Fight for my children, fight for my life I will, make no mistake of that”. This is just one of the many examples of the steely will of Molly Johnson, the Drover’s wife. But from the first 10 minutes, you understand what this fearsome mother is all about, and yet she carries a burden that enhances her character – it’s a credit to the acting, the writing, and the direction by Leah Purcell to imagine such an authoritative figure. But that really is the shining light for this film because the rest of it just feels like a damp squib.

The Drover’s Wife is a cinematic reimagining of Purcell’s acclaimed play of the old Henry Lawson short story, and it would be interesting to see the play and compare it with this film because the magic in one has been lost whilst attempting to transfer it onto the screen. What some outlets have dubbed as “compelling and engrossing” leaves a lot of questions unanswered, it meanders through three-quarters of the film with a total lack of either. And when this fierce, feminist revenge western finally kicks into gear, it feels very uneven and incredibly rushed – that’s what can happen when you try to squeeze all the action into the final act.

The Snowy Mountains in the Australian Alpine Country can be a treacherous place, but for the heavily pregnant Molly Johnson and her four children – who are tucked away in a small cabin – it is home. Her husband Joe is away for months on end droving cattle, it is now up to the fierce Mrs Johnson to look after her family, and with the slightest sign of danger, and a shotgun at the hip, she’s willing to do anything to protect them… anything.

Molly soon finds an Aboriginal fugitive called Yadaka (Rob Collins) on her land, but what begins as a cautious relationship between the two soon settles down to the point of respect, as they bond over past events that have led them to this moment. Now, this interaction is one of the key elements of the film’s narrative, and a moment that you would expect to spark some life into this film just doesn’t. It takes its sweet time to reach anything of interest (talk about a slow burner), because in the lead up to the moment, the film is submerged in a lot of ordinary dialogue and an incredibly intrusive score by Salliana Seven Campbell– music can be a powerful tool for westerns, but it must be intricately nuanced, this score was nothing of the sort and just ends up painting it with a melodrama tag, which is a hard tag to drop. 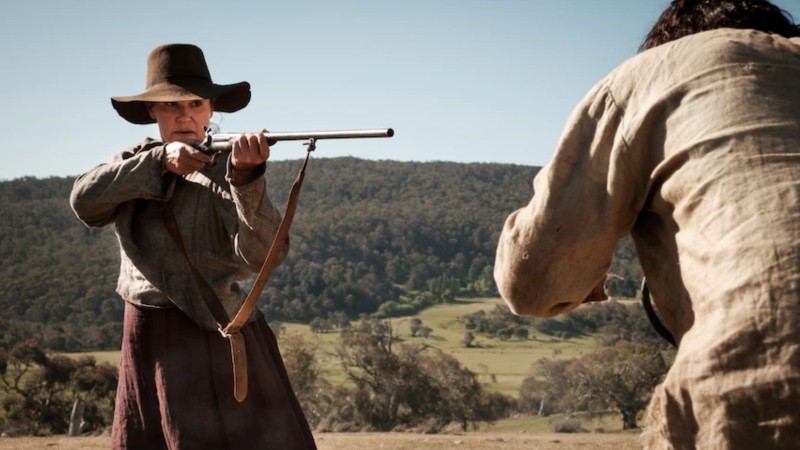 The film meanders along at such a gentle pace that you are wishing Molly would stop pointing the gun at people and actually use the thing, and that is the harsh reality of it. And then, we finally arrive at the film’s long overdue redemption – after about seven or eight oddly placed time lapses that added no magic to the proceedings either – so now we have a revenge thriller on our hands. But it’s a revenge plot that is given no time to expand, no space to breathe to become the film’s crowning glory. The culminating act just dangles down in front of us before the noose is eventually cut from around its neck.

But away from all the disappointment that shrouds the film is a powerful message about discrimination against Aboriginal people (often labelled as guilty criminals before a verdict is even met), the strength of a mother who fights for her one true love, and the underlying truth that lies deep within the story and is the structure to the films one secret: the voices of abused women who want some justice, but their cries are constantly ignored and lost in the wind.

So, just like the cries themselves that are slowly being carried off into a world of obscurity, the films unclear and anti-climatical ending just adds to the woes of the women, and to the film itself. And so, with all the film’s good qualities is a seemingly long list of poor ones. But with that, Leah Purcell has now completed her “trilogy” of adaptations of The Drover’s Wife, albeit with varying degrees of success.

The Drover’s Wife is in cinemas on Friday, May 13th.