"Dirty gem"
Four Brazilian artists living in political exile aim to transform trauma into art and beauty, in this reflective piece of filmmaking - at the Rich Mix on Saturday, May 28th

The internet has become the new ‘space of appearance’, the stage where all contemporary wars and ideological disputes are taking place. Our increasingly immediate access to it, our daily, near-constant use of it, and its physical proximity to us, by way of our various screens, give it the power of becoming an extension of our very perceptual and cognitive body.

But we have not yet been able to tame and master the ever-shifting matrix into which we have been propelled, for this space also radically reconfigures the interrelations between subjectivity, public opinion and political power. Indeed, the last few years have seen the rise of the fake, utilised to tribalise and divide the population. The problem begins when usual standards of evidence, to substantiate opinions and claims, are abandoned, giving way to simplified narratives and click-bait propaganda, advertised to easily sway and mobilise the population against particular sectors or individuals.

The four protagonists of Resistances have been the victims of a highly coordinated defamation campaign, whose purpose has been to silence and neutralise voices coming from the intellectual and artistic sphere of Brazilian society, making visible the illegitimate uses of new technology for the purposes of political repression. Exposed to a whirlwind of intensely violent homophobic and misogynistic attacks, the four protagonists of Resistances were forced into exile when the intimidations became explicit threats to murder.

For what? What were the reasons for the concoction of such an aggressive machinery? The philosopher, writer and painter Marcia Tiburi’s ‘crime’ was to publicly condemn the 2016 coup, defending former Presidents Dilma Rousseff and Lula da Silva; Jean Wyllys, politician, activist and visual artist, launched a Twitter campaign to denounce Bolsonaro’s genocidal refusal to act against the Covid pandemic; the artist Wagner Schwartz acted out a performance piece entitled ‘La Bête’, naked, in a museum; and Debora Diniz, a University Professor and activist, appeared before the Supreme Court in a speech pleading for the decriminalisation of abortion. These events led to their casting out as pariahs, forced into a situation where they had to leave behind their lives, their country and past. Resistances is therefore a vital testimony on the traumatic effects of aggressive smear campaigns, of the proliferation of fascism in the form of intrusions and attacks, verbal abuses, and death threats, on the stage of the internet, which becomes an oppressive host for manufactured hate.

But Resistances is keen on challenging the idea that the internet can only serve such nefarious, anti-democratic purposes. Indeed, the film comes in the form of four episodes, in a series that could continue ad infinitum — ‘Resistances’, a collage of short interviews which depict particular acts of resistance from the distance of exile. As the slogan of the series implies, its purpose is to fight political defamation ‘with words and art’. At the same time, it acts to encourage political activism to make use of new media resources, such as the ever-expanding environment of internet communication. 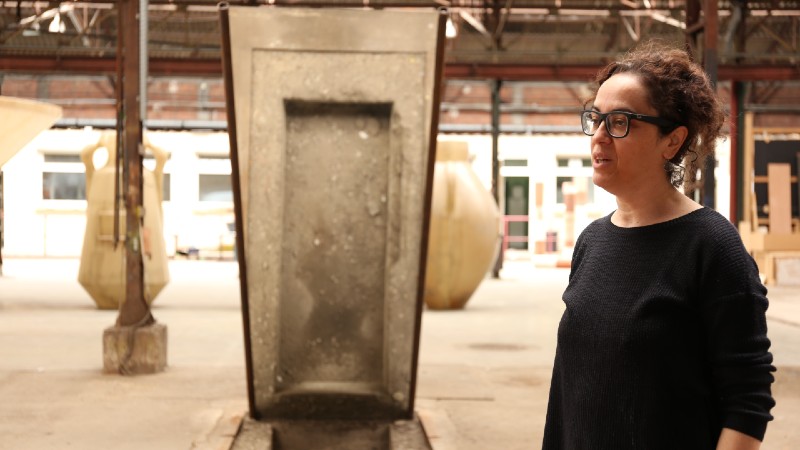 To illustrate the revolutionary potential of the internet, Schwartz quotes the German poet Hölderlin — “wherein lies the danger, grows also the saving power”. In a move reminiscent of Walter Benjamin’s ideas on the art of cinema as a vital tool for a broadening of class consciousness, the filmmakers point at the radical possibilities of communication and organisation to be found in visual culture and the internet, worked out as a space to hold the powerful accountable, and to offer balance to the fake news apparatus. Indeed, the film’s ideological drive is to create the desire to take the corrosive spirit of the internet and to change its nature from within, in order to form a true ‘ecosystem of democratic values’.

The form of the documentary itself plays out in the aesthetic field this courageous and optimistic view of the use of the internet. An awareness of its marketability is palpable: the film makes an effort to easily fit into the social media landscape in order to maximise its potential to influence. Its innovative editing techniques, and its use of the language of social media, shows a versatility and adaptability to the culture of the internet where all content needs to be short, dynamic and to-the-point.

The episodes all start with an audio montage of the hateful slurs directed at the protagonists. These stand in as a representation of the ‘cabinet of hatred’, a form of mediatic terrorism that turns its victims into ‘radioactive characters’. Contrasting with the shocking smears by the mouthpieces of fascism, the four artists’ reflections on creativity aim at transforming trauma into art and beauty, in order to communicate a sense of togetherness rather than of isolated resentment.

Resistances is showing on May 28th at the Rich Mix. Click here in order to purchase your tickets for the film now. You can also buy a combo for Resistances + Francisco El Hombre concert. And don’t forget to purchase your tickets for DMovies’. first production ever The Coup d’Etat Factory on May 29th at the BFI Southbank. All of these events are part of The Week of Fake News.

An important corrective to the historical record, Brazilian documentary reveals how the mainstream media fomented civil disorder in order to topple the left wing - on October 20th at the ArtHouse Crouch End, in partnership with Jeremy Corbyn's Peace and Justice Project [Read More...]