This Much I Know To Be True

The latest Nick Cave performance film was directed by Andrew Dominik, a long-time collaborator of Cave and bandmate Warren Ellis. Dominik and Cave have been friends since the 1980s, having met when Dominik was going out with Cave’s ex-girlfriend. Despite being somewhat wary of each other at first, they have ended up collaborating on many films directed by Dominik, including The Assassination of Jesse James (2007) and the upcoming Marilyn Monroe biographical drama, Blonde. Dominik had even done a performance film with Cave: One More Time with Feeling (2016), about the tragic death of his teenage son Arthur’s death, halfway through the recording of the album Skeleton Tree.

This film was something Cave wanted to do when he was unable to tour because of Covid. It is mainly performances of songs from Cave’s album with the Bad Seeds, Ghosteen, and Carnage, which Cave made with Ellis. The duo rehearse for the tour that they eventually did in late 2021. They work with a stripped-down band. Cave and Ellis both live in Brighton, which enabled them able to work together during the pandemic. The Bad Seeds are more of an international output so couldn’t come together during this period.

The songs are simply transcendental and moving. You get a good sense of the current live show and the relationship between Cave and Ellis, perhaps the most creative and fruitful of his life, although Ellis was a latecomer to the Bad Seeds. It’s almost like a buddy film, both during and between the songs. Cave always needs someone in his group from whom he can jump off. In the past it was Blixa Bargeld, with Mick Harvey in the background. As the band lineup has changed, so has the music. It is now more atmospheric than ever, the result of the collaboration between Cave and Ellis. 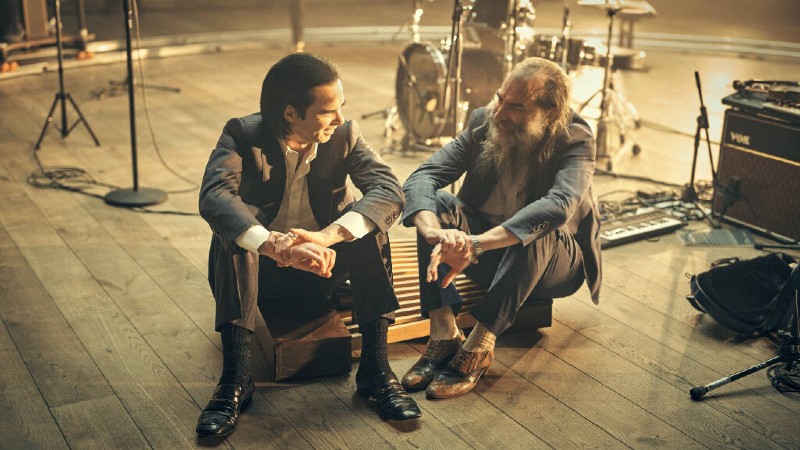 The chaos in Ellis’s house provide one of the film’s funniest and most awkward moments. His records are stacked in every corner of every room!

One More Time with Feeling was the most emotionally eviscerating of the two performance film. This Much I Know to Be True is more optimistic. The former is a film about grief. the latter is a movie about healing. The two would work very well as a double bill.

It’s also impressive that while Dominik stepped in to shoot it in the middle of making Blonde, but there’s no last-minute feel. It seems like Cave and Dominik have a music series emerging with these films. Dominik is on record saying this won’t be the last film with Cave!

Tragically, Nick Cave lost yet another son just yesterday. It remains sto be een whether his grief will once again be channelled into music.

This Much I Know To Be True is in cinemas on Wednesday, May 11th. On Mubi on Friday, July 8th.