"Filthy genius movie"
Teenage boy meets young woman and they embark on a number of adventures across California and New York, in Paul Thomas Anderson latest paean to the 1970s - on all major VoD platforms on Friday, April 1st

Paul Thomas Anderson’s hotly anticipated new movie is a simple boy-meets-girl tale, in the San Fernando Valley during the year of 1973. Anderson is a native and current resident of the Valley and has often set his films there including Boogie Nights (1997), Magnolia (1999), and Punch-Drunk Love (2002).

Gary Valentine (Cooper Hoffman) and Alana (Alana Haim) are the odd-couple leads. Hoffman is the son of the late Philip Seymour Hoffman, one of Anderson’s most frequent collaborators; Haim is from the pop band Haim, for whom Anderson has done several music videos. Gary is loosely based on Gary Goetzman, a child actor in the late ‘60s and early ‘70s, who later became a long-time collaborator of Jonathan Demme, and is now Tom Hanks’s production partner. Goetzman himself told Anderson some of the outrageous stories, on which the movie is inspired. The story revolves around following the couple’s adventures across the Valley, the strange people they meet, and their relationship, which may or may not become romantic.

Gary is a 15-year-old child actor at the cusp of aging out of such roles, as well as an unlikely hustler. Much of the humour in the film derives from Gary’s bizarre start-ups, including a waterbed and a pinball company. Very unusual endeavours, particularly for such a young entrepreneur. Gary meets Alana during school photo day, where she’s is working as a photographer’s assistant. He asks her out for dinner, and they quickly develop a friendship. She ends up as his chaperone in New York City for an appearance on a variety show featuring Lucy Doolittle (in an apparent reference to American comedian Lucille Ball). They come in and out of each other lives with the same question looming over the their heads: will they become romantically involved? The central performances are very natural; Hoffman and Haim have a bright future ahead should they decide to pursue an acting career. 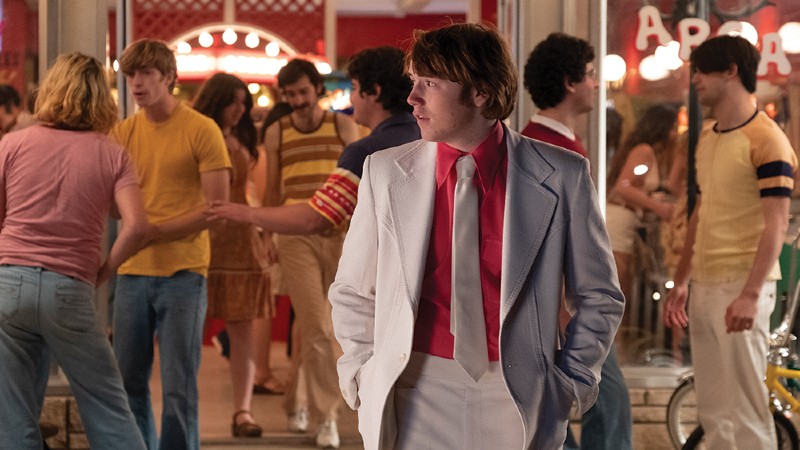 Cinematographer Michael Bauman shot the movie on textured 35mm widescreen. It looks like the film could have been made in the 1970s, some lost classic of freewheeling American cinema. It has a shade of Harold and Maude (Hal Ashby, 1971), with two misfits finding each other and bonding. It’s also very Altman-esque, with a large cast of characters who wander in and out of the action. This group includes Bradley Cooper’s unhinged portrayal of the notorious hairdresser-turned-movie producer Jon Peters, who likes to proclaim he’s “from the streets,” and Sean Penn playing a character called Jack Holden (a nod to actor William Holden:). Tom Waits appears as Rex Blau, a mix of Sam Fuller and Sam Peckinpah, and Bennie Safdie as real-life local politician Joel Wachs. Alana’s real-life family plays her family.

The backdrop includes the oil crisis of 1973. Gary and Lana have to drive a van down the hills of the Valley with no petrol, with Jon Peters lurking around, very much à la Sorcerer (William Friedkin, 1977). Interestingly, Licorice Pizza never features the record chain of the film the title, however incorporating the jaunty and carefree vibe of the decade when the now-defunct company thrived. The soundtrack is composed of big hits from the time, including the best usage of a the Doors song since the opening sequence of Apocalypse Now (Francis Ford Coppola, 1979).

Licorice Pizza is a lovely movie: deeply romantic and rip-roaringly funny, while also paying tribute to a bygone era. On all major VoD platforms on Friday, April 1st.