"Dirty gem"
Black Brazilian teen draws inspiration from the Black Panthers in order to wage a battle against his racist and reactionary high school - UK premiere at the BFI on Saturday, January 22nd

AA stigma towards authority and institutions is borne very early in our lives. We’re prepared for this during our formative school years, where we witness examples of ignorance and indifference, and a lack of attention to fairness by figures of authority. We see teachers carelessly assign blame, further victimising those students that are the genuine victims over the manipulative theatrics of bullies. These grim memories I’ve carried with me into my adult years, are resurrected once again, however, the context is wholly more complex in Cardoso’s school set political drama.

In this story, Saulo (Lucas Limeira), a student with strong convictions boldly confronts the system. He’s unwilling to be told what is right and wrong. When he’s told to leave the classroom after an altercation with an aggressive and abusive classmate, we see his actions, or rather protests, guided by his conscience. It’s a choice, however, that will have severe implications for the whole school, as he quickly galvanises support from his peers.

The spark that ignites the characters protestations, is one that many of us can identify with. As we watch Saulo’s protest unfold, we should think about how often we’ve lacked a voice and felt powerless? What makes A Bruddah’s Mind hyper-visceral, is the democratic agreement between the students and the staff that has guaranteed everyone a voice. This set of rules fails to deliver a fair resolution to this flashpoint of verbal and physical aggression. 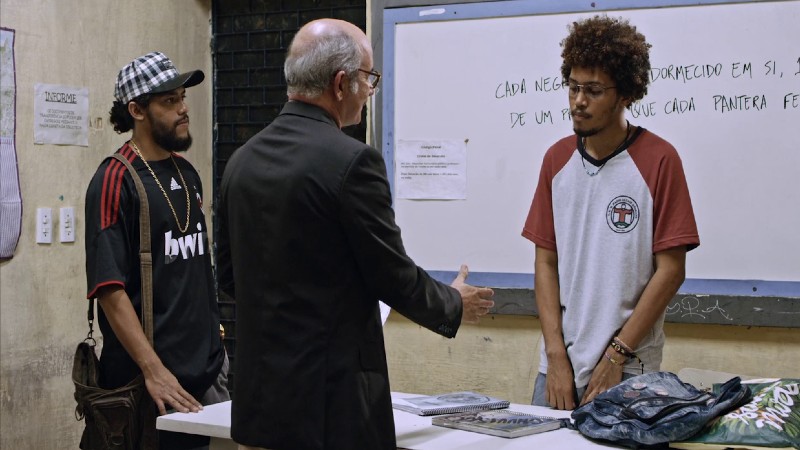 It has the potential to remind us how democracy doesn’t always empower, instead it’s controlled by the a few, in this case teachers and education authority, at the expense of the student body. It’s not a profound or enlightened statement to say that democracy is susceptible to manipulation, vulnerable to idealism, and is impractical in its execution. It’s an ongoing experiment, that each of us must fight for and contribute to. The strength of Cardoso’s seemingly simple film, is that it’s an impassioned voice, an advocate for protest, free speech, institutional, cultural and social transparency, but most importantly progress.

With its references to iconic Black Panther members including Fred Hampton, A Bruddah’s Mind reminds us about the importance of activism and political engagement, that future generations can draw inspiration from. The reference to Hampton, who was murdered in a police raid at his Chicago apartment, in December 1969, not only reminds us of this, but also the reality of the personal sacrifice protest and activism require.

As Saulo’s protest picks up momentum, we see the extreme aggression the teachers and police will resort to in order to maintain control. These are images that echo events from around the world, and while protest may be a core principal of democracy, it’s met with aggression by the authority it challenges. It’s a reminder that our basic rights must be fought for, regardless of whether we live in a democratic or non-democratic system, and institutions of power and authority must be challenged and held to account for progress towards a better democracy.

A Bruddah’s Mind premieres on Saturday, January 22nd at the BFI Southbank, as part of the African Odysseys strand, a screening co-hosted by the BFI and DMovies. Book your tickets now!