The Generation of Evil (Piktuju Karta)

Much of Lithuania’s national character and resulting cultural output is defined by their identity as an ex-Iron Curtain country. The results are often dour reflections on this occupation with little to recommend in the way of pure enjoyment (see Sharunas Bartas’s In The Dusk, from last year). This humbling precedent is dutifully acknowledged with an opening pre-credit show-and-tell classroom scene, whereby bored schoolchildren parade their rote family histories of warriors fighting for freedom under those USSR years. The sedate sequence is upturned dramatically as one child pulls a real police-issue pistol, signalling the intent of director Emilis Vėlyvis to pursue a different tone altogether.

The story almost completely rests on the shoulders of the commissioner Gintas (Vytautas Kaniusonis); a deeply corrupt professional and a flawed being, wherein machismo and infidelity war with prideful fatherhood. His obvious love for his son and somewhat plodding determination to see things through are his only redeeming features for much of the film. Whilst the antihero focus is a cinematic mainstay, here it erases some of the very real pains that the women in his life are forced to endure. A particularly triggering scene of violence and abuse, worse than the rest of the comically gruesome crimes on display, is brushed over as almost inconsequential. 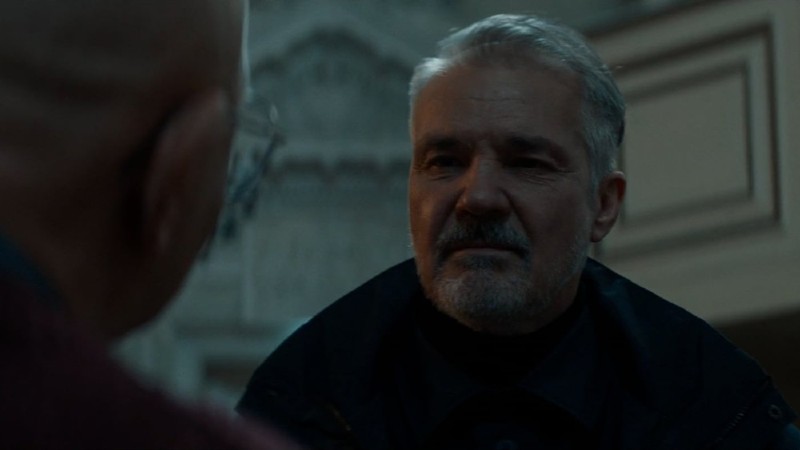 The Generation of Evil offers a Finche-esque thriller that could have been pulled direct from the ’90s – with all the pros and cons that entails. A morally grey police commissioner with political pretensions; a menacing, hooded figure released from jail; the inconvenient suicide of a prolific prosecutor; the resurgence of Soviet-era rubles as calling cards and the suggestion that a 30-year-old cold case from the end of the occupation may come back to haunt the present. It’s a heady shopping list of BIG thriller tropes that are competently strung together into a compelling thriller.

The otherwise competently suspenseful, digital score is let down at a key moment by a cornily jubilant fanfare that should have been relegated to the past millennium. However, you can’t deny that the overall package is fun and pacy, despite some niggle. At the opposite end of the reel, the story could do with a little more time to breathe in the opening act, as pivotal characters are barely introduced whilst the film barrels through its sequence of grizzly crimes. Perhaps the story could have been better served as a BBC miniseries. Flashback scenes of a grainy cinematographic texture are a nice way to leaven the grim antics of the modern day but could be fleshed out to a full episode, in order to understand the varied motivations of the principals.

If you can stomach some of the more distressing elements of the plot, The Generation of Evil is an unexpectedly pleasant way to spend an afternoon.

The Generation of Evil premiered at the 25th Tallinn Black Nights Film Festival.