"Dirty gem"
There are more things in needle and thread! Paul Thomas Anderson’s latest film is a dark and sumptuous drama set in Britain about a 1950s ladies’ dress designer and the two women behind his success. And an apparition! Now available on Digital

American director Paul Thomas Anderson’s first film to be set in England ostensibly concerns a ladies’ dress designer to the rich and famous in the 1950s. It moves between London where Reynolds Woodcock (Daniel Day-Lewis) works and the house in the country where he relaxes. It also moves between the obsessive, creative designer and his efficient, business-minded sister Cyril (Lesley Manville) and Alma (Vicky Krieps), the woman he meets and comes slowly but surely to depend on as his model, muse and partner. Beneath the surface, it’s about relationships, manipulation and control.

There’s also the two siblings’ long dead mother with whom Reynolds – basically a mother’s boy – is obsessed. So much so that, when he falls ill (possibly fatally), he sees her standing by the wall of his bedroom and speaks to her (she doesn’t respond). We know it’s her because of a photograph seen earlier: the apparition gives away no more information than the photograph. “Always carry it with you”, he tells Alma on their first date. He likes sewing things – photographs coins, messages – into clothing. His mother’s picture is sewn into his coat lining. 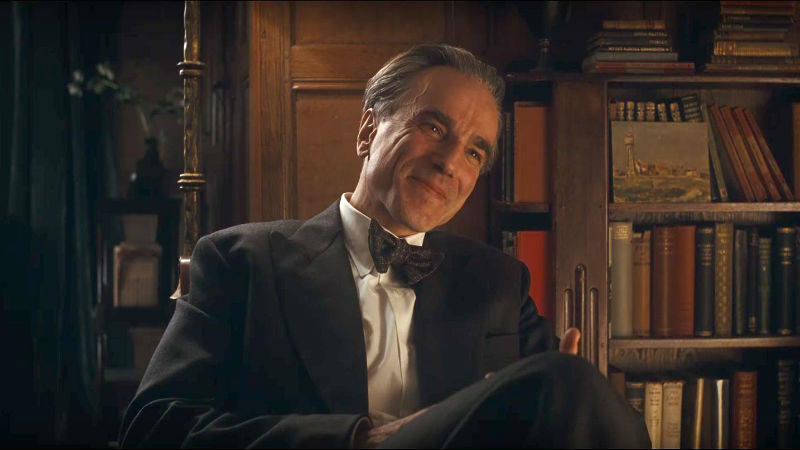 When I say first date… Well, Reynolds wines and dines Alma, a very ordinary waitress with a slight German accent who’s working at a small village hotel, then takes her back to his house in the country… so that he can try out material on her torso and start designing a dress for her. Later, he gets out his tape measure just in time for Cyril to turn up and write down Alma’s measurements as Reynolds calls them out.

The narrative parades a bewildering array of House of Woodcock clientele, from fans who would give anything to wear one of his dresses (swiftly dismissed from the Woodcock restaurant table by Cyril) to royalty with entourage, from a well-paying but ultimately self-loathing drunk to Alma the muse. Reynolds and Alma remove a commissioned dress from the drunk’s body as she sleeps her stupor off. “Not worthy of the House of Woodcock”, says Alma.

Also on show is the dress design, manufacture and modelling display process, complete with a team of seamstresses who, when Reynolds falls ill and collapses onto a dress, have to work late in order to repair it for delivery abroad the next morning.

By far the most interesting aspect of the film, however, is the interplay between the three main characters. Reynolds can be stubborn, telling Alma she’s making too much noise buttering her toast at breakfast which destroys the rest of his working day. Alma obsessively loves Reynolds and desires to have him and his time on her own terms. As such, she is more than his match. As too is Cyril. A power struggle between the two women is inevitable. Even more interesting, picking mushrooms in the country, Alma decides that the only way to get Reynolds under her control may be to poison him, something with which Reynolds, once he realises what she’s up to, readily complies. 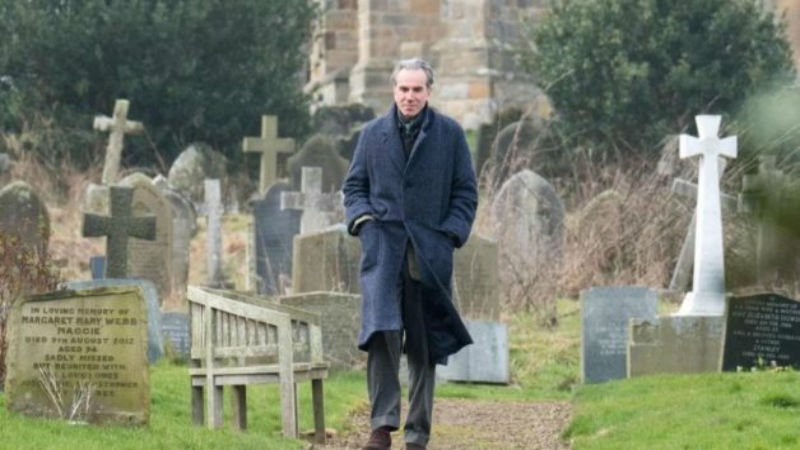 So although this has all the trappings of a film about fashion and clothes design (specifically dresses) and more than satisfies on that level, and while it’s also beautifully paced and photographed and boasts a fantastic period score by Jonny Greenwood of Radiohead fame, the film plays out less as a 1950s period costume piece and more as a drama about some very dark interpersonal subject matter indeed. It feels less epic than certain of Anderson’s earlier offerings (Boogie Nights/1997, Magnolia/1999, The Master/2012) and closer to his more intimate debut Hard Eight a.k.a. Sydney (1996) and his other Day-Lewis collaboration There Will Be Blood (2012). Hard Eight shows a lowlife US world and Blood a self-made man. However, Thread’s characters are most definitely English (or German immigrant in Alma’s case) and part of the circus surrounding and servicing the privileged classes.

We’d love to see Anderson dealing with something that gets under the skin of ordinary, non-privileged Brits rather than the well-heeled types so often portrayed in US and indeed British dramas. For now, though, the slow-burning Phantom Thread will do very nicely, thank you.

Phantom Thread is out in the UK on Friday, February 2nd. The film has received six Oscar nominations. On Netflix in January 2020.

This very unusual French ghost movie is a kaleidoscope of genres, references and nationalities, hardly comparable to anything you've seen before - on Disney + UK on Friday, July 22nd; also available on other platforms [Read More...]