"Mostly clean movie"
American indie horror about a mixed-race couple who fall prey to a mad scientist draws device from Jordan Peele's GET OUT, but never reaches the same heights - from Raindance

Basing a horror movie on real trauma is a tricky proposition; get it wrong and you risk looking cynical and insincere. The Welder is such a film, a social thriller that appears to be in it for the zeitgeist and not the zeal. Billed as “Get Out (Jordan Peele, 2017) meets Frankenstein”, it follows a young couple (Camila Rodríguez and Roe Dunkley) to deepest, darkest Florida to escape the memories of Eliza’s experiences in the army.

The de-stressing quickly turns to distressing when they arrive at the Everglades ranch and meet the creepy owner (Vincent De Paul), a former surgeon who is building something – and it isn’t suspense. David Liz has clearly seen mad scientist movies like Eyes Without a Face (Georges Franju, 1960) and The Island of Dr Moreau (Don Taylor, 1977), but he is unable to weld them onto the social issues of the day.

Its themes of racist violence and liberal retaliation are interesting enough but the link to the titular welder is tenuous at best, explained away in a single line of dialogue over a plate of haggis. Such attempts at dark humour fall flat, ham-fisted in its writing and distracting in the deployment of score and awkward camera angles. It makes the none-too-subtle Get Out look like a masterclass in understatement. 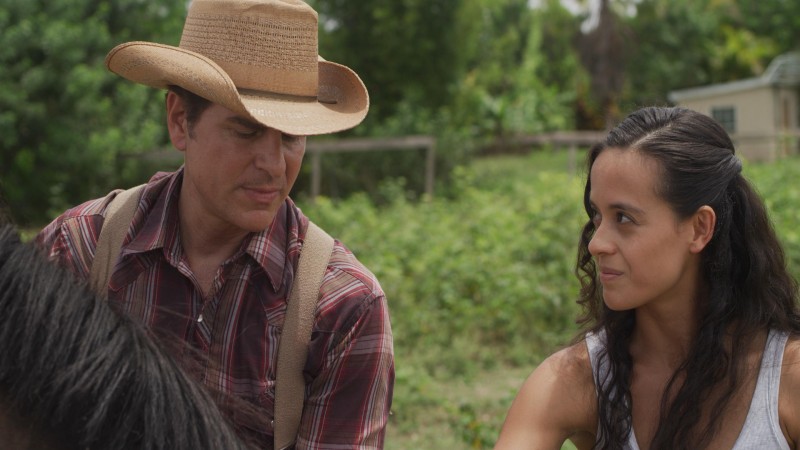 The promising idea of further exploring the experiences of mixed race couples in order to invert the Peele movie is consistently let down by clumsy writing, makeup effects and performances, particularly De Paul’s wooden baddie. The most convincing moment is when Dunkley says: “I’m really not good at acting scared.” Rodríguez fares best as Eliza, a dead ringer for Alicia Vikander in Tomb Raider (Roar Uthaug, 2018) with what should be a brighter future than this film indicates.

Eliza’s PTSD is referenced briefly at the start and forgotten about until the end, when it materialises in a way that only amplifies the sense that the filmmakers are using trauma without really caring. Compared to the taut atmospherics of last year’s narratively similar Honeydew (Devereux Milburn, 2020), The Welder is a flimsily constructed hodgepodge, as poorly assembled as its villain’s unconvincing creations.

The Welder premieres at the Raindance Film Festival: