The decision whether to believe in humanity or to despair with its fate confronts all of us. Director Drew Mylrea’s American dystopian thriller Last Survivors is a fitting film for our contemporary society. Drastic decisions have ripped apart the divisions that already existed, creating for some of us a sense of political or social isolation, propelling us into despair.

These anxieties are present in Last Survivors, that introduces us to Troy (Stephen Moyer), who has lived off-the-grid with his son Jake (Drew Van Acker) for more than 20 years. With the memories of the devastating war visceral and real, any trespassers on their woodland utopia are shown no mercy. Sensing his son’s growing curiosity about the outside world, he warns him of the dangers of the lurking marauders, and the need to strike first without remorse. However, when Jake happens across a beautiful woman Henrietta (Alicia Silverstone), the utopia Troy has built is set to unravel.

On the surface, Troy is an echo of primitive strength, self-sufficient and living off the land. Over the opening scene, Jake’s voiceover tells us, “There are those who are prepared for opportunities and set backs, and those who are not. Luck doesn’t exist. After the wars it was very obvious who was prepared and who wasn’t. Man had fallen far away from his primitive roots.” In a world flirting with catastrophe, the film poses us with the question whether we’re ready, and are we out of touch with our primal nature?

We should be cautious of the narratives we create for ourselves and those told to us by storytellers and their characters. Underneath this display of strength, Last Survivors is a story about mental and emotional fragility, and the rabbit hole that lays beyond the survival instinct and self-reliance. It’s a story about trauma, and the way the mind uses coping/defence mechanisms that allow us to survive.

If film can be compared to magic, then Mylrea uses smoke and mirrors to misdirect his audience. It never feels that it cheapens the overall narrative, rather it helps to build a considered story as its themes and ideas gradually emerge. He almost answers the errors of M. Night Shyamalan’s The Village (2004), by knowing how to use a revelation to serve the story, to evolve it as opposed to be a surprise that goes nowhere. 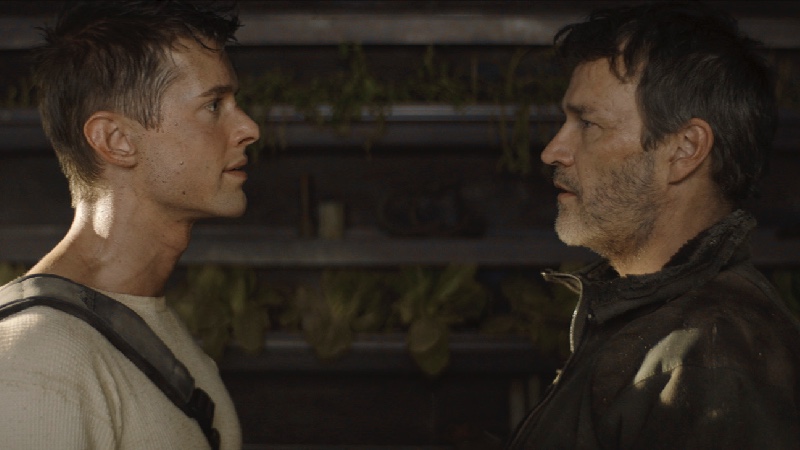 It’s important that Mylrea uses the point of identification with Troy’s memories to expose our impulsive vulnerability to identify with a character. By doing so, we are closer to Jake’s experience of discovering an alternative reality than the one he has grown up believing. The themes and ideas resonate not only intellectually, but with a visceral emotion as we join Jake on his journey narrative, a coming-of-age that sees him learn about himself and his world, stepping out of his father’s shadow. Last Survivors is a dramatic story, however, its roots lie in a right of passage that we all experience. Mylrea frames storytelling as an exaggerated version of reality.

Troy talks about not filling one’s heart with hate, and yet his heart is filled with fear. The story explores the connection between fear and traumatic memories, and how it fills someone’s heart with hate. Troy’s rhetoric evolves from one fuelled by a distrust and fear of others, a survivalist mindset, to a misogyny. This feeds into the theme of nature versus nurture.

Misogyny is a form of violence that’s both cultivated, and a response to destabilising experiences on the psyche, but it’s not something we’re born with. It can be caught up in the tangled ways we process memories and respond to experiences, but at its worst, it adds fuel to our patriarchal culture.

Troy’s ambivalence reminds us how blinded we are to our internal selves, lacking a self-awareness that makes us susceptible to fear, other negative emotions and experiences. Jake’s battle between his nature and his father’s nurturing influence is representative of free will to shape ourselves, against the fierce forces of our surroundings, people and events that try to mould us. It positions each of us as having our soul fought over. For Jake, his father and Henrietta are those conflicting forces, moulding Last Survivors into an unorthodox love triangle.

Jake’s relationship with Henrietta drifts into cliché, but if Mylrea were to omit these moments, it would disavow the yearning that she speaks about. We may wish to retreat from society, but that doesn’t mean we don’t desire a human connection. Opposite Troy, her story brings a nuance to the drama. Both want to escape and create a space for themselves, but she is conflicted between hope and despair, that nurtures Last Survivors into a sensitive evocation of thoughts and feelings that binds us all.

Documentarist get skin-crawlingly close to three alt-right figureheads, revealing how their white supremacist views moved from the fringe to the mainstream - from Raindance [Read More...]

The "most hated man in Britain" is never afraid to be the first on the frontline in struggle for LGBT+ justice and equality - explosive doc is on Netflix [Read More...]

Michael Caine is a cranky writer on a tour from hell, in Canadian drama effusing a delightful charm and reminding us to never judge a book by its cover – opening the Raindance Film Festival 2021. [Read More...]