"Dirty gem"
A jungle cruise turns upside down in more ways than one, in this psychedelic eco-horror from South Africa - in cinemas on Friday, September 24th

You may have heard of jungle horror, this is a rare case of fungal horror; a South African eco-fable that immediately subverts our expectations and keeps on surprising for the full 90 minutes. When forest ranger Gabi (Monique Rockman) gets lost in the woods and abducted by a pair of liver-eating locals (Carel Nel and Alex Van Dyk), what looks to be another tale of survival or “hillbilly” horror turns into a potent brew of psychedelia, nature and armageddon.

Opening with a striking upside-down shot of a canoe heading downriver, Gaia avoids demonising the forest-dwellers à la Deliverance (John Boorman, 1972) and has them show kindness to Gabi – despite some patronising behaviour on her part. There unfolds a captivating Onibaba-style (Kaneto Shindo, 1964) three-hander as the trio hole up in a shack, battling strange sexual urges, delirious jungle dreams and a particularly nasty fungal infection. 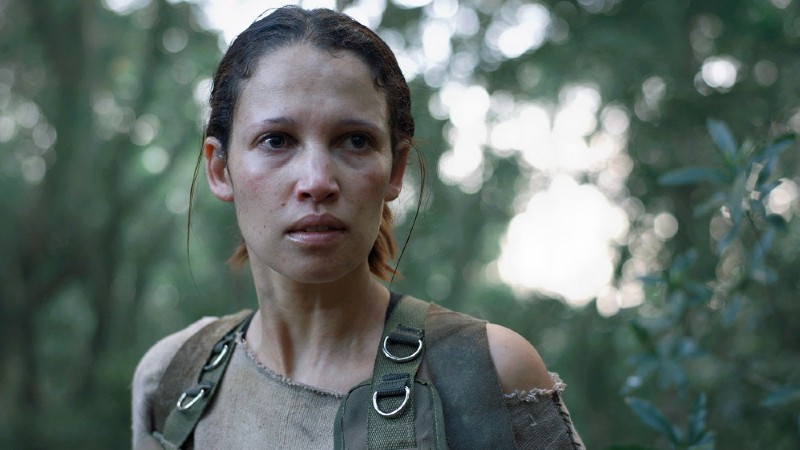 Largely underused in the genre, fungus is eloquently exploited here for its alien qualities and millenia of mystery, toxicity and spirituality. Jaco Bouwer’s psychotropical visuals are spellbinding, capturing floating spores and colourful body horror in photoreal quality, as well as filming action in the naturalistic darkness without losing clarity; a lesson that Hollywood horror movies would do well to absorb.

Intense performances, writing and music make the film fully intoxicating, alongside clever creature design which perfectly fits the environment that spawned it, adding to the impressive realism. Beneath the immediate story of survival lurks a mysterious depth, all manner of interesting themes creeping in around the edges; colonial, ecological and apocalyptic. Wild and alive as an uncharted forest, Gaia is an original and daring picture without mushroom for improvement.

Gaia premiered at FrightFest. In cinemas on Friday, September 24th.