"Dirty gem"
Genres collide in this paranoid, pacey picture about a grief-stricken video archivist, loosely based on true events - in cinemas on Friday, March 25th

Inspired by the unsolved mystery of an interrupted broadcast of Doctor Who on a Chicago TV channel in 1987, Broadcast Signal Intrusion asks what the hijacker’s bizarre message might have meant. James (Harry Shum Jr.) is a video archivist in Chicago in 1999 who becomes obsessed with these interruptions and follows the broadcasts down the rabbit hole, in a weird and wily thriller spawned in the collision of Videodrome (David Cronenberg, 1983) and The Matrix (The Wachowskis, 1999).

Born out of FrightFest’s ‘New Blood’ initiative, Broadcast Signal Intrusion mines the recesses of cult TV and analogue phenomena to chilling effect. In a delightful display of deadpan humour, James discovers another pirate transmission took place during an episode of a sitcom from the ’80s about an android wife called Sal-E Sparx. He sets about deciphering the patterns he thinks he sees with the help of his accomplice Alice (Kelley Mack), who adds a youthful energy to the stylish, spiralling storyline.

Tim Woodall and Phil Drinkwater’s surprising script spans a heady mix of genres: conspiracy thrillers like All the President’s Men (Alan J. Pakula, 1976), the tech-noir of The Terminator (James Cameron, 1984) and the video-based J-horror Ring (Hideo Nakata, 1998) to name but a few. What’s impressive is how director Jacob Gentry fuses these influences into something original and cohesive, surpassing his conceptually similar The Signal (2007) both narratively and visually. 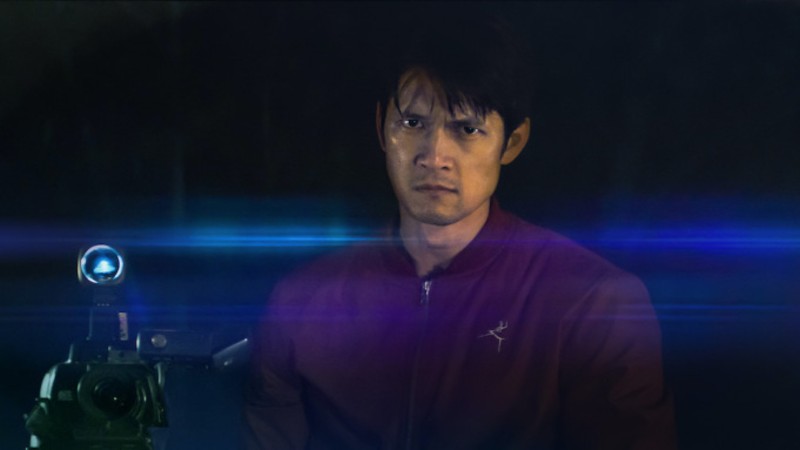 When so many flicks are harking back to the 1980s for their design cues, it is refreshing to see one so strongly harness the look of 1999 movies such as The Matrix and Fight Club (David Fincher, 1999) to establish its arresting atmosphere. Cinematographer Scott Thiele brings a greenish hue and Asian aesthetic to the seedy underbelly of Chicago, the jazzy, noirish score by Ben Lovett making this a great film in which to quite literally lose oneself for 100 paranoid minutes.

The creepy, ambiguous air and freaky, twisting plot get right under the skin; an intriguing intrusion that bends the mind as well as genre. Well acted, wonderfully paced and woozily directed, this is an extremely welcome broadcast interruption, like when a cat wanders into a Zoom interview on the news.

Broadcast Signal Intrusion premiered at FrightFest, when this piece was originally written. In cinemas on Friday, March 25th.