"Dirty gem"
Two single mothers share a maternity room, in one of Almodovar's most thoughtful, profound and mature works to date - in cinemas on Friday, January 28th

Pedro Almodovar has had a fascinating arc. From the early punk days as the enfant terrible of the 1980s to the cinematic poet laureate of Spanish cinema, he has at once managed the difficult balancing act of maintaining consistent levels of quality and a coherent personality while at the same time evolving, changing and dare I say it – maturing? His latest Parallel Mothers opens the Venice Film Festival this year and is one of his most accomplished films to date.

Penelope Cruz stars as Janis, a successful photographer who following a tryst with Arturo (Israel Elejaide), a forensic anthropologist, finds herself pregnant. Knocking on the door of 40, she decides to keep the baby and finds herself sharing a maternity room with Ana (Milena Smit), who is at the other end of the demographic. The two mothers will share some of the same troubles. They are both single mothers whose situations are somewhat cushioned by their upper middle class wealth. But an au pair can be feckless and a mother fickle but there are twists to come and tragedy as well.

And yet as much as Almodovar enjoys the kind of daytime soap aspects of melodrama, here there is a depth. Partly this is due to what seems like a forgotten subplot but is later exhumed to great emotional effect. This is the role of Arturo – remember the forensic anthropologist? He has volunteered to help organise the excavation of a common grave outside of Janis’ village where family members were taken and shot by their fascists during the Civil War. The film seems to forget this as Janis’ relationship with Ana deepens and complicates. But the way modern melodrama can erase past tragedy is precisely the point of the film. Ana herself with her youth, her family background and her own trauma isn’t guilty of forgetting, she simply never knew. In the same way she doesn’t know who Janice Joplin – who Janis was named after- is. 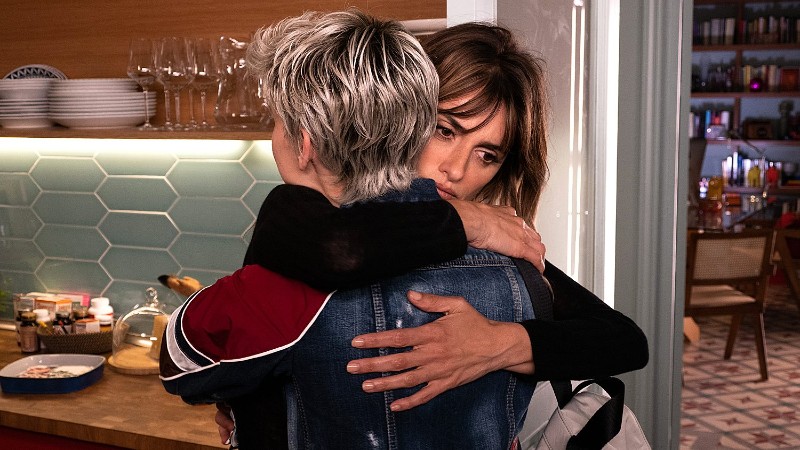 Milena Smit’s performance is beautifully raw, a child becoming a woman, recovering from what Philip Larkin called her ‘wrong beginnings’, and having to learn how to live as well as survive. Cruz, by contrast, plays Janis as a confident woman, who wishes to unearth her past so that she can put it to rest. This is not for her some sort of personal exorcism so much as doing what is right and bringing the truth to light. In Cruz, Almodovar has found his muse, an actress who doesn’t just inhabit his universe, but to a large part creates it.

That universe is gorgeous; full of Jose Luis Alcaine’s bright primary colors, the reds and greens. His camera embodies a sweepingly classical romanticism, full of grace notes: winding through a street in Madrid to find a white curtain billowing from a window, accompanied by Alberto Iglesias’s orchestral score that always hints that things might go and little bit Hitchcock before too long. But this isn’t an experiment in genre, like The Skin I Live In (2011). It’s a work that despite the twists of its narrative conceit remains fundamentally true to its core concerns: the true nature of family and the true value of the past. These are concepts and words co-opted by the right wing under the guise of family values and tradition, but Almodovar snatches them back on behalf of history and love. It is one of his most mature works: thoughtful and profound and, at its conclusion, genuinely moving.

Parallel Mothers premiered at Venice in 2021, when this piece was originally written. In cinemas on Friday, January 28th.

Pedro Almodovar toys with language in featurette adapted from a monodrama by Jean Cocteau, and with Tilda Swinton at the helm - on Mubi on Friday, July 23rd [Read More...]

Pedro Almodóvar bares his soul in his most personal movie yet, about an ageing and ailing filmmaker searching for inspiration inside his own frail existence - now available on VoD (on Mubi in June/July) [Read More...]