Social media has been a subject of many American stories, from the pressures of online popularity to celebrity obsession gone awry. Ayten Amin’s drama Souad, however, brings our connected lives into a new location, and a new context.

The story is set in one of Egypt’s Nile Delta cities, a place where religious tradition finds itself clashing with technological revolution. This conflict is embodied in Souad (Bassant Ahmed), a young woman struggling to balance two sides of herself. With her friends and family, she maintains the conservative values expected of her. Behind closed doors, she fabricates an image of herself that she deems far more interesting and exciting. This extends to an online relationship with Ahmed (Hussein Ghanem), a charming and popular poster, with whom she has passionate exchanges over social media.

The pressure of balancing the need to conform with the need to express herself becomes too much for Souad, and tragedy strikes. It is left to her 13-year-old sister, Rabab (Basmala Elghaiesh), to put together the pieces of what happened, using her phone and a meeting with Ahmed to get some sense of the sibling she has lost.

Amin’s debut feature uses first-time actors for its cast, a different perspective than one might expect. This is not a diatribe against the evils of social media, or the suppression of religious communities. The camera observes all truths – religion is shown to be a source of strength for many characters, even if it adds pressure to the life of Souad. Equally, the phone that seems to permanently illuminate her face offers both joy and misery in equal measure. How the story gets to where its going is straight-forward, but the ‘why’ is allowed to be more complex. 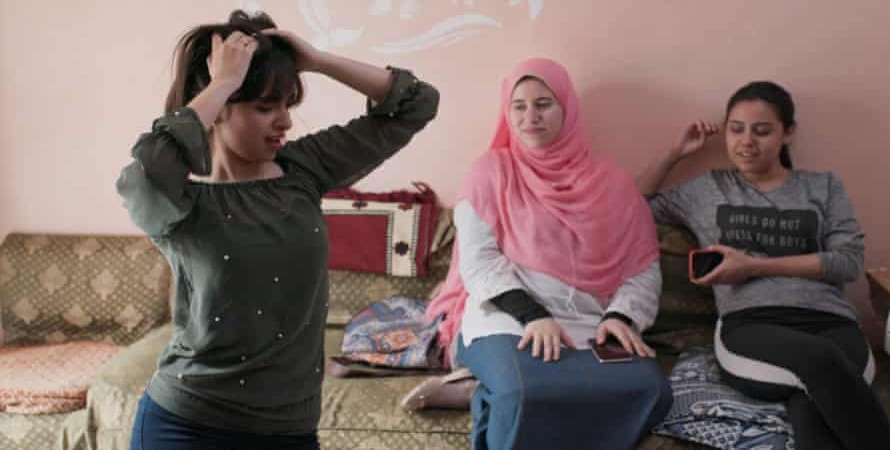 Suicide is an inherently harrowing subject that is difficult to portray in a way that doesn’t risk sensationalising an awful event. Here, Souad’s death comes as sounds from ‘another room’. The car horns and noise from the city below suddenly broken up by faint screams of horror, which aren’t immediately obvious to Rabab in the kitchen, but create a sense of dread in the pit of the viewer’s stomach. Then, as she returns to piece together what happened, the sound muffles, and we cut to a scene signalling that this is now Rabab’s story.

An impactful moment midway through the film that jerks us away from the everyday flow of the storytelling. It’s now an emotional post-mortem, more about understanding than blame. The young star of the film takes the reigns as she observes adult behaviour with a mixture of curiosity and disdain. The simple but devastating performance is summed up with Rebab throws two coins in a wishing well and makes two wishes: that her sister goes to heaven, and that she never falls in love.

Prior to the mid-film shift, Bassant Ahmed does a wonderful job of conveying the inner conflict without resorting to melodrama. The pressure is always simmering in her, only occasionally bubbling up when rumours about her are brought to light, or when emphasising the strength of her faith to those who question it. Hussein Ghanem displays the other side of the coin as Ahmed. A modern man who has more space rebel against society, the consequences of his bravado only become clear once Souad is gone. As before, highly emotional moments have a veil drawn over them – as Ahmed reveals the nature of his relationship to Rabab, his words are drowned out by a call to prayer.

Those looking for a powerful statement may be frustrated by Souad’s refusal to judge. However, a lack of conclusion is also a sign of its authenticity. Life is complicated, contradictory, and in some cases dirty. Souad doesn’t turn away from that, and is all the better for it.

Souad is in cinemas on Friday, August 27th.